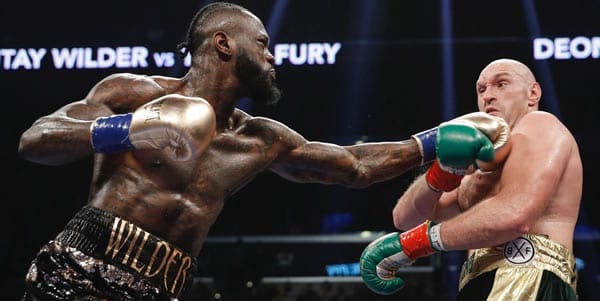 Boxing prop bets are bets within a fight. In other words, the main bet is who is going to win the fight. But within that framework are any number of different events that you can try to predict. The bigger the fight—the more things you can bet on. And with Deontay Wilder vs. Tyson Fury II being one of the biggest heavyweight championship fights in years, the choices are many.

This isn’t about picking a winner. You’re going to have an idea of who you might think will win the fight. In this article, we are merely singling out the prop bets we think have the best value, and that goes for both sides of the equation. You might want to put your eggs all in one basket. And maybe there is something to be said for that, as you don’t want to make bets that contradict themselves. But with some of the potentially-rewarding odds of some of these props, we like to take a few different positions. Here are some of our favorites for the Wilder-Fury rematch.

Pick: Goes distance. Sure, both men are promising knockouts. Wilder backers might feel that their man can put Fury down and keep him there this time. But the combination of both men’s durability, in addition to their mutual respect and the high stakes of the fight, could give way to a similar bout where they see the final bell. In the first fight, we saw Fury walk through Wilder’s power, and the champion’s chin might be the most underrated part of his repertoire. When the bell rang to end the fight, both had something left.Y

BET THE WILDER/FURY FIGHT FOR FREE BY TAKING ADVANTAGE OF A 100% REAL CASH BONUS FROM $100 TO $300 AT MYBOOKIE! MUST USE THIS LINK TO REGISTER!

Pick: Wilder inside distance. This might contradict the last pick, but this is more for bettors who fancy Wilder. The cards were close last time, and that was a “travesty in justice”. If Wilder wins, it seems like it would very likely be inside the distance. Locking in a +145 quote for Wilder to win inside the distance isn’t a bad value. He almost did it the first time.

Pick: If looking to get some better value on Fury to win the fight, betting on him to win by decision at +150 has some appeal. After all, judging incompetence aside, this is really how the first fight should have ended. Never at any point in the first fight did it appear that Fury was in a position where he can stop Wilder so if you like Fury, this could be a nice option.

Pick: Let’s face it, the prospects of the biggest heavyweight matchup in years ending up a draw for a second time is unsettling. All that work and such little resolution on who the best is. And while the first fight shouldn’t have been a draw, one could see how these two mesh in such a way to make a draw verdict perhaps a greater possibility than 20-1. With Fury winning rounds and a few knockdowns from Wilder, we could find ourselves in the same boat.

Pick: I think maybe taking a more-extreme stand in at least one of these bets could have some upside. Time and again, the rematch after a close fight breaks loose early. Wilder knows the boxing lesson he received last time and how much harder it was to time Fury when he got into a groove. One could see Wilder making a strong early move in an effort to bypass all that. In their last round together, Wilder had Fury down and almost out and might be looking for a continuation of that early in the rematch.

Pick: Any other result. We got one for you extreme chalk hunters, the type of bettor who doesn’t mind laying down over a grand to pick up a couple of extra hundred for a Costco run. In this bet, all you have to do is fade a 4-round range in the middle of the fight.

Pick: Then again, we saw Wilder turning on the heat in the second half of the fight last time. If taking Wilder early in the fight is too extreme of a stance, getting him at +300 to win at any time in the fights’ latter half might be a more comfortable wager for you. After seeing Wilder’s power surface in the latter half of the fight last time and just noting how well he carries his power late in fights in general, a Wilder backer could find this one appealing.

Pick: At 17-1, I like this as the best more-extreme Fury stance to take on the fight. With a fighter whose best chance appears to be a 12-round decision, one is less likely to look off the grid for more exotic stances to take. But if Fury were to score the improbable stoppage, this time period would appear to be the best candidate. Wilder could empty his guns going for a KO against the resolute Fury. Or maybe Fury will have some tough early moments and need something dramatic late. Either way, at this number, it’s not that crazy. To read Loot’s take on who will win this fight go here!

Find all these prop bets AND MORE at 5Dimes Sportsbook!