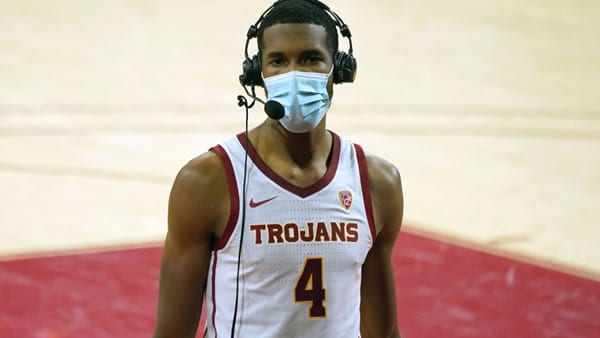 USC is closing in on winning the Pac-12, while Arizona State gets its chance to try to spoil the party. The Trojans have been the rare freshman-led team that has actually done well in the COVID era, as having a pair of Mobley’s in the low post has given USC an edge that few if any Pac-12 squads can match up against.

Arizona State knows that better than just about anyone because the Sun Devils found out the hard way just how difficult it is to match up with the Trojans in an 11-point loss to USC in Tem-pe. The Mobleys both managed a double-double in that game, and the Sun Devils didn’t shoot anywhere near well enough to offset that edge.

Arizona State is quickly running out of time to make itself a factor in the league and is just try-ing to set itself up for the Pac-12 tournament and its final shot at making the NCAAs. That could make the Sun Devils dangerous as they try to use these remaining games as preparation for their last shot at making it into the tournament. Can they upend a USC team that’s won its past six games and really throw the league into chaos?

Balanced scoring was a big part of Arizona State’s gameplan against USC in the first meeting, as the Sun Devils chose an interesting strategy to combat the Trojans’ size advantage. Instead of trying to thwart the Mobleys down low, Arizona State ceded the rebounding to USC and tried to focus on hitting shots, similar to the way former ASU coach Herb Sendek’s teams did when Sendek coached North Carolina State.

The plan didn’t come close to working because the Sun Devils couldn’t hit desert from 20 feet in the first meeting. Remy Martin and Josh Christopher are not great outside shooters, and they’re not tall enough to create their own chances by virtue of a rebound. As such, the only way Arizo-na State is going to win in a situation like this is by hitting shots regularly, and that’s not one of the Sun Devils’ strengths. ASU ranks ninth in the conference in field goal percentage and has the lowest total of made field goals in the Pac-12. Whatever Bobby Hurley is telling his team to do right now, it isn’t working and hasn’t worked all season.

Andy Enfield really doesn’t have to overthink this one: find a way to get the ball to Evan and Isaiah Mobley, let them go to work inside, and don’t turn the ball over. SC has mostly followed the first two parts of this, but the third leaves a little to be desired. Against Washington State, the Trojans could have given the game away with 16 turnovers if their competition had been better than that of the Cougars.

The big question is whether Tahj Eaddy can continue the form he showed against the Cougars. Eaddy exploded for 29 points in that game, in large part because Washington State was so focused on the challenge of the Mobleys that the Cougars paid little attention to the senior guard. Arizona State shouldn’t make that same mistake, in large part because the Sun Devils know they do not have the personnel to play low and would be better off going after the perimeter. If Eaddy makes wise decisions with the ball, this is SC’s game to lose.

Rebounding. Just how big will the margin get? Last time out, it was 50-30 in favor of the Trojans, and I wouldn’t be surprised if we saw something similar this time. In practice, ASU actually got more attempts from the field than USC did, but the Trojans got a higher quality look and got to the free-throw line far more often than the Sun Devils (26 makes for SC to 24 attempts for Arizona State).

Arizona State does not have the personnel or depth needed to hold off the Mobleys and their size, so the best thing that the Sun Devils could do here is to either hit most of their shots or create longer rebounds that they actually have a chance to track down. If the rebounding battle is another simple affair, the game probably will be as well, and it likely won’t be to ASU’s benefit if that occurs.

Arizona State will Cover If: The Sun Devils can force at least one of the Mobleys into foul trouble. These are not deep teams, and losing even one part of their equation can have devastating consequences for their team’s production. In the case of the Mobleys, both are so important to USC that if one of them ends up on the bench with fouls, there’s a very real chance that the Trojans don’t know how to adjust. ASU needs to be aggressive and draw fouls early.

The Trojans take control of the glass. Winning the rebounding margin by such a large edge allowed SC to mask its lack of depth and use the whistles to its advantage in the first meeting. The Trojans are good free throw shooters, so if they can simply create good looks for themselves by grabbing rebounds, they’ll have the edge.

Arizona State comes into this one slumping, having lost three of its past four games, and the Sun Devils just aren’t showing any signs that they can compete with a squad of USC’s caliber, even if they are still playing with a stronger effort than most teams give.

SC has been tough to beat all season and now gets to host in a game that it absolutely needs in order to keep its stranglehold on the Pac-12 lead. This seems a good matchup for the Trojans against a team they’ve already beaten once, and if the Mobleys are able to get going inside, SC should control the game from the opening minute. This is a lot of points for this situation, but I think it’s worth the gamble here. Give me the Trojans to cover.