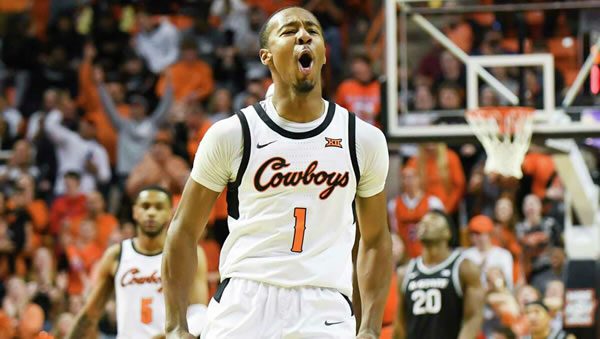 Unlike last year, Oklahoma State might have dug the hole too deep to charge into the field with a late push. The Cowboys have made a habit out of doing this in recent years: struggle through the nonconference games, pick it up in the second half of the season based on getting big wins at Gallagher-Iba and build from there. But the equation doesn’t work this time around because not only have the Cowboys waited too long, but they never got the road wins they needed to balance out the early struggles.

But that said, Oklahoma State remains incredibly difficult to defeat in Stillwater. The Cowboys are 5-2 SU at home in Big 12 play and have won three straight at home in the league. Out of seven league games at home this year, only Kansas managed to get a win over Oklahoma State without having to go to overtime to do it. That could be a problem for a Baylor team that is both dealing with injuries and has not played particularly well as of late outside of Waco. The Bears have dropped three of their past four on the road, and although all three are understandable setbacks to Texas Tech, Kansas, and Alabama, all of them happened against teams with home advantages similar to that of Oklahoma State. Baylor has already seen Kansas and Texas Tech pass them in the race to get one of the two NCAA subregionals in Fort Worth, and if the Bears aren’t careful, they could find their top-four seed disappearing entirely.

Most basketball teams have one or two injuries at most at this point in the year. Baylor’s injury list reads more like an SEC football team, as four players are missing time for reasons not related to COVID. Of the four, only Adam Flagler has a chance to play, as Jonathan Tchamwa Tchatchoua and Langston Love are out for the season, and LJ Cryer is down until at least the end of the month.
And still, Baylor is finding ways to both score and win. The Bears have only had one game out of their past seven in which they didn’t reach at least 75 points, and they’ve shown they can still win without their stars in beating Texas and TCU. But they haven’t yet shown they can do it on the road, losing their first game without Cryer by 10 to Texas Tech. It’s impossible to tell anything from that game, considering that nobody has beaten Texas Tech in Lubbock all year, but the Bears still have that shadow over their heads as they head into this trip.

Is it inconsistency or poor play on the road that has dogged Oklahoma State this season? In either case, the Cowboys haven’t strung back-to-back wins together since beating Baylor in Waco and handling TCU at home. That win over the Bears is one of just two on the season on the road and the only one that’s taken place outside of the state of Oklahoma.
But the Cowboys have been rock-solid at home, and what’s more, they’ve put up points at home. Oklahoma State has hit 80 in three of its past four home games, with the lone exception being a 64-55 win over rival Oklahoma. Oklahoma State showed it could win without scoring when it held Baylor to 31% from the floor in Waco, but it certainly won’t hurt if Avery Anderson finds his touch in this game. He didn’t do much of anything in the first meeting, but neither did the Baylor stars. The difference is he’s projected to be on the floor here.

Baylor will Cover If: The Bears can keep the points coming. Baylor played well in its most recent game and found a way to win without its big guns. A team can pull together in the absence of a star (Duke’s 2015 NCAA title run comes to mind), but it’s anything but easy to do. The Bears need to get the offense going early.

Oklahoma State will Cover If: The Cowboys can take the issue right at the Bears. Baylor isn’t a very foul-heavy team anyway, but the Bears will be desperate to avoid foul trouble with only seven bodies in the rotation. If Oklahoma State can either force timid defense out of Baylor or draw a few fouls, it will have the edge.

Baylor isn’t going to want to see a ton of shots in this game. The Bears don’t play all that fast anyway, but with only seven in the rotation, they’ll want to take their time with their shots and gamble that they can hit a few more than Oklahoma State. That leads us to an Under.

Baylor hasn’t yet proven it can play on the road without its big guns, as the last time it tried, it got tripped up by Texas Tech. Everyone loses in Lubbock, so we really don’t know what Baylor is capable of doing in Stillwater. We do know Oklahoma State has played very well here and seems to still want to give its fans a show. Give me the Cowboys and the points. Note: Do yourself a HUGE favor and take 3 minutes to learn about the benefits of betting on games at reduced juice! You’ll be so glad you did!