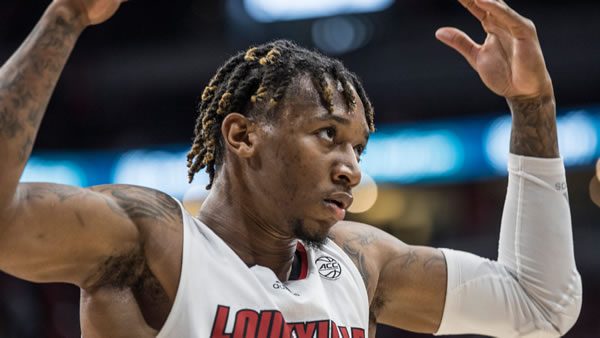 Say this for Louisville: The Cardinals are at least remaining competitive. Louisville has had every reason to pack it in after Chris Mack’s firing, but the Cardinals have stayed within single digits of five of their past six opponents, including a win over Clemson. The Cardinals have just two covers in their past eight games, but that’s also because they’ve been facing relatively small lines and haven’t seen a line anywhere near double digits all season.

That could be a bit of an overreaction to North Carolina’s recent performance, as the Tar Heels came up with their best showing in a month in beating Virginia Tech. The Heels were a bit more lucky than good in that game, as they relied heavily on the Hokies missing shots but still came out with an eight-point victory. This is a situation where Carolina has to have this game, not because of what it can do for its profile but because of how damaging a loss would be. Regardless of Louisville still fighting hard on the court, the Cardinals are still a sub-.500 squad, and this game is in Chapel Hill, making a loss incredibly devastating to the Heels’ NCAA tournament hopes should it occur.

The last time these teams squared off, El Ellis came close to stealing the show for Louisville. In a way, Ellis perfectly encapsulates both the best and worst of Louisville basketball this season: the guard has been as inconsistent as his team this season, sometimes finding his way to scoring 25 points to lead the Cardinals and sometimes finding his way to the bench.

The loss to Carolina was the former, but Ellis couldn’t really get much help other than from Matt Cross, who pulled down 15 rebounds and added 13 points. The problem is, hitting 15 3-pointers really isn’t a sustainable strategy, and it’s not likely to repeat itself given that Louisville shoots closer to 30 percent, not 40 percent, from behind the arc. If the Cardinals are hitting from deep, they can absolutely cover this number, but long rebounds do not bode well for Louisville here.

When your starters are as effective as the Heels mostly were against Louisville, you don’t really need to reach deep into your bench. The five Carolina starters scored all 90 of the Heels’ points against the Cardinals last time, and it could have been much worse if Caleb Love hadn’t suffered through an awful shooting night and gone 3-for-18 from the field.This time around, the Heels should be able to shoot a little better and set themselves up to get quality looks at the basket. They’ll rely heavily on their rebounding edge to get easy baskets, especially after Armando Bacot ripped down 22 in the most recent meeting. As long as deep rebounds aren’t a part of this game, the Heels are in good shape.

Louisville will Cover If: Either Ellis or someone else takes over the game and keeps North Carolina from eating away on the offensive glass. The Cardinals have been sticking around when they face decent to good teams, and their effort will show up in the stat.

North Carolina will Cover If: The Tar Heels get more out of Caleb Love. The Heels didn’t shoot well at Virginia Tech, but they have been much more a home-court hero than an actually good basketball team. This team can put things away by choking off second chances; it’s now just a matter of grabbing enough rebounds to do it.

These teams put up a combined 141 shots last time they faced each other. There’s a very good chance that they’re going to keep playing fast and pushing the tempo from start to finish. The over holds a lot of promise in this one.

North Carolina really didn’t play all that well in the first meeting but still emerged with both a win and a cover from its trip to Kentucky for the first meeting. The Heels have far more to play for, and if they’re on, they can really hit the gas and leave Louisville in the dust.

Louisville has been tough to go against as an underdog, but I think it happens here. Give me Carolina to get some momentum building. Note: Do yourself a HUGE favor and take 3 minutes to learn about the benefits of betting on games at reduced juice! You’ll be so glad you did!