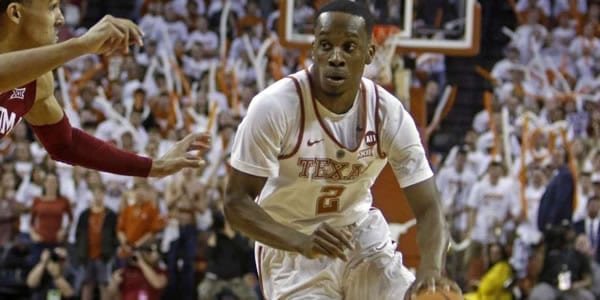 Baylor has to be the one team in the country that doesn’t want to see Oklahoma State again. Thankfully, the Bears are out of meetings with the Cowboys after getting their second win against the one team in the league that’s actually figured out their defense, and they can now focus on an opponent that they held to just 44 points when the sides met in Waco.

The big question here is how long Baylor can handle the pressure of being No. 1. The Bears have never been in this situation before this year, and they’ve struggled at times with getting everyone’s best shot. Kansas State was able to have success against the Baylor defense, and that’s a real cause for concern because if Baylor isn’t stopping opponents, it’s not going to be No. 1 for very long. As good as Jared Butler and Freddie Gillespie are, they’re not turning Baylor into an offensive-minded squad any time soon. To win games, Baylor has to do it with defense.

If the Longhorns can’t get it done over the remainder of February, Shaka Smart can expect to have a new address by the end of April. The situation has become relatively dire in Austin with the Longhorns looking like they’re going to miss the tournament for the third time in Smart’s five seasons at Texas. Nobody expected Texas to be in the Final Four like Smart managed at Virginia Commonwealth. Still, the expectations were to at least get Texas out of the first round of the NCAA tournament and in the top half of the Big 12 by now. Instead, Longhorns fans have had to watch as first Texas Tech, and now Baylor has passed Texas and left it in the dust. While the Longhorns have languished in the lower half of the Big 12, the Red Raiders reached the NCAA title game last year, and the Bears hold the No. 1 ranking in the nation this season.

None of that is good for Smart or his team, which has never managed to do well in the second half of the Big 12. Part of that is because of his stubborn refusal to play the up-tempo style that served him so well at VCU, and part is because the Longhorns just can’t put two halves together. Against Kansas and Texas Tech, Texas held a halftime lead, only to watch their opponent storm back and win the game in the second half. A team that folds in the second half is a team that’s going to end up in the NIT, and that would likely sink Smart for good in Austin.

Pressure. Both teams face massive amounts of pressure for different reasons. Baylor faces immense pressure as the No. 1 team in the nation, as every team they play is going to be gunning for the Bears. Texas has a lot of pressure just to get in the tournament, which is looking less likely by the day. The Longhorns are only 14-9 and really don’t have much left in the way of quality wins. They’ll play West Virginia at home, which is an excellent chance for a signature win, but otherwise, the only chance they have for good road wins is the end of February, when they’ll play Texas Tech and Oklahoma. With so few opportunities left, Texas has to get this win to make the tournament.

The Bears can pound the ball inside on the glass. Baylor dominated the rebounding battle in the first meeting, and Texas is not a strong rebounding squad. If Gillespie is able to do anything he wants in the paint, he’s going to be unstoppable in this contest. The Bears have to beat the Longhorns with the second shot and the third in order to win their way.

The Longhorns can shoot it better. Baylor was there to be beaten in Waco, but Texas could only shoot 18.8 percent from beyond the arc, allowing the Bears to build a comfortable lead and leave the Longhorns playing from far behind. Texas has to manage to hit its shots in order to keep the Bears from going on a run.

When I think of this matchup, I get flashbacks to watching Baylor play at the Hilton Coliseum against Iowa State. All night long, the Bears did whatever they wanted on the interior because they knew that there was nothing the Cyclones could do to stop him. They extended possessions, got easy layups and putbacks, and generally rolled to an easy win.

Texas can’t rebound the ball well either, and I think this game could be a repeat of what happened the first time these teams met. Baylor pounded the Horns on the glass, and this could be the same situation in Austin. Give me Baylor to pull out the cover. Where are you wagering on college hoops? Does your bookie give you -105 reduced odds, 20 point teasers, 25 team parlays, high paying pleaser bets or parlays where some of your picks can lose but you still get paid? (progressive parlays) NO, he doesn’t! Dump your betting outlet today and start having a better and cheaper experience at BetAnySports! You’ll be so glad you did!