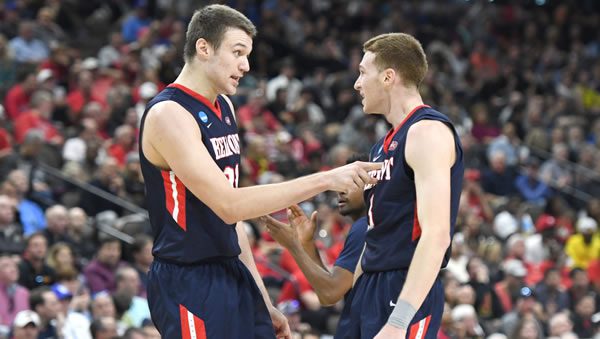 Barring a major upset in the Ohio Valley Conference tournament, one of these teams will be heading to the NCAA tournament. The question is, will the other one also get there? Belmont and Murray State have stood head and shoulders over most of the OVC (Morehead State would be a league leader in most one-bid leagues, but that’s the only other team in the league with a winning record) and have put themselves in position to both reach the NCAA tournament, as they did in 2019.

In order to make that happen, Belmont probably needs to either win the OVC tournament over Murray State or win here, win the season finale and then lose the final to the Racers. Both teams face a land mine in their final regular season game, so this is basically a last chance to make the case to the selection committee. If Murray State wins this game, the Racers are probably in the field as long as they don’t take a bad loss. The OVC protects its best teams by giving both the No. 1 and No. 2 seeds automatic byes to the semfinals, so there aren’t many opportunities to take a bad loss at this point. This could very well be a clinching game for one of these teams.

There was a time when betting Belmont was basically an automatic cover, but the secret’s out on the Bruins and the pushback has come in the opposite direction. Belmont has won 10 straight games since losing to Morehead State on Jan. 20, but the Bruins have failed to cover in six straight games, as they’ve spent most of February feasting on awful teams.

To cover this one and get a critical win, the Bruins have to make sure to take good shots, which means getting the ball inside the arc and hitting what the Murray State defense gives them. Belmont doesn’t have a single player who shoots under 40 percent from the floor, and leading scorers Nick Muszynski and Ben Sheppard both shoot over 50 percent and average 16.4 and 16.3 points per game respectively.

The other thing that Belmont has to do is force some mistakes. Belmont averages more than nine steals per game, but the Racers only turned it over eight times for the entire game in the first meeting between the squads. If the Bruins can’t create turnovers, their shooting will not matter.

Guard play was where Murray State crushed Belmont in the first meeting, as Justice Hill went for 36 points, Tevin Brown added 18 and the two players shot 12-for-18 from behind the arc. That’s why the line is only three points for this game: the public isn’t buying that Murray State can do that again this time.

The numbers seem to back that up, as Murray State only ranks 119th in the nation in 3-point field goal percentage. But like Belmont, Murray State tends to hit its shots when it gets inside, shooting almost 48 percent for the season and regularly cleaning up on the boards when it does miss. Had the Racers been able to hit free throws instead of hitting 56% of their shots from the line in the first meeting, they might have won by even more than the 22 points they did dominate Belmont by locking down on defense. The Racers don’t give up a lot of good looks, and their three-headed attack of KJ Williams, Brown and Hill has proven a combination that few, if any, teams can actually match.

Belmont will Cover If: The Bruins can force some mistakes and win the turnover battle. Murray State’s eight turnovers was much better than the 13 miscues Belmont had, part of why the Bruins were never really in the first meeting. Belmont averages nine steals per game, giving them a real opportunity to take control of the game if they can force a few mistakes.

Murray State will Cover If: The Racers can keep finding open shots in the opening 10 minutes of the first half. Murray State needs to feed off the crowd and not let its depth come into play, as the Racers don’t use enough bodies to avoid getting worn down themselves. The early going will be critical in either digging a hole or establishing that this game will be different than the first meeting.

Murray State isn’t likely to shoot anywhere near the percentage that it did in Nashville. The Racers have been strong on offense, but there’s a difference between hitting a few good shots here and there and hitting 67% of your shots from behind the arc. The Racers’ team total of 74.5 points seems a shade high against a team that can actually slow them down.

Belmont should be better than it was in the first game, but the Bruins still look like they’ve got a mountain to climb to actually best Murray State. The Bruins don’t hit enough deep shots to take control of a game, and the Racers need this game just as much as they do.

I think this is a game where Murray rides the crowd to a key victory. Give me the Racers here. Bet your Belmont vs. Murray State pick and ALL of your college basketball bets for FREE this week by taking advantage of a 100% REAL CASH bonus on your first deposit of $100 to $1000 at Betnow Sportsbook!