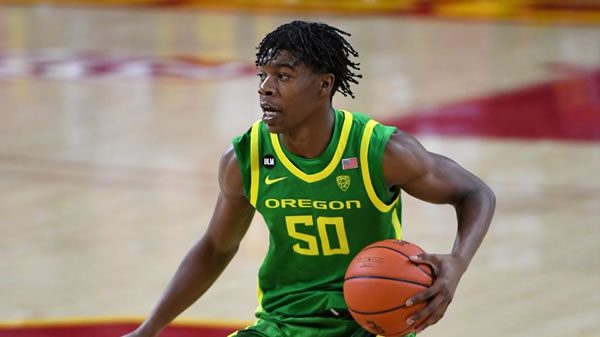 After grinding out a pair of games against San Diego State and Cleveland State, BYU is likely going to be thrilled to get to move a little faster against Oregon. The Ducks aren’t a default high-tempo team by any means, but they can play fast when the situation warrants it, and they’re likely to try to speed this game up a little and try to take advantage of their stronger shooting numbers.

Then again, BYU’s shot numbers are a bit underwhelming in part because they played defense-heavy San Diego State and had to win a game while shooting just 38.6 percent from the floor. The Cougars got excellent guard play in outlasting the Aztecs, but the performance of their post players left a little to be desired. That’s got to change against the Ducks, as Oregon has both the guards to match BYU and a strong post in Eric Williams Jr. ready to take over the game should the opportunity present itself.

The defense has been the calling card for the Cougars this season because BYU isn’t winning any prizes for its 3-point shooting to this point in the young season. The Cougars shot just 24% from the perimeter in their first two games, and while part of that can be explained by the opposition, that doesn’t tell the entire story.

Alex Barcello and Tejon Lucas were able to hit from deep, but the rest of the Cougars were 0-for-10 from beyond the arc and weren’t a whole lot better from the interior, as the Cougar post starters were a combined 7-for-19 from the field as a whole. Truth be told, BYU would probably be better off keeping Foussenyi Traore on the court a fair amount, as the reserve forward grabbed five offensive rebounds and ended up with nine points, more than any of the Cougar interior starters. If the starters struggle again, Traore might have to be called on to play Williams.

Depth is not the Ducks’ friend, but it hasn’t needed to be so far with Williams doing the job inside and Jacob Young and Will Richardson shooting the ball well to this point. All three players scored in double figures in a rout of SMU, and they figure to be keys to this game as well.

The big question is how well Oregon will shoot against the BYU defense. The Cougars have been locking down on their opponents to this point, and Oregon isn’t likely to shoot 45 percent from behind the arc against this opponent. The keys for the Ducks will be taking good shots when they come available and controlling the glass. No one player is responsible for rebounding for Oregon; the Ducks share the responsibilities evenly. Against SMU, the seven players who played the most minutes all grabbed anywhere from three to seven rebounds. Whether it’s a team effort or someone does step up, Oregon will need to win the rebounding battle to win this game.

The Cougars can continue to defend the arc as well as they did against San Diego State. BYU isn’t winning this game if Oregon gets hot from the perimeter, as the Cougars don’t have the shooters to match up with the Ducks. They’ve got to play tight defense again and keep the Ducks from hitting close to half their deep opportunities.

The Ducks can control the interior. BYU’s post play hasn’t been impressive to this point in the season, so the Ducks could really do some damage inside if Williams can take control early. If Oregon is scoring inside, a lack of 3-point shooting won’t end up meaning much.

I can’t see BYU shooting it well enough to push this game over the number. Oregon plays pretty good defense itself, and the Ducks have held their first two opponents in the 60s. BYU has a better offense than either SMU or Texas Southern, but it still isn’t great on that side of the floor. The Ducks should be able to keep another team out of the 70s.

Don’t be fooled by the neutral site; this is a home game for Oregon playing in Portland. The Ducks should have a sizeable crowd for this game, and the Cougars are likely to have a tough time shutting down all of Oregon’s weapons.

I think the Ducks have enough to cover this line. Did you know… You could be betting on basketball/football games at -105 odds instead of the more expensive -110 option that your bookie is sapping you with? Imagine how much money you’d save over the course of a year! HUNDRES if not THOUSANDS! Be smart! Make the switch today to BetAnySports!