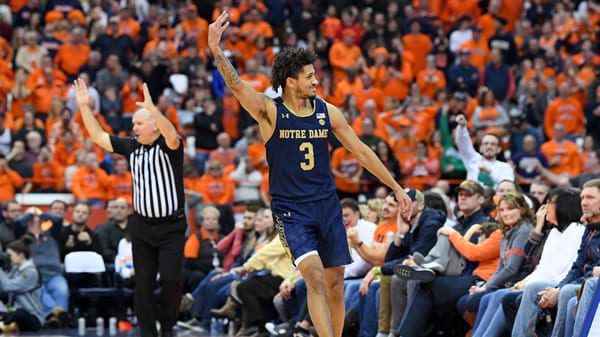 The schedule from hell continues for Notre Dame, with the Irish facing their fourth power conference opponent in five games in their ACC opener. Mike Brey decided to go all-in on making his schedule as difficult as possible this season, figuring that the Irish wouldn’t get to play all of those games anyway. So far, Notre Dame has actually acquitted itself fairly well. The Irish had to hang on against Kentucky but managed to pick up a nice win over a team with some solid raw talent.

Duke, on the other hand, is merely treading water at this point. The Blue Devils canceled the remainder of their non-conference schedule because Mike Krzyzewski didn’t feel it appropriate to play any games outside the ACC with the pandemic worsening, so the Blue Devils have been off for more than a week since facing Illinois. So far, Duke has looked nothing like a ranked team, turning in less-than-stellar wins over Coppin State and Bellarmine while meekly going down to both Michigan State and Illinois. The Blue Devils haven’t been bad, but they haven’t played anywhere close to the level that Duke teams are expected to produce. With Jalen Johnson now down with a foot injury, can the Blue Devils find a way to turn things in the right direction?

Can a team really survive with only four main players? Notre Dame is trying to find out, as the Irish have shown almost a total lack of depth for the first four games in the season. Prentiss Hubb, Nate Laszewski, Dane Goodwin, and Cormac Ryan are averaging 36 minutes a game or more, and only two bench players have played anything resembling real minutes.

So far, it’s been Hubb and Laszewski doing the scoring for the Irish, which has proven a double-edged sword to this point in the season. On the one hand, it’s worked well at times as both players have been accurate shooters who can put up big numbers, but on the other, when the Irish run out of gas, things can go wrong in a hurry. Against Kentucky, Notre Dame had a 22-point lead at halftime and nearly found a way to blow it, in part because of its lack of depth.

Without Johnson on the floor, Duke’s rebounding takes a major hit. The Blue Devils did hold their own on the boards against Illinois, but playing without Johnson means that Duke’s got to do a much better job on the glass than it has to date. Matthew Hurt is the only real rebounder that the Blue Devils will have on the court, and as he’s also Duke’s top scorer, that puts a lot of pressure on his shoulders.

The one thing Duke was able to do against Illinois was cut back on the turnovers. Duke has really struggled with taking care of the ball this season, and the loss to the Illini was at least a step forward in that area. With only two real scorers on the court in Hurt and D.J. Steward, Duke isn’t in a position to put up a ton of points. The Blue Devils have only cracked the 80-point mark once this season, and that was because Coppin State plays a fast tempo with little defense. A lower-scoring game is likely to be the way Duke wants this with Johnson on the bench.

Mental rest. This will be the first game Duke has played since Krzyzewski canceled the rest of the non-conference schedule, and it remains to be seen whether his or Brey’s approach will be the right choice for their teams. Most likely, it appears Krzyzewski chose what was best for his players over what was best for his basketball team, as Duke is likely to still leave some mistakes unaddressed thanks to the lack of game action.

Time away from the game could actually provide some benefits, especially in a situation like this, but, likely, Duke hasn’t yet had enough time to fully take advantage of such a situation. However, the lack of a non-conference game on the horizon means that Duke’s job is entirely focused on Notre Dame, while the Irish have to go up against Purdue in three days.

The Blue Devils can find a third scorer. Duke has to find a way to offset the loss of Johnson, and that only happens if the Blue Devils find someone to step up and put some points on the board. If Duke tries to win this game with only two scorers to its name, it’s likely to be another loss for a team that needs to find some confidence.

The Irish make the Blue Devils beat themselves. Duke has shown that it will turn the ball over this season, and if Notre Dame can play solid defense, it’s likely that the Blue Devils get frustrated and start making mistakes in the heat of the moment. A few early turnovers would go a long way toward the Irish hopes of an upset.

I’m not at all high on Duke, but I’m very concerned about Notre Dame’s lack of depth, especially given what occurred in the second half of the Kentucky game. The Irish had the game well in hand and managed to nearly blow a huge second-half lead. This is not a team that knows how to handle a lead against a good team for 40 minutes, and even though Duke won’t have Johnson, I think the Irish struggle in this matchup and end up watching the Blue Devils come away with a hard-fought win. Give me Duke. Bet your Notre Dame/Duke pick FREE by taking advantage of a 100% REAL CASH bonus on your first deposit of $100 to $500 at GTBets Sportsbook!