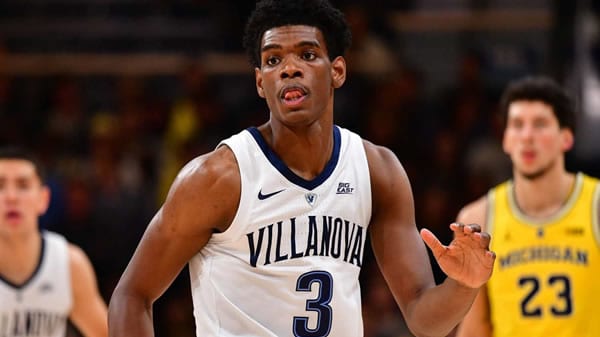 Wednesday is the season opener for both teams.

College basketball is back — for now. Villanova and Boston College was supposed to be the undercard on Wednesday before Baylor took on Arizona State, but Baylor coach Scott Drew got COVID, and the Bears pulled out of Bubbleville, so the Wildcats and Eagles take center stage. On paper, this looks to be a complete mismatch, as Villanova starts the year ranked third in the nation while Boston College went 13-19 last season and ended the year by losing six consecutive games.

However, anything can happen in a COVID bubble, and the Wildcats have been known to get caught napping in the early parts of the season. In previous seasons, Jay Wright’s club has been picked off by the likes of Furman and Pennsylvania, and that was with normal preparation time and a crowd in place. Can the Eagles soar in a bubble and start working on saving coach Jim Christian’s job, or will Villanova start its march toward trying for a third national title in five seasons?

Saddiq Bey is gone, but he’s about the only key contributor who won’t be back for a Villanova squad that really caught fire last season and established itself as a real threat to win another championship. The days of Villanova underachieving are long gone, and they’ve instead been replaced by a team that doesn’t beat itself by turning the ball over or missing free throws. Four Villanova starters shoot 71 percent or better from the free-throw line, and at 10.8 turnovers per game, the Wildcats ranked 17th in the nation in fewest giveaways last season.

The key for Villanova will be finding a replacement for Bey, and the most likely candidates are Cole Swider and Brandon Slater, both of whom were solid off the bench for last year’s team. But regardless of who steps in for Bey’s production, this is Collin Gillespie’s team now, and the Wildcats will go as far as their senior guard is able to take them.

There’s one bit of good news for Boston College: Jay Heath is back for his sophomore season. Beyond that, it looks like Christian should get his resume polished because the Eagles might be even more bereft of talent than they were a season ago. Derryck Thornton and Nik Popovic, last year’s No. 2 and No. 3 scorers for the Eagles, are both out of eligibility, and No. 4 option and third-best rebounder Jairus Hamilton now plays for Maryland. That leaves Heath and Steffon Mitchell as the only two players who did much of anything a year ago, placing a lot of pressure on their shoulders.

However, more pressure will be heaped upon Makai Ashton-Langford and Wynston Tabbs, who will both be expected to contribute from game one. Ashton-Langford is a transfer from Providence who projects to be the point guard the Eagles need, while Tabbs missed all of 2019-20 with an injury after averaging 14 points per game the year before. There’s potential for improvement, but the reality is the Eagles will be hard-pressed to stay in games with a lack of depth.

Bubbleville. How do the teams adjust to it? It could be argued that no players are better equipped to play games behind closed doors than college basketball players, given that these teams play preseason tournaments before virtually non-existent crowds in tropical locations every season. However, this will be a brand-new experience, as there won’t be any partying or excursions once the teams get to Connecticut. Whereas those tournaments are about a mix of fun and basketball, this one is strictly business. Who handles it best will likely have the most success.

The Wildcats can get an early lead and crush any thoughts that BC has of staying in the game. Villanova featured a top-10 offense and defense last season, and the Wildcats can easily knock the Eagles out of the game in the opening minutes if they get off to a hot start while BC is trying to figure out how to play together. Villanova has experience on its side, and it needs to make sure that it shows from the opening tip.

The Eagles can survive the first wave from the Wildcats. Boston College needed a much weaker opponent to open the year and build some confidence, but they’ve not got that. Instead, they’ve got a team that’s loaded with experience and can easily bury them in the first 10 minutes. Once Villanova gets some separation between itself and BC, the Eagles likely have no path back, so they’ve got to stay in the game for as long as possible. If they get down early, this likely gets ugly fast.

Dan’s Pick to Cover the Spread: This weekend looks like it could quickly be lost for BC, as they look rather unlikely to challenge Villanova and appear to be the weakest team in this four-team event. With little experience on their side, the Eagles’ only real hope appears to be if Villanova is looking ahead to Arizona State or is rusty and takes its time getting going.

I see little chance of either of those things happening. I think Villanova rolls here, and I’ll take the Wildcats to cover. Start the season off right by betting your college basketball picks for FREE for the first few weeks by scoring a massive 100% real cash bonus where you can deposit anywhere from $100 to $1000 and they’ll match your deposit dollar for dollar at BetNow Sportsbook!