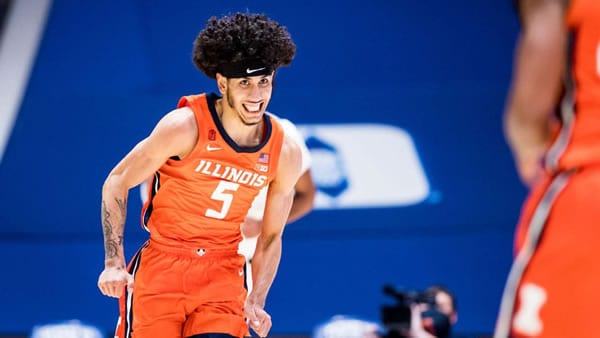 Illinois looks like a genuine threat to win the national title right now, while Ohio State is looking more like a threat to get picked off by a No. 14 seed in the first round. The Illini hit on absolute-ly all cylinders against Michigan and never let the Wolverines into the game, despite having to play without team leader Ayo Dosunmu. The Illini have been winning without Dosunmu for three games now, and they’ve won 10 of their past 11 contests, with the lone exception being the loss to Michigan State, where they lost Dosunmu.

The last team to beat the Illini before that stretch? Ohio State, which came to Champaign and left with an 87-81 victory. But Ohio State seems to have hit a wall in recent weeks, as the Buck-eyes are riding a three-game losing streak with two of those defeats at home. There’s certainly no shame in losing to Michigan, Iowa, or Michigan State on the road, but the Buckeyes’ defeats have been trending in the wrong direction. They lost a classic at home to Michigan, blew a lead to Michigan State, and then barely competed in a home loss to the Hawkeyes. A four-game slide would send the Buckeyes to Indianapolis needing to build momentum in a hurry before the NCAA tournament gets underway. Can Ohio State rediscover what it was in most of February?

I honestly wouldn’t be shocked if Brad Underwood holds Dosunmu out yet again and gives him more time to recover from what we now know is a concussion. First, Illinois really doesn’t need to win this game to get a top seed, as the committee will look favorably on a squad that picked up three good wins without a key part of their attack. Second, Illinois doesn’t have to be suc-cessful in the Big Ten tournament either, which means that it can be the time to integrate Dosunmu back into the offense.

For now, the Illini have their plan to win without Dosunmu, and it’s proven an effective three-legged stool: control the interior with Kofi Cockburn, play tough defense to hold the opponent’s score down, and make whatever contributions they can get from their backcourt. The defense improving would make a world of difference compared to the game in Champaign, because defensive issues were what cost the Illini dearly the first time they played Ohio State. Allowing the Buckeyes to shoot 54 percent from the floor again would make it very difficult for Cockburn to make up the difference.

When you struggle to keep hold of the ball, you’re not going to get the shots that you need to win games, and the Buckeyes certainly didn’t against Iowa. Ohio State’s shooting wasn’t terri-ble, but the Buckeyes only took 51 shots in that game as a team, which meant everyone had to be on to have a chance.

That didn’t happen, as Duane Washington had more turnovers (four) than made baskets (three), and the bench contributed basically nothing (10 points for the entire game from six bench play-ers). The bigger concern for Ohio State was that the Buckeyes grabbed just two offensive re-bounds for the entire game against Iowa, as Luka Garza and Joe Wieskamp controlled the inte-rior. Kofi Cockburn presents even more matchup problems inside than Garza does, and in the first meeting, the Illini center got six offensive rebounds on his own. Unless the Buckeyes shoot as well as they did in Champaign, there’s no way Ohio State can win this game with a repeat performance on the glass.

Lay only -105 on totals and point spread bets at BAS Sportsbook!

The final No. 1 seed. If Illinois wins this game, the Illini will be a No. 1 seed for the fourth time in program history, as long as they don’t do something stupid in Indianapolis (read: lose to Northwestern or Nebraska). That would be huge for Brad Underwood’s team, because the Illini have never failed to reach the Elite Eight as a No. 1, and both of the program’s Final Four trips came as a top seed.

Ohio State has to win just to give itself a chance at the last No. 1 seed. Realistically, to jump to the No. 1 line, the Buckeyes would have to win this game and then make a run to at least the Big Ten tournament final, where they could afford a loss as long as it came against Michigan. Lose this game to Illinois, and the Buckeyes’ seeding gets precarious. Not only would they arrive in Indianapolis looking only to protect their No. 2, but they’d almost certainly open with a no-win landmine in either Minnesota or Northwestern, both of whom have nothing to lose and have already beaten the Buckeyes this year. Lose to either of those teams, and Ohio State is more likely to have to play a No. 1 seed in the Sweet 16 (if they get there) than it is to be a No. 1 itself.

Cockburn is able to take over the game. Illinois is probably not going to have Dosunmu on the floor and will again rely on help from Andre Curbelo, Adam Miller, and Trent Frazier. But the big man has to be at his best for the Illini to keep this momentum going because he’s the most important piece of the puzzle without Dosunmu on the floor. If he doesn’t play well, the strategy collapses.

The Buckeyes can rediscover the shooting touch. Ohio State is probably not going to shoot as well as it did in Champaign, but as long as the Buckeyes are hitting close to 50 percent, they can neutralize the huge advantage Illinois has under the basket. One thing’s for sure: if Cockburn is able to do whatever he wants under the basket, this will end badly for the Buckeyes.

The Illini are hot right now, and the Buckeyes are not playing as well as they were before the month began. Ohio State’s losses are all understandable, but a loss here would be every bit as understandable, and I don’t think the Buckeyes have the ability to keep Cockburn from taking over the game a second time.

Given the defensive improvement from the Illini and their recent evisceration of Michigan, I’m not picking against them here. Give me Illinois.