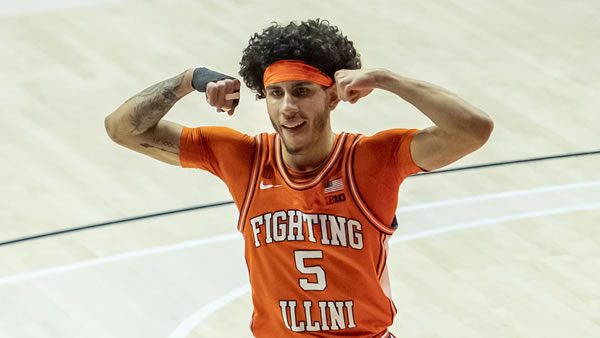 After one half of basketball, Indiana appeared to be dead and buried as far as the NCAA tournament goes, but the Hoosiers came up with their best half of the season when it mattered most. As such, they’re still here in Indianapolis and are now one win away from removing all doubt about the NCAA tournament.

But getting that win’s not going to be easy because it’s going to have to come against the league champion Fighting Illini. Illinois isn’t just the Big Ten regular-season champion; it’s also owned Indiana in recent years, winning the past four matchups against their eastern border rivals. The teams only met once this season, and Illinois clubbed Indiana by 17 points at Assembly Hall, a major surprise given how well Indiana has played at home this year.
The Illini know they’ll be in the NCAA tournament, but they’ve got something to play for too, one of the two subregional spots in Indianapolis. It’s long been assumed that those were going to Kentucky and Purdue, but if Illinois can win the Big Ten tournament, the Illini would have a strong case to steal one of those spots for themselves and play in front of a lot of their fans. Which team wants this one more?

When Trayce Jackson-Davis plays the way that he did in the second half against Michigan, there’s really only one player in the Big Ten who can handle him. Unfortunately for Indiana, that player happens to play for Illinois, and it’s Kofi Cockburn. In the loss to Illinois in Bloomington, Jackson-Davis was a non-factor, scoring just six points and hitting 3-for-9 from the field.

But against Michigan, he took over the game, scoring 24 points and grabbing eight rebounds to spark his team’s comeback. The big question is, do the Hoosiers have anything left for Illinois after surviving against Michigan? Indiana isn’t a particularly deep team, and they need to have Jackson-Davis ready to go and ready for a fight for 30 minutes with Cockburn. When a team uses up its energy trying to come from behind in the second half (hello, Northwestern), it’s often very difficult for them to come back the next day and try to play against a rested opponent. The teams that are in control of the previous game are usually the ones who pull an upset against a rested foe, and that’s not Indiana.

Illinois has been surviving, not thriving, as it’s come down the stretch. The Fighting Illini have won four of their past five games, but none of them were by more than eight points, with the wins over Iowa and Penn State coming down to the final possession. Illinois really hasn’t looked dominant since the trip to Bloomington, as it’s been taking every team’s best shot and looking a little fatigued from doing it.

The Illini haven’t played since Sunday, and the time off could make a real difference for a team that really seems to need a mental breather. This is a situation where Illinois will want to take control early if at all possible because they’re now facing a tired team that has nothing to lose. The longer Indiana stays in the game, the more it will believe it should win.

Indiana will Cover If: The Hoosiers can keep Cockburn from dominating the interior. Jackson-Davis has to play a good game to give his team a chance to win this one because if Cockburn dominates the game, it’s hard to see Indiana pulling this out. The Hoosiers need their star to be a star.

Illinois will Cover If: The Fighting Illini can put the game away early. In the second game of the Big Ten tournament on Thursday, Iowa showed how to do it by hitting the gas against Northwestern and blowing the Wildcats’ doors off. Illinois has to get off to a similarly hot start.

Illinois rarely has problems scoring on Indiana. The Fighting Illini have met or exceeded 69 points in six of their past nine matchups with the Hoosiers, including the past three meetings. Expect Illinois to get into the 70s again and go over its team total of 69.5.

If the spread were higher, I’d lean Indiana. But Illinois is only giving 3.5 points here, so this is a situation in which the favorite should be able to handle things. I might try to get under that hook and take a small amount of juice on Illinois -3, but I like the Fighting Illini here either way.