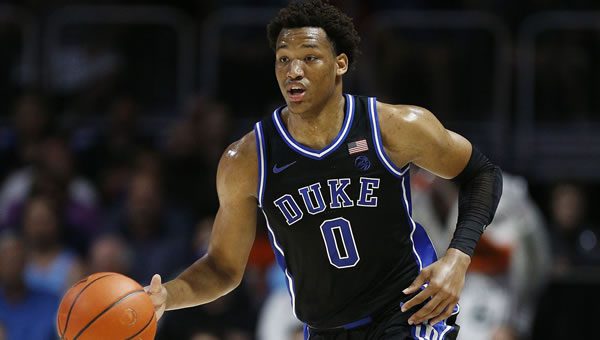 After taking down No. 2 earlier in the week in this same building, Gonzaga tries to add another Top 5 team to its list of victims, as the Bulldogs welcome Duke to the desert. This is Gonzaga’s third consecutive game at T-Mobile Arena (one more and the Bulldogs would officially be unable to play there were it hosting the NCAA tournament this year), so it’s almost a home game for the Bulldogs at this point.

Regardless of where the game is played, Duke comes into this game in a rare position: as an underdog with nothing to lose. The Blue Devils missed the NCAA tournament last year for the first time since the lost season of 1995, and while they’ve reloaded with a group of heralded freshmen as they usually do ever since Mike Krzyzewski embraced the one-and-done model, they’ve yet to prove that they’re really as good as their ranking suggests. Duke is probably going to be back to being Duke this year, but the reality is that they’ve beaten five mid-majors and a Kentucky squad that also failed to reach the tournament last year. Beating Gonzaga — heck, even covering the spread, given what the Bulldogs did to UCLA — would be a major sign that the Blue Devils intend to make Krzyzewski’s final season one to remember.

If Paolo Banchero wanted a challenge to prove that he’s the No. 1 draft pick in next year’s NBA draft, he’s got it. The Duke freshman has been one of the top options listed for the top overall pick for next season, and so far, he’s looked worthy of the hype. The Blue Devils are scoring almost 86 points per game, and a large part of that is having Banchero inside to attack the rim.

Beyond Banchero, Duke rebounds incredibly well, as the Blue Devils can also count on Wendell Moore and Mark Williams to bang around inside. This is a team that’s a lot more size-heavy than recent Blue Devil squads have been, and Duke can bang around with anyone this season. But the big question for the Blue Devils is whether they can shoot their way out of a tough spot this year. Duke doesn’t have a true 3-point shooter on this year’s team, as the Blue Devils only shoot 33.6 percent as a team from deep. With their top six scorers all at 33.3 percent or worse, this is a team that relies on inside play and mid-range jumpers.

If it’s not Banchero picked first, it might be Chet Holmgren. Pairing Holmgren with Drew Timme is almost unfair, as the two are a matchup nightmare for just about anyone in the interior. Timme is more of a pure power forward who rarely ventures far from the lane, while Holmgren operates more like Banchero, making him a lot closer to the modern interpretation of the NBA center that makes him so prized.

If Gonzaga has a weakness, it’s probably either depth or 3-point shooting. The Bulldogs didn’t go deep into their bench against UCLA despite putting the Bruins away in the first half, and if a team is able to hang with the Bulldogs from start to finish, there’s a chance that Gonzaga could wear down in the final few minutes. But so far, we haven’t seen any evidence that anyone can hang with Gonzaga for 40 minutes.

The Blue Devils can hold their own on the interior and hit some shots. Gonzaga has the rebounding edge because Timme is a better interior player than anyone Duke has besides Banchero, but if Duke can hold its own and prevent easy baskets on the offensive glass, this can be a tight battle. If the Bulldogs can attack inside at their leisure again, this won’t go any better than UCLA.

The Bulldogs can own the perimeter as well the interior. Gonzaga is likely to dominate the paint because of Timme and Holmgren, but the Bulldogs also have the ability to hit some deep shots where Duke really hasn’t shown much success on the perimeter and isn’t defending the three very well. If Gonzaga can hit from deep, Duke doesn’t have much of a chance.

These teams tend to play fast and will likely score a lot of points in the process. The last time they squared off, they hit 177 points, and while that might be a little much this time, it’s still likely to top the over by a pretty good margin.

Duke has shown that it’s better than last year by beating Kentucky, but the past five games haven’t really been enough of a preparation to face the likes of Gonzaga. The Bulldogs are one of the toughest matchups for any team, and I can’t see Duke hanging with them for 40 minutes.

Give me Gonzaga. Don’t forget to check out my Week 13 college football picks!