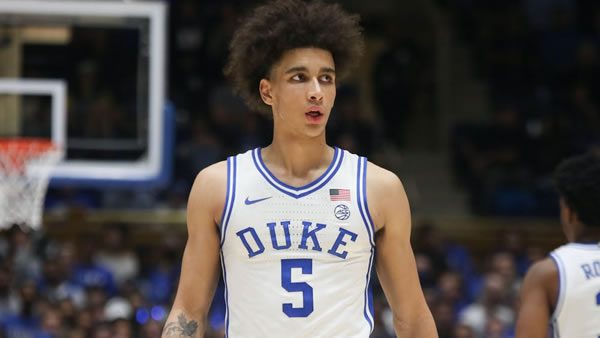 The Blue Devils will
look to extend their four-game winning streak when they travel to Lawrence Joel Veterans Memorial
Coliseum in Salem to take on the Demon Deacons. The visitor opened as a -7 favorite and has
climbed to -8 or more at most sportsbooks. Likewise, for the total line that hit the boards at
141 and has ticked up a half point to 141.5

Duke is coming off an 82-55 win over Maryland Eastern Shore. However, they did not cover the
spread in the game as -31.5 point favorites. The combined 137 points finished above the 136 total
line.

Wake Forest most recently fell to Rutgers (81-57). Not only did the Demon Deacons lose
straight-up, but they picked up an ATS defeat as +9.5 point underdogs. The combined 138 points
finished above the 133.5 total line.

Over their last five games, Duke has a straight-up record of 4-1 while going 2-3 vs. the spread.
Over this stretch, the Blue Devils’ offense is averaging 73.6 points per game while hitting 46.1%
of their shots from the field. On the defensive end of the floor, they have allowed opponents to
shoot 41.7% from the field while allowing 64.6 points per contest.

In their previous five contests, Wake Forest is 2-3 straight-up and 1-4 vs. the spread. In these
five games, they have a scoring average of 65.8 points per game on a shooting percentage of
44.0%. Defensively, they are allowing teams to hit 49.8% of their shots while giving up 74.2
points per game.

This season, the combined power rating of Duke’s opponents comes in at 86. On the other side,
Wake Forest’s combined opponent power rating sits at 163.

How Does Duke Fare On The Road?

For the season, the Blue Devils have played three road games and have a record of 2-1. In
these contests, Duke is 2-1 vs. the spread. Offensively, they have averaged 67.0 points per game
on a shooting percentage of 43.5%. On defense, the Blue Devils are allowing 67.0 points per
contest when playing away from home. So far, opposing teams have a field goal percentage of 41.0%
in these games.

How Does Wake Forest Fare At Home?

In their eight games at home, Wake Forest has a 4-4 record vs. the spread while going 7-1
straight-up. On offense, the Demon Deacons are shooting 47.6% on their home floor, leading to
79.2 points per game. Defensively, opponents are shooting 40.9% in these contests. The Wake
Forest defense is allowing 67.5 points per game at home.

For the season, Duke is averaging 80.2 points per game (13th) while posting an overall field
goal percentage of 48.9%. In today’s game, they will be matched up against a Wake Forest defense
that has allowed an average of 70.8 points per contest. This year, opponents have hit 43.6% of
their shots vs. Wake Forest. On the other side, the Wake Forest Demon Deacons are coming into the
game averaging 79.5 points per game on a shooting percentage of 48.8%. The Demon Deacons will be
facing a defensive unit allowing an average of 58.7 points per contest. So far, teams have hit
39.5% of their shots vs. the Blue Devils.

From beyond the arc, Duke has a shooting percentage of 36.8% while ranking 332nd in attempts
per game. The Blue Devils will be facing a Wake Forest defense that has a 3-point field goal
shooting percentage allowed of 33.2%. Wake Forest enters the game having hit 35.1% of their looks
from deep while averaging 8.62 made 3’s per game. On the other end, Duke has allowed opponents to
hit 27.1% of their shots from beyond the arc.

Sure, Wake has won all six of their home games this season, but
they haven’t beaten a team with an RPI lower than 125. They lost their only ACC game falling by
20 points as a three-point road dog. Duke is just 6-6 versus the line, but seven of their ten
wins had a margin of more than today’s spread, and they have a massive edge on defense. Rutgers
and Clemson were able to slow down Wake’s scoring, and I believe Duke will do the same and get
road win and the cover tonight. Want more picks? Check out what the Predictem Pros are playing tonight!