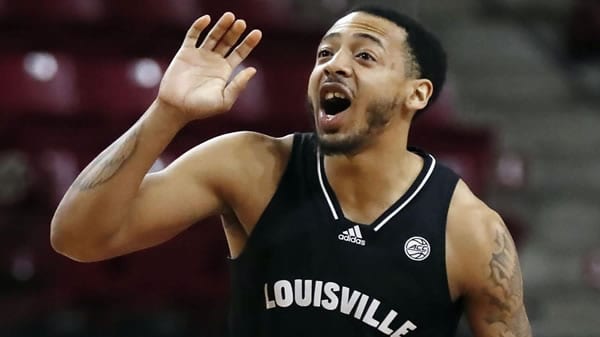 The ACC might be down this year, but it’s not because of either of these two squads, who find themselves right in the thick of the race for the ACC tournament’s top seed. Both teams are just one game back of leader Virginia, and both will have a shot at the Cavaliers on their home court later in the season, giving them ample opportunity to take control of the conference race.

But before they can worry about it, they’ve got their only shot at each other this season. Florida State comes in off a pair of solid victories over N.C. State and North Carolina, but the Seminoles have played only one game outside of Tallahassee this season and lost it by double digits to Clemson. Conversely, Louisville is back home after a two-game swing through the Southeast that saw it handle Georgia Tech while falling at Miami. The Cardinals haven’t made it easy on themselves when they’ve hosted a Power 6 opponent on the banks of the Ohio River, but they have always emerged victorious, beating Seton Hall, Kentucky, and Virginia Tech by a combined six points. Can they pull out another tight one and muscle past Florida State into second place?

Vintage Florida State this isn’t, as the Seminoles actually have a better offense than defense to this point in the season. Traditionally, Leonard Hamilton’s teams have played a slower tempo and emphasized defense, making them a solid under bet in most years. But the Seminoles are 5-1-1 to the over in their past seven games, as only Gardner-Webb couldn’t push Florida State above the number.

Part of that is because the Seminoles simply have an excellent offense, as one of those overs came against Clemson and its rock-solid defense. But part is because Florida State’s defense just isn’t as strong as usual, as the Seminoles have given up nearly 70 points a game. M.J. Walker has proven to be an outstanding senior leader for the Florida State offense, but he’s the only one that the Seminoles can consistently count on to score, as nobody else plays more than 28 minutes a game. Last season, Walker stole the show in this building, scoring 23 points in a 78-65 win over the Cardinals.

While Florida State’s defense has been questionable, Louisville’s has been quite successful in ACC play. However, there’s a real concern about whether the Cardinals are simply taking advantage of a soft schedule, as they’ve had the good fortune to face Wake Forest and Boston College, neither of whom will ever be confused with a great offense. Miami was able to shoot 49 percent against Louisville, which raised a lot of questions about whether the Cardinals’ defense is as good as it’s looked in the first few conference games.

What’s clear with Louisville is that everything they do goes through Carlik Jones. A year ago, Jones was the leader on a good Radford team that would have made the NIT had it been held. This year, he’s taken over the Cardinals’ offense, as just under 50 percent of Louisville’s points have either been scored or assisted by Jones. Jones’ importance to the Cardinals was never more evident than on their trip to Wisconsin when Louisville had to play without him and ended up on the wrong end of a 37-point loss.

Depth. The Seminoles have it, and the Cardinals do not. That’s one reason that Louisville plays as slow as it does this season; the Cardinals absolutely have to keep Jones on the floor. Against Miami, Jones played all 40 minutes because Louisville doesn’t really have anyone else it can count on to put up points besides David Johnson.

Florida State, on the other hand, knows it can count on its depth behind Walker but might take some time to figure out which scorers are going to get the job done. The Seminoles usually hit their stride in the final eight minutes of the first half, and Louisville has to weather the storm if it’s going to get the win here.

The Seminoles can keep Louisville from getting off to a hot start. Like most teams that love to wear their opponents down with their depth, Florida State takes some time to get going before it hits its stride. The problem is that it doesn’t always work against a team like Louisville, which can make it very difficult to come back if it gets an early edge and can dictate the tempo for the rest of the game. If Florida State can keep the game even through the first 10 minutes, it will have the edge.

Louisville will Cover If:

The Cardinals can win the game on the glass. Florida State is not a great rebounding team, something that Clemson took full advantage of when the Seminoles visited Littlejohn Coliseum. The Tigers grabbed 49 rebounds and 19 offensive rebounds in that game, which prevented the Seminoles from ever getting their offense in gear. Louisville plays a lot like Clemson, and the Cardinals can gain the edge if they can pound away at the Seminoles inside.

A deliberate, defensive-minded team on the road proved a bad matchup for Florida State the last time it had to leave Tallahassee, and I’m thinking this one might end up going the same way. Louisville plays a lot as Clemson does, and the Tigers were able to control the final 10 minutes with their style of play.

I think the Cardinals can do the same thing here, and I’ll take them to cover the small chalk and get the win at home. Bet your FSU/Louisville pick FREE by taking advantage of a 100% REAL CASH bonus offer on your first deposit of $100 to $300 at MyBookie Sportsbook!