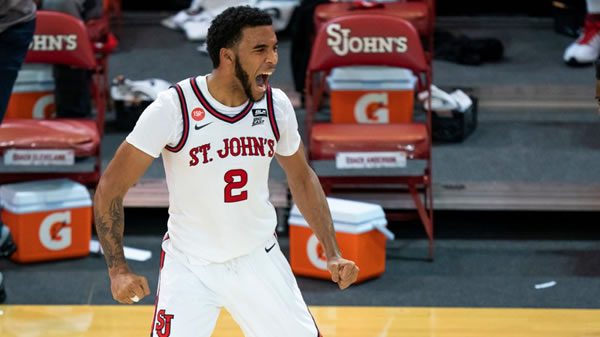 If you’ve had enough football for one weekend, there’s this option between two once-proud Big East sides that have fallen on hard times. Georgetown was actually an NCAA tournament team a year ago, but that was entirely because the Hoyas got hot at the right time, won four games in four days at the Big East tournament, and ended up stealing the automatic berth.
They quickly got waxed by Colorado and have returned to their ugly form since that magical weekend in New York, showing zero signs of improvement to this point. While the rest of the Big East has at least picked up a decent win or two somewhere along the way, the Hoyas look like a problem that Patrick Ewing cannot fix.

St. John’s isn’t in a much better situation at the moment, although it’s definitely a little bit better, as the Red Storm have actually been mostly competent at home. St. John’s has won six of its past seven games in the Garden (a loss to Kansas was played to open up the Islanders’ arena on Long Island) and played at least credibly in losses to Connecticut and Providence. The Red Storm has struggled to cover as of late, but so has Georgetown, which has lost three straight and lost two by double digits. If St. John’s wants any hope of making it to the NCAA tournament without an auto-bid, losing here isn’t an option.

In Ewing’s day, the Hoyas were well known for their defense and how tough they could make life for opponents for 40 minutes. These days, you likely get 20 minutes tops out of the Georgetown defense, which tends to let down in a big way over the second half of the contest. The Hoyas rank 303rd in giving up points this season, and they’ve often found themselves out of the game before they even get to halftime.

Ewing has chastised his players for repeatedly for showing up flat for games. However, the simple reality is that Georgetown is still overmatched and undertalented, and the results of the mistakes Ewing has made in recruiting has contributed to what the Hoyas have on the floor now. Aminu Mohammed is a decent scorer, but shooting 38 percent isn’t going to get it done against a good offense. If Georgetown doesn’t get more from him and the rest of the guards, the job falls to Collin Holloway to clean things up — which hasn’t exactly gone according to plan this season. Holloway is not a great rebounder, but he is about all Georgetown has in the interior.

Few teams are as dependent on two players as St. John’s, which bets pretty much everything on Julian Champagnie and Posh Alexander. The two combine to average 36.6 points per game, almost half of the Red Storm’s total each night, and they’re both dependable rebounders, with Alexander serving to feed Champagnie fairly often.

The thing St. John’s has to do better is to make sure that it’s taking good shots inside the perimeter. Champagnie and Dylan Addae-Wusu are the only reliable 3-point options the Red Storm has, as Alexander doesn’t hit from outside, and the rest of the team can’t get above the average of 36 percent. St. John’s shoots very well from inside the arc, but one out of every three shots the Red Storm takes is from deep.

Georgetown will Cover If: The Hoyas can play some defense and get someone to hit their shots. St. John’s will get its points from Champagnie and Alexander, but that’s OK as long as someone hits shots for Georgetown. If the Hoyas aren’t hitting, this will get ugly quickly.

St. John’s will Cover If: The Red Storm don’t try to do too much too early. Georgetown is the type of team that you can knock out in the early going if you keep them from getting rolling. St. John’s has to take what’s available and build an early lead

These teams play ridiculously fast and don’t play much defense, so there’s likely to be plenty of points scored. 161 is a lot of points, but it’s very possible if both teams do their share of scoring. Georgetown should do enough to get the number there.

It’s hard to give 10.5 with St. John’s against anyone, but I see no other option. The Hoyas are just a bad basketball team that appears to have checked out mentally already, while the Red Storm still has reason to play hard and try to get itself in the conversation for a postseason bid.
I doubt I bet this game, but if I need to make a pick, I’ll take St. John’s. Hey! Don’t forget to check out ouor Wildcard Weekend NFL picks!