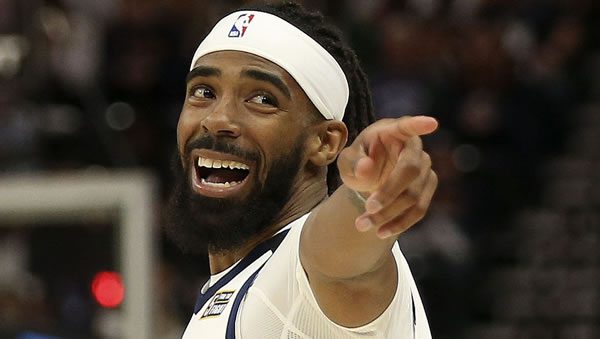 The Utah Jazz come into this game with a 28-14 record and sit 4th in the Western Conference. After an impressive streak to end the month of December, the Jazz are struggling at the midway point of this month as they are 2-5 in January. Though still the top offense in the league, they’ve fallen well short of their 115.1-point average, as they averaged 107 points over their four-game losing streak. Shooting just 40% from the field in their 111-91 loss to the Cavaliers last time out was the lowest-scoring performance so far this season. With the exception of the last game, Donovan Mitchell has been doing his part by consistently delivering 30-point games, but his supporting cast has struggled to help in their slump. Luckily for the Jazz, their last win a week and a half ago was against the Nuggets, who they face off with again tonight. The Jazz offense is led in scoring by Donovan Mitchell, who is averaging 25.7 PPG this season. Offensively, the Jazz is averaging a league-best 115.1 PPG. On defense, the Jazz has fallen down the ranks, now allowing 107.6 PPG, which is 12th best in the NBA.

The Denver Nuggets enter this game with a 22-19 record and sit 6th in the Western Conference. The Nuggets have put together a good stretch of basketball, thanks to being home for their last two games, and will continue their homestand for another four games. Denver’s last two games were arguably the two most complete games we’ve seen out of this team this season. Two games ago against the Trail Blazers, the Nuggets notched a season-high 140 points. In their last game, the Nuggets dropped 133 points on the Lakers while holding them to just 96 points. After a stint with a list of players on the injury and covid list, Denver is starting to get some players back on their bench. After expecting to be out the rest of the season after his back surgery, Michael Porter Jr. and Jamal Murray are on pace to be back by April. If the team is able to keep above a .500 record until their star guards return, the Nuggets could be a team to keep an eye on come postseason. Nikola Jokic leads the team in every category and averages a line of 25-14-7 this season. Despite their recent scoring surge, Denver still sits 23rd offensively as they average 107.1 PPG. Defensively they sit inside the top 10, with the 9th best scoring defense as they allow 105.5 PPG.

Utah on the Road

Despite a tough stretch recently on the road, the Utah Jazz still have an impressive 14-6 road record. Over their four-game losing streak, the Jazz were unable to cover the spread in any of the games, being favorites in three of them. Before their losing streak, when they were winning games, the Jazz was unable to cover in a lot of their wins as well as they have covered the spread as favorites in just two of their last thirteen games. The Jazz go into this game as favorites once again, and I think they couldn’t have had a better time to rematch the same opponent they downed less than two weeks ago. In that game on January 5th, the Jazz were underdogs and were able to steal the outright win by dropping 115 points on the stellar Denver defense. Coming into this game off three days’ rest and going 4-1 ATS coming off that same rest period this season, the Jazz are going to get back to their offensive dominance and get back on track against a Nuggets team playing back-to-back nights.

After what was a slow start at home for the Nuggets this season, this team has come alive lately by dominating on both ends of the court. With now an 11-7 home record, the Nuggets are winners of three straight home games and once again host a familiar foe. Though the Nuggets have played better basketball lately than the Jazz, the statistics don’t lie in this matchup. The Nuggets will be playing back-to-back nights once again and are 0-4 ATS in their last four games playing on zero days’ rest. Also, despite their admirable play at home, the Nuggets are also 0-4 ATS in their last four home games against teams with winning records. Being that the Jazz come in on considerably more rest, and the Nuggets last two games may have been flukes against two of the West’s worst defenses, I think the Utah offense will come alive once again and end their winning streak with a victory in Denver.

Sunday night’s game will be the third time these teams meet this season. The Jazz were victorious in both contests this season, including the 115-109 final just 11 days ago. Dating back to last season, Utah has won three straight and four of their last five games against the Nuggets.

How the Public is Betting the Jazz vs. Nuggets

67% are betting the Jazz against the spread.
63% are wagering on the game to go over the posted total of 223.

This Western Conference features two teams in the Top 6 of the conference, though both come in on different stretches of basketball. The Jazz comes in riding a four-game skid due to some cold shooting performances. The Nuggets are winners of two straight, and though they may come in with confidence, the team they face once again has had their number over the last two years. As I mentioned above, this matchup couldn’t have come at a better time for the Jazz to snap their losing streak. Playing against a team that is a top 10 defense not only will prove that the last few games were a fluke but also show that the Denver offense can’t deliver high-scoring performances on a consistent basis. Take the Utah Jazz to cover the 4.5-point spread.