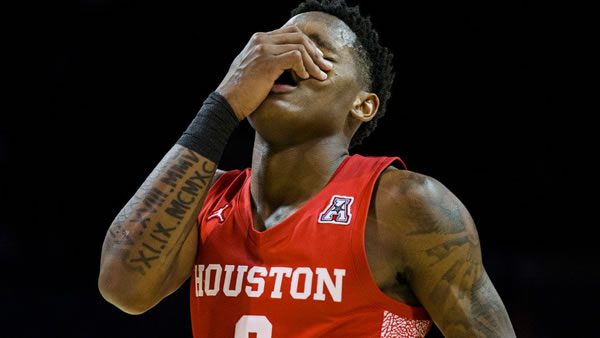 Now, what does Alabama do for an encore after taking down a top 5 team? Last week, Alabama became the first school in history to beat a top 5 team in both football and basketball in the same week when the Tide beat top-ranked Georgia in football hours before the basketball version went to Seattle and stunned last year’s national runner-up in Gonzaga. This is a team that asserts its will on opponents by running them to death, and it appears nothing has changed in Tuscaloosa.
Whether they can keep doing that depends on how they handle their opponents for this game, as Houston is not a running team but will lock down on defense. The Cougars have become the strongest non-major not named Gonzaga under Kelvin Sampson, a distinction they will shed soon when they officially join the Big 12. The Cougars have gone through a few weak opponents, but they’ve also shut down the likes of Oregon, Butler, and Virginia, holding each to 52 points or less. Those teams might have taken a step back this season (especially Virginia), but the fact remains that Houston has held all but Wisconsin and Hofstra to under 65 points in a game and doesn’t get forced out of its game plan easily.

Marcus Sasser is one of the rare players who can take over a game from anywhere on the floor, and he’s the one player that Houston has who won’t mind running with Alabama in the slightest. Sasser actually shoots better from 3 than he does from inside the perimeter, hitting 48.5 percent of his shots from the arc. He also averages 2.6 steals per game, which can quickly get Alabama out of sorts if the Tide are going at their usual breakneck pace.
What makes Houston so difficult to deal with is that all five guys on the floor for the Cougars can shoot, so they’re disciplined on defense and patient on offense. They figure that if you score, they’ll just match you at the other end. If you don’t score, they’ll respond with a bucket that forces you to sweat, leading to full-blown panic if you can’t stop the run coming.

Defending Alabama in basketball is a little like defending Alabama in football: how do you decide what to take away? There’s not really any one thing you can do to try to take away shots from a player when the entire team collectively takes 70 or more over the course of a game. The Crimson Tide love to score and score quickly, especially when they hit the deep ball, as well as they did against Gonzaga.

In that game, Jaden Shackleford went off for 28 points by shooting 6-for-8 from behind the line, and JD Davison came off the bench to hit four threes of his own. The rest of the starters weren’t that effective, but they didn’t need to be as long as they forced their opponent out of their game plan. Houston will be harder to get running against, but if it happens, it’s the Tide’s game.

Houston will Cover If: The Cougars can keep the shot totals where they want them. Having Marcus Sasser on the floor helps, but Houston is not going to win if Alabama is getting 70 shots off because eventually, enough shots will drop. The Cougars need to hold the Tide in the 50s or lower for shot attempts if they’re going to battle in this one.

Alabama will Cover If: The Tide can get hot from 3 early and force Houston to run to try to keep up. The Final Four loss to Baylor last year, which saw the Cougars down 25 at halftime, showed just what can happen if a team can force Houston to run. The results were not pretty, and Alabama needs to try to replicate Baylor’s game plan for this to work.

The 70s just seems to be too high for these teams in this game. Houston is the best defensive team Alabama has seen all year, and I think shots are going to be tough to come by for both teams. That favors Houston, and I like the total to avoid the number in this one.

Alabama is coming off a high of besting Gonzaga, but I’m not sure the Tide will be able to play the style they want in this one. Houston is a smart, well-drilled, and patient team that will not beat itself, and I’m not sure Alabama will be able to figure out the defense while going as fast as they want to go. I’ll take the Cougars for the cover here.