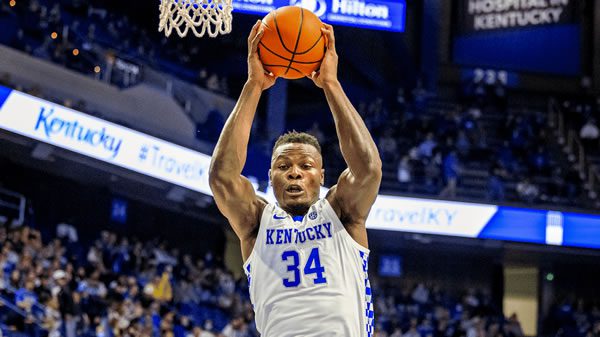 This was once a marquee matchup between real contenders, but it appears only one team is going to be contending for anything this season, as Notre Dame hasn’t beaten a Division I team since Nov. 16 against High Point. The Irish have just two wins all year against D-1 competition and were barely competitive in their ACC opener, falling by 16 and failing to put much of a scare at all into Boston College.

Kentucky comes in riding a seven-game winning streak against lower-level competition, but the Wildcats are winning with defense as opposed to gaudy offensive numbers. Southern’s 64 points was the most Kentucky had given up since opening the season with a 79-71 loss to Duke, and since that point, the Wildcats have consistently held opponents in the 50s or 60s. At the same time, the Wildcats’ wins have all come against teams who are not likely to still be playing in March. Notre Dame won’t last long in March either, but at least the Irish serve as a name opponent for the Wildcats before games with Ohio State and Louisville to really prove how far they’ve come.

Here’s the big surprise about Kentucky: The Wildcats do not shoot the ball particularly well from deep. TyTy Washington and Kellan Grady can hit the deep shot, but they don’t step out to the perimeter often enough to attempt those shots. But it hasn’t hurt them because the Wildcats have the nation’s leading rebounder in Oscar Tshiebwe, who is averaging almost 16 rebounds a game and is the largest reason why Kentucky leads the nation on the boards.

The Wildcats beat teams not with the first shot but with the second and third looks at the hoop, something they have virtually always done under John Calipari. Kentucky places a large emphasis on rebounding at all times, and with Tshiebwe in the lane, teams have a very hard time getting more than one shot per trip. Considering the 17 points and 11 rebounds Notre Dame just gave up to James Karnik, it’s looking like a good day for Tshiebwe.

It’s hard to find something that Notre Dame does do well this season because the Irish are only middling at shooting and rebounding and atrocious at defending the deep shot. Notre Dame ranks 357th in the nation in defending the 3, which would have been dead last without St. Thomas moving up to Division I this year.

The one thing the Irish have going for them is that they don’t really depend on any one player in particular, as they have had five different leading scorers in seven games this season. Notre Dame is at its best when Dane Goodwin and Blake Wesley are hitting outside shots, but that really hasn’t happened to this point in the season. Wesley can’t stay on the court, averaging just 21 minutes on the year. That seems to be a turnover issue, as Wesley had four against Boston College, and the Irish were never in the game.

Kentucky will Cover If: The Wildcats can keep dominating the glass. Washington and Grady should also be a little more aggressive in this game because they will get shots against a porous Notre Dame 3-point defense. If Kentucky starts hitting from the outside itself, Notre Dame really doesn’t stand a chance.

Notre Dame will Cover If: The Irish can keep the ball away from the paint. You have two choices when you play Kentucky: go hard at Tshiebwe and hope you can draw a foul or two from frustration, or stay away from him and hope that the ball bounces long enough that he’s out of position for a rebound. Notre Dame is probably best served choosing the latter, as it doesn’t have the depth needed to bang with Tshiebwe.

With Notre Dame not scoring much of late and Kentucky playing good defense, I think this is going to be an Under situation. The Wildcats have played to the under five times in their past six contests, and this one seems like it’s heading that way again. However, if you’re worried about a Wildcat explosion on offense, you could just take Notre Dame under 70.5 points, which is likely the right move anyway.

Kentucky should be fine in this one. Notre Dame is usually a challenge at home, but the Irish are just not playing well this season, and I don’t think playing at home will make much of a difference given the obvious flaws the Irish have. Give me the Wildcats.