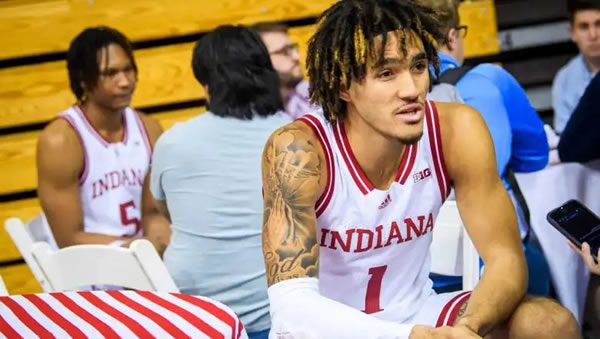 We have a Hot vs. Not taking to the floor of the Allen Fieldhouse in Lawrence, Kansas, on Saturday at noon. The college basketball board lists the Jayhawks as -5.5 home favorites, with the total offered up at 142.5

Indiana lost to Arizona in their last game by a score of 89-75. But because the Hoosiers were
+2.5 point underdogs, they finished with an ATS win. The combined 164 points finished above the
157.5 total line.

Kansas picked up a victory over Missouri by a score of 95-67. Heading into the game, the
Jayhawks were favored to win, with a point spread of -3.5. The combined 162 points finished above
the 155 total line.

Indiana
Over their last five games, Indiana has a straight-up record of 3-2 while going 3-2 vs. the
spread. Over this stretch, the Hoosiers offense averages 74.2 points per game while hitting 46.7%
of their shots from the field. On the defensive end of the floor, they have allowed opponents to
shoot 39.7% from the field while allowing 66.6 points per contest.

Kansas
In their previous five contests, Kansas is 4-1 straight-up and 3-2 vs. the spread. In these five
games, they have a scoring average of 78.4 points per game on a shooting percentage of 47.9%.
Defensively, they are allowing teams to hit 41.6% of their shots while giving up 63.8 points per
game.

This season, the combined power rating of Indiana’s opponents comes in at 160. On the other
side, Kansas’ combined opponent power rating sits at 106.

How Does Indiana Fare On The Road?

For the season, the Hoosiers have played three road games and have a record of 2-1. In these
contests, Indiana is 1-1 vs. the spread. Offensively, they have averaged 71.7 points per game on
a shooting percentage of 43.5%. On defense, the Hoosiers allow 66.0 points per contest when
playing away from home. So far, opposing teams have a field goal percentage of 37.6% in these
games.

In their seven games at home, Kansas has a 2-5 record vs. the spread while going 7-0
straight-up. On offense, the Jayhawks are shooting 49.0% on their home floor, leading to 82.9
points per game. Defensively, opponents are shooting 39.6% in these contests. The Kansas defense
is allowing 65.9 points per game at home.

For the season, Indiana is averaging 71.5 points per game (184th) while posting an overall
field goal percentage of 45.9%. In today’s game, they will be matched up against a Kansas defense
that has allowed an average of 65.6 points per contest. This year, opponents have hit 39.5% of
their shots vs. Kansas. On the other side, the Kansas Jayhawks are coming into the game averaging
78.6 points per game on a shooting percentage of 48.1%. The Jayhawks will be facing a defensive
unit allowing an average of 63.8 points per contest. So far, teams have hit 38.4% of their shots
vs. the Hoosiers.

From beyond the arc, Indiana has a shooting percentage of 33.9% while ranking 570th in
attempts per game. The Hoosiers will be facing a Kansas defense that has a 3-point field goal
shooting percentage allowed of 28.5%. Kansas enters the game having hit 35.5% of their looks from
deep while averaging 7.15 made 3’s per game. On the other end, Indiana has allowed opponents to
hit 29.8% of their shots from beyond the arc.

Pick Against The Number

My sources have Indiana freshman guard Jalen Hood-Schifino returning for this game, and with that, I believe the Hoosiers can give the Jayhawks all they can handle. Take Indiana +5.5.