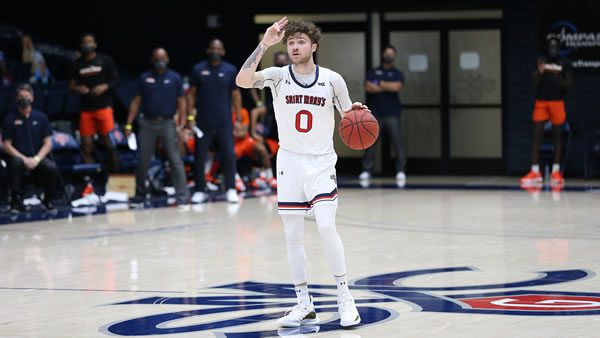 Indiana’s situation in this matchup is far from ideal, as the Hoosiers had travel problems coming to Portland from Dayton and arrived early on Wednesday morning. That’s hardly great preparation when going up against a Saint Mary’s squad that might be Randy Bennett’s best team of his time in Moraga.

However, the Hoosiers have a good matchup here if they’re able to exploit it by keeping up their momentum. Trayce Jackson-Davis picked up right where he left off from the Big Ten tournament in scoring 29 points to beat Wyoming, and Xavier Johnson continues to be effective at guard. But Saint Mary’s represents one of the strongest defensive tests the Hoosiers have faced, and the Gaels have a big-time player of their own in Tommy Kuhse, who almost never comes out of a game and had his own strong showing in the WCC tournament. With both teams wanting to win with defense, this could be a battle of stars.

The knock on Jackson-Davis going into Dayton was that he came up small in the Hoosiers’ most important games. That seems to be long over now after his performances in Indianapolis and Dayton. In the win over Wyoming, the center put the Hoosiers on his back and willed them over the line with a big performance, scoring nearly half of his team’s points.
The question is whether Indiana can sustain its play and whether dead legs come into the equation. The Hoosiers got less than 48 hours to recover from playing in Dayton and had to spend a good chunk of that time crossing three time zones before getting to their hotel. The good news for Indiana is they have two factors working in their favor: coach Mike Woodson came from the NBA and is used to long plane flights and short recovery times, and they play both a style and an opponent that allows them to conserve energy. Indiana will be more than happy to play this game at a crawl, which lends itself to an Under play.

Matthias Tass must be better if Saint Mary’s is going to advance because the Gaels are up against a legitimate post who can dominate the game if they aren’t careful. In the Gaels’ two most recent games against Gonzaga, Tass wasn’t much of a factor, grabbing a combined four rebounds in the contest and averaging 12.5 points per game. Those aren’t terrible numbers because Saint Mary’s doesn’t really need Tass to score a lot, but the Gaels do need more from him as far as rebounding.

Saint Mary’s cannot afford to get pushed around on the glass, something Gonzaga had the ability to do, and Indiana certainly does as well. The Gaels are at their best when they slow the game down, make you grind for a shot, and limit you to one look. If Indiana is able to pound away at the glass, the Gaels’ strategy collapses.

Indiana will Cover If: The Hoosiers can get their legs under them in the first 10 minutes and establish themselves. Indiana has to make sure that it’s on the same page and ready to play after the tough travel. If the Hoosiers get off to a slow start, they are likely to run out of gas toward the end of the game.

Saint Mary’s will Cover If: The Gaels can get Tass to rebound well and help Kuhse put up some numbers. This will not likely be a high-scoring contest, so a big performance on the score sheet is not necessary in this situation. But the Gaels must rebound and play defense to keep Indiana from dominating.

March Madness Picks: Akron vs. UCLA Prediction Against the Spread >>>

This is going to be a slower-paced game, and Indiana’s travel won’t do anything to change that fact. These are defensive teams who like games in the 60s or lower, and I think both will get what they want in this matchup.

I am worried about Indiana’s travel issues, but I think the Hoosiers can shake them off here. Indiana’s playing at a reasonable time and has had more than a full day to recover from the game against Wyoming. Plus, the Hoosiers do not play a fast style, and Saint Mary’s will not speed them up by any stretch of the imagination.
This is the wrong opponent to take advantage of a play-in situation. Give me Indiana.