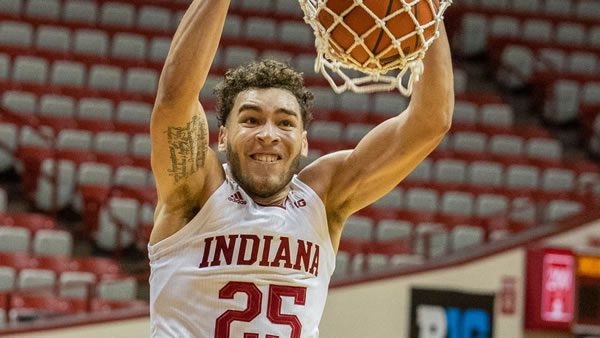 A pair of teams moving in different directions match up in Dayton, as Indiana was building momentum at the end while Wyoming kind of limped into the field. The Cowboys have the gaudy record, but considering they never actually beat any of the Mountain West’s good teams outside of Laramie, there’s a real question as to whether they’re actually a talented team or simply able to asphyxiate their opponents.

Indiana, on the other hand, came up big in the Big Ten tournament, getting the wins they needed over Michigan and Illinois to make the field as one of the last teams in. The Hoosiers thought they were a lot safer than where they ended up, and that could prove to be a motivator as Indiana makes the short trip over from Bloomington to the First Four. When Trayce Jackson-Davis plays like he did in Indianapolis, there isn’t much that teams can do about facing the Hoosiers. But too often, Indiana hasn’t done that away from Assembly Hall, which raises some of the same questions about the Hoosiers as exist with the Cowboys.

Indiana looks to be the stronger of the two teams based solely on the play of Jackson-Davis, who has taken his game to another level over the past week-plus. There’s a perception about the Hoosiers that Jackson-Davis tends to come up small in the big games, which isn’t entirely unfounded and is something that the center wants to change.

Having Xavier Johnson step up in recent weeks has made that possibility much easier. Lately, Johnson has made excellent decisions with the ball and helped it get where it needs to go, allowing the Hoosiers to dominate inside. Throw in some stern defense, and it’s little wonder why Indiana was able to take control of two games in the Big Ten tournament and nearly won a third. But the Hoosiers’ biggest problem has been a lack of sustainability, as for some reason Indiana has gotten disinterested too often and played a languid stretch of the game. That cannot happen here.

The Cowboys aren’t the easiest team to analyze because of how backloaded their schedule turned out to be. Wyoming finished the year just 4-5 and 0-3 on the road, but they also had to face San Diego State, Colorado State and Boise State in that stretch, all of which were tournament teams. This game will go a long way toward deciding if the Mountain West was really as good as it seemed, as all but two of Wyoming’s losses came in the league.

On paper, the Cowboys do have the size needed to battle Indiana, as Hunter Maldonado and Graham Ike give Wyoming quality play inside to make life difficult for Jackson-Davis. But the Cowboys don’t have much of anything in the way of depth, and they don’t have the shooters needed to keep up if the Hoosiers get going from outside. Wyoming had to use four players for longer than 30 minutes in the loss to Boise State, and foul trouble or fatigue can really wear them down.

Indiana will Cover If: The Hoosiers can get off to a good start and establish Jackson-Davis early. If he keeps going to the well, Wyoming isn’t going to be able to stop him and take control of this game. If he disappears again, the Hoosiers will be in big trouble here.

Wyoming will Cover If: The Cowboys can get their big men to score early and often without getting in foul trouble. Wyoming shoots a high percentage on close looks, but deep shots are not where they specialize. The Cowboys have to keep the ball down low.

Two defensive-minded teams that prefer twos to threes suggest a slower-paced game that doesn’t push past this total. As long as Indiana doesn’t get hot from the outside, this should slide under the number.

The Hoosiers have been facing better teams than Wyoming, playing better basketball than Wyoming and have to travel a lot less than Wyoming does. None of this situation adds up to anything positive for the Cowboys, who are likely lucky to be in the field. I think Jackson-Davis gets rolling and so do the Hoosiers. Give me Indiana.