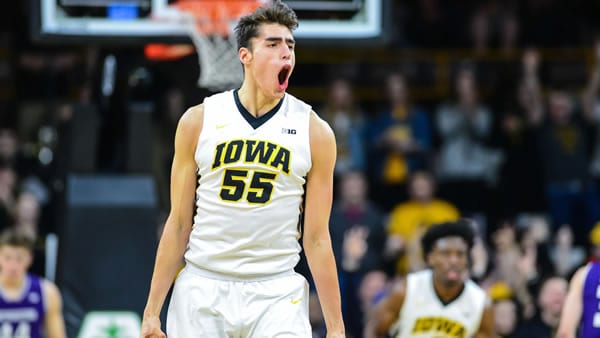 It’s a little too easy to call this offense vs. defense because Michigan actually plays offense with the best of them. Nor is this speed vs. deliberation, as Michigan’s tempo is actually right in the middle while Iowa plays at a moderately fast speed. All we can really say about this matchup is that it’s two strong teams that are likely to receive very high seeds in the NCAA tournament next month.

The other truth is that both of these teams come in with a lot of momentum, as Iowa has won four straight and Michigan has won five in a row. To be completely fair, two of those wins for Michigan date back to January because of a COVID pause, but the Wolverines have more than proven themselves by posting an 11-1 record in the Big Ten. Meanwhile, Iowa could really use a signature win to prove that it deserves a top-four seed. The best thing on Iowa’s profile is currently a win at Rutgers, which isn’t that impressive compared to other top teams. Beating Michigan at Michigan would change a lot of minds about Iowa.

At this point, there are no secrets regarding what Iowa’s going to do. The Hawkeyes are going to put up a lot of points and Luka Garza is going to score the lion’s share of those points. Garza is the most unique player in college basketball because nobody is able to guard him either down low or near the perimeter. Garza can pound away at the interior or go to the outside and start hitting, depending on how the game unfolds.

The biggest question is how well Iowa’s guards will play? Any of Joe Wieskamp, C.J. Fredrick, and Jordan Bohannon can go off for a big night, but it’s never a sure thing as to which one is going to produce on any given night. The points are always likely to come because Garza presents so much of a matchup nightmare that Iowa’s guards almost always get good shots, but hitting them is another story.

The thing that has to scare the Wolverines’ opponents: Michigan managed to win a game that evolved into a track meet when it went to Ohio State and pulled off a victory anyway, as the Wolverines made enough shots to stay ahead of the Buckeyes and avoid what could have been a costly loss.

The worry for the Wolverines is whether they can get their defense back to the way it was before the Ohio State game. Eli Brooks and Hunter Dickinson might have saved the day against the Buckeyes, but teams just don’t shoot 50 percent from deep against Michigan on most days. The Buckeyes are an excellent basketball team, but allowing a team to shoot that well is deeply concerning for the Wolverines.

Crisler Center. The Wolverines’ home arena has been a basketball fortress this season, even with no fans in the building, as Michigan has won 11 straight in Ann Arbor and seems to get even stronger playing at home, even with no fans to feed off.

Last year, Michigan beat Iowa at its own game, scoring 103 points to pick up a comfortable win at home. Iowa then evened the score with a 90-83 win when they got home to Iowa City, marking the first time the Hawkeyes had scored 90 points in consecutive games against Michigan since 1989. The Hawkeyes have lost two in a row in Ann Arbor, and thanks to the Big Ten’s unbalanced schedules, nobody on Iowa’s current roster has ever beaten the Wolverines in Crisler Center, as those are the only trips the current Hawkeyes have made to Michigan.

The Hawkeyes can take the Wolverines’ defense out of sync the way that Ohio State did. Iowa is pretty much all offense all the time, so the Hawkeyes really need to throw the opposing defense off its game, especially when that opposing defense is as good as Michigan usually is on that side of the ball. Getting a few quick shots would make a real difference.

The Wolverines can manage to have Dickinson fight Garza to a draw. Dickinson is a tall, talented freshman, but he’s also just a freshman facing off against a veteran collegiate center who knows all the tricks and is likely to produce a nightmarish situation whenever the Hawkeyes have the ball. Dickinson doesn’t need to win this battle; he just needs to keep Garza from taking over the game.

Michigan has been consistently strong all year, and the Wolverines have now covered in four of their fast five contests. That said, the under actually intrigues me more. Because the books have wised up to Iowa and given the Hawkeyes higher totals than they were at the start of the season, the under has now hit in five consecutive Iowa games and seven of the Hawkeyes’ past nine.

Taking the under against conventional wisdom paid off nicely in Arkansas’ win over Alabama, and I’m going to try it out again here. I’ll also pair it with Michigan eating the small chalk and coming out a winner. Question: Did you know that you could be laying only -105 instead of the -110 your bookie is socking you? This may not sound like much, but it’s a HUGE difference over time. It’ll save you hundreds (if not thousands) of dollars in risked amount that you could be using to bet more and win more! Find this beautiful money saving offer at BetAnySports!