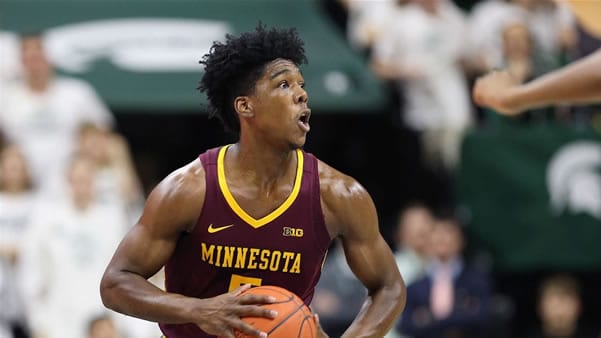 The books clearly expect scoring in this game, and little wonder, as Iowa still averages 95 points per game even after the Hawkeyes managed just 70 in a win over Purdue. Minnesota’s offense isn’t anywhere near as prolific as Iowa’s, but the Gophers have still managed to put up points against everyone not named Illinois.

However, the pressure is really on for the Gophers to prove they can compete in a loaded league, as Minnesota definitively failed its first Big Ten test of the season when it went to Illinois and played about ten good minutes before getting wholly squashed the rest of the way. The Gophers have had a fair amount of success against Iowa at home as of late, winning four of the past six meetings at Williams Arena. However, one of the exceptions came last season when the Hawkeyes overcame a cold shooting night with some tough defense. With Iowa coming off a defensive victory over Purdue, can the Hawkeyes slow the Gophers down enough to keep themselves in the top 5 nationally?

The win over Purdue wasn’t anything like what Iowa’s done this season, as the Hawkeyes were able to play the Boilermakers’ game and still win the game by 15. When Iowa gets to play its game, it’s an offensive juggernaut in large part because of Luka Garza, who has proven to be a matchup nightmare for everyone the Hawkeyes have come up against so far. Even in Iowa’s one loss of the season, Garza was unstoppable, going for 30 points.

But the key for Iowa has to be its guard play. Garza scoring is a given, but against Gonzaga, the Hawkeye guards only shot 18 percent from behind the arc, which directly contributed to the Hawkeyes falling 14 points behind in the first half and never catching up with the Bulldogs. Minnesota doesn’t present anywhere near the same matchup problems as Gonzaga, but the Gophers’ guards are good enough to keep themselves in the game if Iowa’s not hitting its shots. Jordan Bohannon’s got to shoot better than the 1-for-8 that he hit against Gonzaga in order for the Hawkeyes to take control.

Is Minnesota really that good, or have the Gophers simply been beating up on some weak teams? Minnesota has a glittering 7-1 record so far, but its best win was over Saint Louis, which might or might not be a contender in the Atlantic 10. What is clear is that Minnesota has to get production out of Marcus Carr and Both Gach if it’s going to do much of anything in the Big Ten. Against Illinois, Gach and Carr combined to shoot 3-for-22 from the field, which made the Gophers easy pickings for the Illini. There was another serious problem for Minnesota in that loss: center Liam Robbins. Robbins went up against a quality big man for the first time all season against the Illini, and the results left a lot to be desired. Robbins played just 16 minutes in the contest because of foul trouble, which meant that Kofi Cockburn was able to do anything he wanted in the paint. Robbins has to stay on the court in this game if Minnesota’s going to have a chance.

Liam Robbins. Not only is this a chance for him to redeem himself, but this is his first shot against his home state’s school. Robbins is from Davenport in eastern Iowa, just 50 miles from Iowa City. But the Hawkeyes showed no interest in him out of high school, and his path took him from Iowa to prep school to Drake and finally to Minnesota. Now he gets to go up against the Hawkeyes, and on top of that, he gets to face off with the heretofore unstoppable Garza. Above all, Robbins can’t let himself get beaten in the paint too often. He can lose the battle to Garza, and the Gophers can still win as long as he doesn’t lose it by too much. As long as Robbins can make Garza work, he’ll give the Gophers a chance to stay in the game if they can hit their shots.

The Gophers can stop Iowa from dominating the perimeter. Garza is going to score and score often, but if Bohannon and/or Joe Wieskamp doesn’t hit from the outside. The Gophers’ guards are good enough to win this battle if they can shoot better than they did at Illinois, and they’ve got to play quality defense and throw the Iowa guards off their game to have a chance.

I’m still not buying Minnesota as a real contender. The Gophers appear to have a nice win over Saint Louis, but that’s all they have going for them right now. Their guards didn’t appear ready to go against Illinois, and Iowa’s been facing off with much better opponents than Minnesota. Williams Arena is usually one of the most challenging places in college basketball to get a win, but without fans in the building, I don’t see the Barn intimidating the Hawkeyes this time. Give me, Iowa.