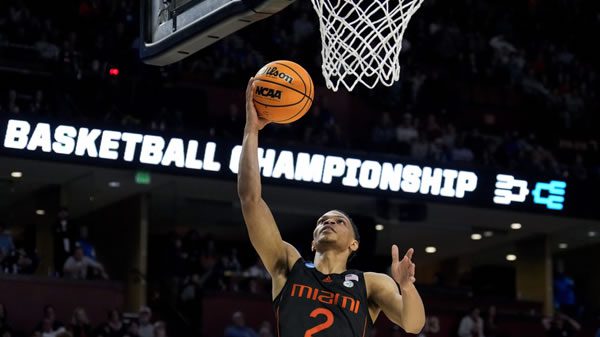 One double-digit seed is guaranteed to make it to the regional final, and it’s going to be the winner of this matchup. Miami’s guard-heavy offense proved too much for Auburn, while Iowa State overwhelmed Wisconsin with its defensive prowess, leading to a surprise matchup between two overlooked squads.

The question here is, which team will be able to assert its will on the game? Iowa State cannot shoot to save its life, which is why the Cyclones have had to win their games with defense so far. On the other hand, Miami hit the gas against Auburn and created 66 shot opportunities, hitting 48% and getting enough looks that it didn’t matter that the Hurricanes only hit three from beyond the arc. If Miami gets that many looks at the basket, it’s going to win. But Iowa State has gotten two opponents to play its game so far, and as it has shown, the Cyclones’ terms are tough to handle. Whichever team can dictate tempo should have the edge.

Iowa State has shot 36% in one round and 34% in another, and yet, the Cyclones are still here. Iowa State can barely hit Lake Michigan at 15 feet, but the Cyclones are still playing because the defense forces mistakes and forces opponents into bad looks at the hoop. Against Wisconsin, the Badgers went 2-for-22 from behind the arc and shot just 30% for the game while handing the Cyclones 16 free possessions based off of turnovers.

That’s the biggest question of this matchup: can Iowa State turn over Miami’s guards? The Hurricanes don’t turn the ball over often, giving it up just under ten times a game, but Wisconsin also took good care of the basketball and still finished with 16 turnovers. So far, Iowa State has forced 17.5 turnovers per game in this tournament, one of the biggest reasons why they’ve gotten as far as they have despite their shooting woes. If Miami beats the defense, this is going to end badly for the Cyclones. If not, Iowa State has a real chance.

When your guards play as well as Miami’s did against Auburn, the rebounding doesn’t really make a difference. The Hurricanes were all over the Tigers from the opening minute despite the size difference, and even though Auburn grabbed 14 offensive rebounds, the Tigers had just 21 baskets for the entire game.

That’s what Miami can do to opponents when everyone is on the same page because the Hurricanes are going to be the quickest team on the court and play that way. Miami forces even more turnovers than Iowa State does, but because it shoots the ball fairly well, it hasn’t had to rely on forcing opponents’ mistakes in this tournament. With Kameron McGusty, Charlie Moore, and Isaiah Wong all scoring, the Hurricanes have plenty of options available to put up points once shot opportunities present themselves. In this game, they’ll have to create some extra chances to give themselves enough opportunities to best the Cyclones’ defense.More Picks: Saint Peter’s vs. Purdue Pick & Predictions >>>

Iowa State will Cover If: The Cyclones can hold Miami below 40 percent from the floor. If the Hurricanes are hitting with any regularity, Iowa State cannot keep up with them, so the Cyclones must stay on the Hurricanes and limit their looks. Anything above 60 looks at the hoop or hitting more than 24 of them, and Iowa State is in trouble.

Miami will Cover If: The Hurricanes wait for their moments and fire when they get a good look. Miami has the better shooters by a mile and the quicker team and should be able to create many of its own chances. If the Hurricanes do, they’ll be able to put up enough numbers to pull away.

The under actually seems the play here because Miami has played to the under twice in this event. Iowa State isn’t going to do much scoring, so the question is whether the Cyclones can keep Miami in check. I think they can, but not enough to advance.

The Hurricanes should be able to do enough to cover this small number. Iowa State just cannot score enough to stick with Miami when the Hurricanes are having a good day, and Miami has looked very good in this tournament. This is a manageable spread; give me the Hurricanes. Note: Did you know that we also offer free daily NBA writeups?