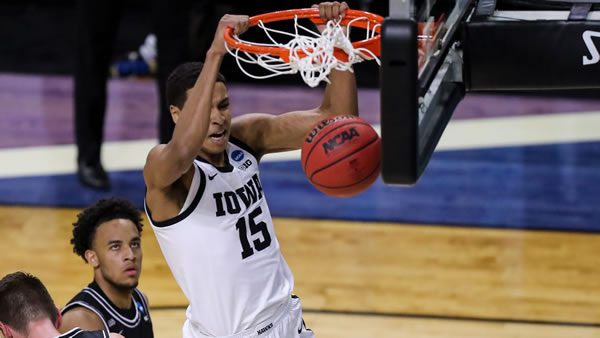 This could make the Wolverines’ season, as they need to come up with one more big win to push their profile into NCAA tournament status. Michigan has mostly displayed inconsistent play this season, as it’s bounced between coming up with solid performances in the Big Ten and dropping a few head-scratchers here and there. But the Wolverines’ schedule has been tough enough that they’re on the cusp of getting a bid, and they just need to get one more good win and not take a bad loss in order to lock down a spot.

On the other hand, Iowa has basically locked down its spot and is trying to get a favorable seed and avoid a repeat of last year. The Hawkeyes were expected to make a good run in the NCAA tournament a year ago, but they couldn’t handle Oregon’s speed and ended up succumbing in a track meet in the second round. Iowa still plays a mostly offensive style and has ratcheted up the tempo in its past three games, but the Hawkeyes do have some defensive prowess this season, as they held Ohio State to 62 points in a win. But that’s not Iowa’s preferred style; the Hawkeyes would much prefer to get up and down the floor and take as many shots as possible. Michigan’s not as much of a defensive side as last year, but the Wolverines still don’t love to run, making this a contrast in styles.

A great example of how far the Iowa defense has come came in the win over Northwestern, as the Hawkeyes forced 15 Wildcat turnovers and held Northwestern to 37.5 percent from the field, allowing them to win without breaking 40 percent from the field themselves. That kind of performance wasn’t really possible for past Iowa teams, but this group has held three of its past four opponents in the 60s, with the one exception being a suddenly hot Nebraska squad.

But the biggest part of the equation is getting Keegan Murray his shots and finding him some help from somewhere on the perimeter. In the first meeting, the Hawkeyes shot just 4-for-22 from behind the arc, one of the biggest reasons why Michigan emerged with a five-point victory. Murray will get his points while he battles with Hunter Dickinson down low, but if he’s the only one who’s scoring for Iowa, it’s not going to work out all that well.

When Moussa Diabate does what he did to Iowa in the first meeting, the Wolverines are pretty tough to beat. Michigan won that game despite allowing Iowa eight more looks at the hoop because Diabate cashed in his chances all night long, hitting 12 of 15 from the field and scoring 28 points.

The problem is that that’s proven to be the outlier for the Wolverines, as he’s usually found himself held to single digits and relegated to a non-factor on the boards. He’s only grabbed more than five rebounds twice this year, and one was the win over the Hawkeyes. Michigan doesn’t have to have him dominate the game when Hunter Dickinson turns in the kind of performance he did against Michigan State (33 points, nine boards). Still, the Wolverines are likely going to need multiple scoring options in a game that should be filled with possessions.

Iowa will Cover If: The Hawkeyes can find and hit shots from the outside. Iowa has to make shots to fuel its style of play, and the Hawkeyes simply didn’t do that often enough in the first meeting. Hitting free throws would also help; Iowa missed seven in the first matchup.

Michigan will Cover If: The Wolverines can take smart shots and not worry about the 3-pointer. Michigan doesn’t shoot the deep shot all that well, and good shots are almost certain to come against Iowa. Michigan shot it poorly from deep in this matchup last time, and the Wolverines need to resist the temptation here.

This total is high for a reason: it’s because these teams tend to put up points. Three of the past four meetings between the teams have gone over 160, despite Michigan’s history as a slower-paced team. Iowa simply makes teams play at their pace, whether or not they handle it well. The over should cash here.

Michigan needs this game badly, but if the Wolverines were getting the games they needed, they wouldn’t be in this situation in the first place. Iowa wasn’t playing great basketball when the teams met in Iowa City, but the Hawkeyes are playing very well now, and I think they have enough to land the cover. I’d buy a half-point here to cover a bucket, but I like the Hawkeyes here.