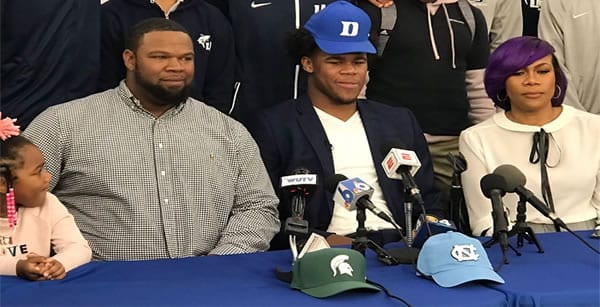 Duke’s season ended in the regional final with a loss to Michigan State. Kansas fell in the second round to Auburn.

Kansas is a talented team, but a distracted one. The Jayhawks have battled plenty of off-the-court issues this season with the program’s case with the NCAA, and that can either cause Bill Self’s crew to band together in the face of adversity or fall apart. Given that Kansas has a fair amount of experience back, I’m going to go with banding together. What makes this Kansas team a strong outfit with the potential to be special is the fact that they have an excellent inside presence in Udoka Azubuike and a quality point guard in Devon Dotson. That’s a large part of the equation to be successful in this era of college basketball, especially when both of them have experience.

Vernon Carey steps into the interior for Duke, and while he won’t be Zion Williamson, he’ll be an excellent inside player who has some range. Carey is listed at 6-foot-10, but he’s much more in the mold of the newer types of big men who can get away from the basket and still be effective. But where Duke could struggle is on its outside scoring. The Blue Devils were not a great shooting team last season, and when Duke doesn’t shoot it well, it usually doesn’t do well in the games that matter most.

To get this team going, Matthew Hurt has to get off to a strong start for the Blue Devils. Hurt has the ability to knock down deep shots and considering that Duke ranked 327th in the nation in 3-pointers last season, his shooting would be a welcome change for the Devils.

The crowd. Bill Self might want to have a chat with Kansas athletic director Jeff Long about scheduling because, for the second straight time, the Jayhawks are the ones who have to face Duke at Madison Square Garden. Because of their unique nature as a private institution that pulls most of their students from the Northeast, the Blue Devils have a huge following in New York, and whenever they play there against anyone besides St. John’s, it feels like a home game for Duke. The Blue Devils are very experienced at the World’s Most Famous Arena, owning a 30-11 record in the Garden under Krzyzewski.

However, Kansas has had Duke’s number as of late, as the Jayhawks have won three straight against the Blue Devils in three different buildings, including the Garden in 2016. In fact, Kansas is the only team in the Champions Classic that Duke has yet to defeat, losing in 2013 in Chicago and 2016. Overall, Self is 3-1 vs. Krzyzewski since becoming the Kansas coach, with Duke’s only win over Kansas in that stretch coming in 2011 in Maui.

Get our List of the best Sportsbooks rated by category!

The Jayhawks can establish Azubuike inside and put his experience to good use in the matchup with Carey. As ballyhooed as freshmen tend to be in college basketball these days, when they have to go up against talented seniors, experience usually wins. Carey isn’t an ordinary freshman by any means, but there’s a big difference between high school seniors in Broward County and one of the best centers in the Big 12.

The Blue Devils can get Hurt going, and Carey can hold his own against Azubuike. Duke doesn’t have the experience to match Kansas in the frontcourt, not at this point in the season. The Blue Devils have to rely on their talent to get them through these early games until Krzyzewski has more than a couple of weeks to teach them how to play on the collegiate level, and that means trusting their abilities and hoping that it’s going to be enough.

It’s tough to pick against Duke at MSG, but this is one of those situations where I think it just makes too much sense. The Blue Devils are more talented, sure, but Kansas has more experience and a wealth of talent itself. When the talent levels are this similar, I want the team that’s been through tough situations and come out the other side together.

Kansas also has extra motivation to get off to a great start because the Jayhawks are still smarting from the loss of the Big 12 last season to Texas Tech and Kansas State. This is the first time since his second year at Kansas that Self isn’t coaching the reigning Big 12 champs, and that’s likely to make the Jayhawks a hungry squad.

There’s also the way these teams closed exhibition season. Kansas annihilated Pittsburg State by 60 points, while Duke squeezed past Northwest Missouri State by just six. Sure, NW Missouri State is the defending Division II national champion and went 38-0 last season at that level, but a D-II squad shouldn’t be challenging the Blue Devils like that. To me, that’s a troubling sign, and it’s one of several reasons why I’ll go ahead and take Kansas.