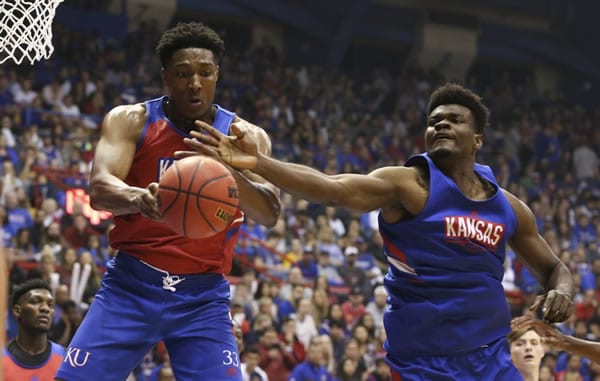 The pressure is on for Tennessee, which needs to add a signature win to its profile in order to secure a top-four seed in the NCAA tournament. The Volunteers have no worries about making the field, as they’ve built a solid profile, but the rest of the schedule is loaded with nothing but land mines. Kansas is the last ranked team that Tennessee will face until the SEC tournament, so a win here would be a critical piece of the profile.

Kansas, on the other hand, is in a pressure-free situation. The Jayhawks still have plenty of op-portunities for quality wins in the Big 12, and they’re not expected to go into Knoxville and beat one of the SEC’s best squads. Given the way the offense has performed for the Jayhawks, it might be a good thing that there’s no pressure on them because Kansas hasn’t been doing much in the way of scoring lately. Only once in the past five games has Kansas hit the 70-point mark, and the Jayhawks lost that game to Oklahoma State.

Then again, Tennessee hasn’t been hitting shots either, as the Volunteers have gone under 70 points in four of their past five games as well. Both teams are defensive aces, which could make scoring even more of a premium than usual in this matchup.

At this point, it might be time for Kansas to just accept that Marcus Garrett isn’t going to be great in his senior year. If anything, he might be heading in the wrong direction. Garrett did score 21 points against Oklahoma, just the second time all year that he’s topped 20 points on the year. But the ball-handling is getting worse, as he’s averaged close to four turnovers a game in each of the Jayhawks’ past four contests.

One of the main reasons Kansas lost to Oklahoma the second time despite Garrett’s points was the Jayhawk guards made several mistakes with the ball (seven turnovers), and David McCor-mack wasn’t aggressive enough inside. Kansas simply does not shoot the ball well enough to get by without a strong inside presence the way a Baylor or Villanova can. If the Jayhawks are going to be anything more than an above-average Big 12 squad, McCormack and Jalen Wilson have to make themselves a presence inside.

That’s the good news. The bad news is that Victor Bailey and John Fulkerson seem to be completely lost at this point. Fulkerson is supposed to be Tennessee’s main presence inside, but he ended up with four points and four rebounds against the Bulldogs, who dominated the Volun-teers inside. Bailey was even worse, missing all five shots he took and playing just 15 minutes.

Without either one contributing, Tennessee just doesn’t have anyone who can take over a game and keep pace with high-scoring teams. Against a squad like Kansas, another languid game from Fulkerson could be disastrous.

Confidence on offense. Good shots rarely ever come against these two teams, and with how much both teams have been struggling to score, a lack of confidence could lead to a very low-scoring affair. Because points are likely to be at a premium in this matchup, any stretch of time where either side loses confidence could be deadly.

The Volunteers can force the Jayhawks into mistakes. Tennessee isn’t going to win this game by outscoring its opponent with offensive prowess; it’s going to get a win by forcing turnovers. Kansas has been known to cough the ball up against good defensive teams, and with the Jayhawks already frustrated with their issues on offense, a strong showing by the Volunteers’ defense could be just enough to pull out the win.

The bet I feel most comfortable making here is the under, as I don’t trust either offense to break 65 points in this game. Neither team appears to be on the same page when it has the ball, and it wouldn’t surprise me if this game is again played in the high 50s or low 60s.

As for the spread, Tennessee’s the better team on paper, but the Volunteers are not playing well right now and are really weak inside. I trust Kansas’ interior attack right now much more than I do Tennessee’s, and I’ll take the Jayhawks and the points in this matchup. Bet this game after it’s started and you get a chance to assess the tempo at the best live betting platform on the planet! —> Bovada!