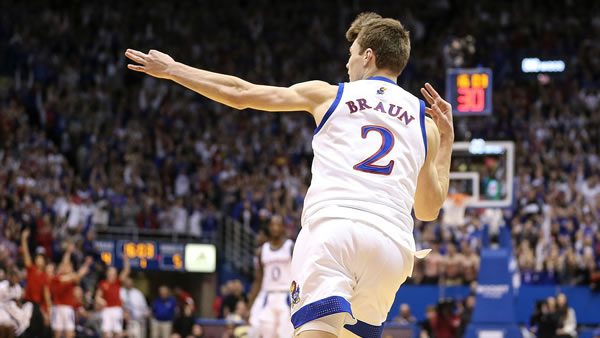 What kind of response does Kansas provide after getting slammed on its home floor? The Jayhawks got ripped to pieces by Kentucky on Saturday, and now they’ve got to head up I-35 and face an Iowa State squad that won’t be the slightest bit intimidated after nearly stealing a win in Lawrence themselves.

The Cyclones have come back to earth a little after their undefeated run through the non-conference, but they’re still a talented basketball team that’s very difficult to beat at home. On top of that, they need a win to try to get themselves in the top half of the Big 12 (and get some quality wins on a profile that is lacking a little). Iowa State has already handled Iowa, Texas Tech and Texas in Ames this year and nearly took down Baylor, and this Kansas squad comes in reeling after seeing its long winning streak at Allen Fieldhouse come to an end. If Iowa State is going to pick up a resume-boosting win, this is one of its best opportunities left on its schedule.

The big question concerning Kansas is whether the Jayhawks’ showing against Kentucky was an aberration or a sign of things to come. Kansas has really struggled to put teams away as of late, but the Jayhawks got away with it because Kansas State and Oklahoma weren’t up to their talent levels. Kentucky, on the other hand, could match Kansas on the floor and never let the Jayhawks back in the game once they took over the contest.

Iowa State is a lot closer to Kentucky than it is to Kansas State, which means the Jayhawks will have to step up in the early going. Lately, that means one of three players, as Ochai Agbaji, Christian Braun and Dajuan Harris provided virtually all of the offense when the Jayhawks faced the Cyclones earlier this season. In that game, the three Kansas guards scored 47 of the Jayhawks’ 62 points and sat for a combined seven minutes the entire game. Beyond that, Kansas really hasn’t gotten much out of its frontcourt or guard Remy Martin, which has made the Jayhawks almost entirely dependent on its guard play. Against Iowa State, it might be possible to get away with it, but not if the Jayhawks turn it over 16 times again.

You’ll probably know by the first media timeout if the Cyclones can hang with the Jayhawks or not, because Iowa State will either show that it’s going to hit its shots or will show that it’s going to have an off night pretty quickly. The Cyclones produced an ugly shooting night in their last home league game, putting up a 31% performance against TCU and going 3-for-26 from behind the arc and scoring just 44 points for the contest.

What saves Iowa State is its defense, as the Cyclones seldom allow teams to break 60 on their home floor. Of the past 13 visitors to Hilton Coliseum, only Texas, Baylor and Arkansas-Pine Bluff managed to top 60, and the only reason the Golden Lions did it was because the Cyclones put the game to bed early and gave their reserves a chance to shine. When Iowa State does need a basket, it’s likely to turn to Izaiah Brockington, the only really consistent scorer that it has. But more often than not, the Cyclones will be looking to stop baskets, not score them.

Kansas will Cover If: The Jayhawks can avoid the turnover bug. Kansas doesn’t have to worry about getting pounded on the glass like Kentucky did because Iowa State doesn’t have the likes of Oscar Tshiebwe, but the Jayhawks didn’t take care of the ball very well in Lawrence. If that repeats itself, Iowa State should be able to emerge with a win.

Iowa State will Cover If: The Cyclones can pressure the Kansas guards and force some mistakes. Iowa State isn’t going to win this game by outshooting Kansas. The Cyclones are going to have to instead rely on the defense to either force Kansas to settle for subpar looks or to create some easy baskets. Do either of those things, and the Cyclones have a good chance.

These teams already played out a rock fight the first time, and Iowa State has been pretty consistent at holding teams in the 50s or less when they come to Ames. Yet Kansas has a total sitting at 70.5, which seems to be way too much if the game is played anywhere near Iowa State’s pace. Take the under here.

The way Kansas played against Kentucky is a serious worry. The Jayhawks didn’t look good in that game, and Iowa State has played tough defense against just about everyone that it has come up against. With the guards being the only weapons that the Jayhawks have, this looks like the wrong place at the wrong time for Kansas to be. I’ll back the Cyclones for the cover, and they might win outright. Bet your college basketball picks for FREE this week by taking advantage of a 100% real cash bonus on your first deposit of $100 to $300 at MyBookie Sportsbook when you enter bonus code PREDICT100 when registering!