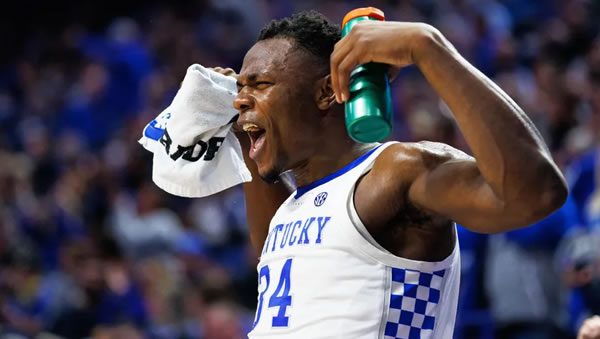 Is Kentucky looking like a home-court hero? It’s sure starting to seem that way after the Wildcats have failed to get wins anywhere outside of Lexington, but Vanderbilt and Texas A&M. Kentucky has won five of its past six contests, but three of those were at home, and one was in Nashville against a weak Vanderbilt squad. Kentucky is sitting second in the SEC, but without much meat on the profile, the Wildcats are looking at a No. 3 or No. 4 seed if the season were to end today.

On the other hand, Kansas is currently sitting on the No. 1 line, but the Jayhawks’ hold on that spot is precarious at best. Getting a No. 1 isn’t as big a deal this season for the Jayhawks, given that they’ll have a tough time actually getting the spot in Chicago, but it’s still important, and a win here over a Kentucky squad that’s shown some real talent would be a huge resume-booster. But Kansas has been playing with fire over the past few contests, as the Jayhawks needed a big comeback to beat Kansas State and needed overtime to survive Texas Tech at home. Against the wrong opponent, the Jayhawks could be in serious trouble. Whether that’s Kentucky, however, remains to be seen.

The key to stopping Kentucky is stopping Oscar Tshiebwe, which makes this a very intriguing matchup given Tshiebwe’s history with the Jayhawks. It was in Allen Fieldhouse last year that he reached the beginning of the end of his time with West Virginia, as he would only play one more game in blue and gold before leaving Morgantown. On that trip to Lawrence, Tshiebwe was completely ineffective, scoring just three points and grabbing five rebounds.

Since moving to Lexington, he’s been a much more effective player. Only High Point and Notre Dame have kept him from getting at least 15 rebounds, so there’s really nothing you can do to keep him off the glass. The best strategy for confronting Kentucky seems to be to worry more about the Wildcat guards and try to make them beat you. Kentucky shoots fifth in the nation from inside the perimeter, but the Wildcats are only middling when it comes to the deep triple. If you can force Kentucky to shoot it from deep (or turn it over, as Sahvir Wheeler and TyTy Washington average almost five turnovers per game), you have a much better chance to neutralize Tshiebwe.

For whatever reason, Bill Self just doesn’t seem to trust David McCormack anywhere near as much as he did a year ago. McCormack remains a valuable offensive rebounder for the Jayhawks, but he hasn’t been anywhere near as effective at scoring the ball as he was a season ago.

But when you have the likes of Ochai Agbaji and Christian Braun on the perimeter, it doesn’t really matter what your scoring is like inside, as both have stepped up their play from outside to offset the loss of McCormack’s scoring and the disappointing play of Remy Martin. That’s the thing that has to scare Kansas’ opponents; the Jayhawks have a fifth gear that they really haven’t used yet, and if they hit it, they’re going to be virtually impossible to beat. But so far, it’s seemed almost like they’re toying with their foes.

Kentucky will Cover If: Tshiebwe can dominate the interior and keep extending the Wildcats’ possessions. McCormack will be asked to do a lot in this game, as he’s an excellent rebounder who can keep Tshiebwe from taking over. Kentucky needs their big man to dominate the contest.
Kansas will Cover If: The Jayhawks hit from outside early and come up with a few steals to give themselves an early lead. Kentucky will get desperate if it falls behind because it’s so young, and desperation in Lawrence plays right into Kansas’ hands.

The total is a little high here. Kansas and Kentucky play almost every year, and defense usually wins the day between these squads. The past three meetings between the teams have all seen fewer than 135 points scored, and taking under 152 has been a winner in seven of eight matchups.

Kentucky hasn’t shown it can do the job outside of Lexington against a quality opponent. This appears to be too small a spread for the Wildcats to hang with the Jayhawks, as Kentucky has been a lot better at home than it has on the road, and Kansas seems the more talented team.
I’ll take the Jayhawks here. Note: It’s a great day to learn how you can save money (no cost to you) every time you bet! A measly five minute investment of your time learning about reduced juice sports gambling will save you hundreds (if not thousands) of dollars per year!