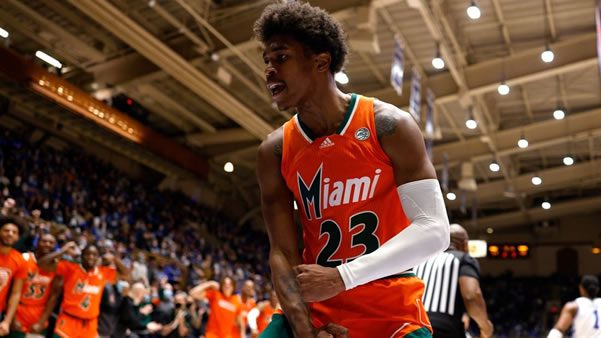 Point Spread: MIA +6/KU -6 at BetOnline - Home of the fastest Bitcoin payouts on the web!

The reputation precedes the Jayhawks: Kansas has a preconceived penchant for choking in this situation, given that Bill Self has five losses to teams seeded nine or worse. But this wouldn’t really be a choke if it happens because Miami is no ordinary No. 10 seed. The Hurricanes only ended up on that line because of a badly disrespected ACC’s reputation that saw them finish fourth in the league and beat Duke, yet land in the lower half of the seed lines.

And the Hurricanes are exactly the type of team that can give the Jayhawks trouble, as Miami forces an abundance of turnovers (8.9 steals per game), and Kansas has had real problems taking care of the basketball. Plus, the Jayhawks have looked far from their best in this tournament. With Ochai Agbaji and David McCormack struggling to get the job done, Remy Martin has had to play a much larger role in this tournament than he did in the regular season. That’s worked out okay for the Jayhawks, as they’re still playing, but Kansas has only looked good in one of its three games in this tournament. If the Jayhawks struggle again to get their stars to perform, the door is open for Miami to pull the upset.

Miami’s criminally underrated defense won’t get a lot of attention from shutting down Iowa State, given how poor the Cyclones’ offense is, but this is a defense that doesn’t give up good looks because its a guard-heavy offense also excels at defending. The Hurricanes create plenty of turnovers, turn them into points, and hold most attacks under 70 points, giving up just 61 points per game on the season. The best example of what this defense is capable of came from facing Auburn, as Miami clamped down on Walker Kessler and company and held the Tigers to a mere 61 points in an easy win.

Miami didn’t have a great showing from its stars in the win over Iowa State, as neither Charlie Moore nor Isaiah Wong shot the ball all that well, but the Hurricanes’ offense doesn’t really require any one player to have a big game as long as someone does the scoring. The Hurricanes got 27 from Kameron McGusty in beating the Cyclones, and if they get a similar performance from someone, they’re in great shape.

Kansas forgetting that it has David McCormack is nothing new for the Jayhawks. The really surprising thing is that the Jayhawks also saw Agbaji disappear against Providence, as he managed just 2-for-8 shooting from the floor and missed all five of his 3-point attempts. The Jayhawks only got away with it because they got to the free-throw line, getting 28 attempts and hitting 20 of them.

Kansas isn’t going to have as much success without hitting a few deep shots, as the Jayhawks went 2-for-15 from behind the arc in beating Providence. If not for Martin’s success at getting fouled, the Jayhawks would have lost that one and left the tournament devoid of No. 1 seeds. Miami doesn’t foul anywhere near as often as you’d expect an aggressive defense would, so getting to the line might not be a viable solution in this game. Kansas has to make shots to advance.

Miami will Cover If: The Hurricanes can turn the Jayhawks over and force them into mistakes. Kansas coughed it up 22 times in a game against Iowa State this year, and the Hurricanes are even better at causing mistakes than the Cyclones. If the Jayhawks are careless with the ball in this game, the Hurricanes will take advantage.

Kansas will Cover If: The Jayhawks can actually make some shots. Miami’s guards aren’t going to give up many easy looks, so Kansas has to hit the shots that actually present themselves. If the Jayhawks miss their looks at the hoop when they’re available, this will not go well for Kansas.

Both teams can play defense really well, so this point total seems to be rather high to me. I think this game is a first one to 70 wins situation, and they might not even get to that number.

Kansas hasn’t really shown that it can cover a number like this against a good team like what Miami has shown. The Jayhawks might survive this game, but they’ll have to do exactly that against a Miami squad that has nothing to lose. Give me the Hurricanes and the points.  Don’t forget to check out my other plays and be sure to bookmark our college basketball picks page, as well as our main free picks page where Kevin West and Rich Crew give out their top selections for FREE!