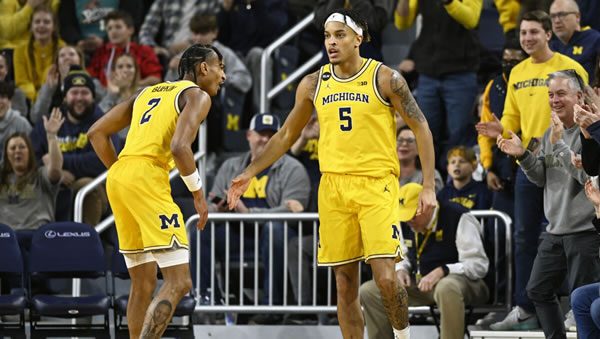 The Maryland Terrapins will look to avenge their embarrassing 81-46 loss to the Michigan Wolverines when they take to the court of the Xfinity Center on Thursday night. Will the switch in venues be enough? The oddsmaker has the Terps as a small -2.5 point favorite, with the total line offered up at 142.5.

The betting line for this game opened with Maryland as a -3 favorite, but the early betting has dropped that line down to -2.5. The O/U line has gone the other direction after opening at 142 and is now -142.5 on most boards.

Michigan picked up a victory over Northwestern by a score of 85-78. Heading into the game, the Wolverines were favored to win, with a point spread of -4. The combined 163 points finished above the 135.5 total line.

Maryland most recently fell to Iowa (81-67). Not only did the Terrapins lose straight-up, but they picked up an ATS defeat as +5.5 point underdogs. The combined 148 points did not surpass the 149.5 total line.

Michigan
Over their last five games, Michigan has a straight-up record of 3-2 while going 3-2 vs. the spread. Over this stretch, the Wolverines’ offense averages 76.4 points per game while hitting 46.4% of their shots from the field. On the defensive end of the floor, they have allowed opponents to shoot 39.2% from the field while allowing 69.0 points per contest.

Maryland
In their previous five contests, Maryland is 2-3 straight-up and 1-4 vs. the spread. In these five games, they have a scoring average of 64.6 points per game on a shooting percentage of 41.9%. Defensively, they allow teams to hit 46.9% of their shots while giving up 72.6 points per game.

This season, the combined power rating of Michigan’s opponents comes in at 79.8. On the other side, Maryland’s combined opponent power rating sits at 78.4.

For the season, the Wolverines have played eight road games and have a record of 3-5. In these contests, Michigan is 4-4 vs. the spread. Offensively, they have averaged 76.6 points per game on a shooting percentage of 44.7%. On defense, the Wolverines are allowing 76.2 points per contest when playing away from home. So far, opposing teams have a field goal percentage of 47.0% in these games.

How Does Maryland Fare At Home?

In their nine games at home, Maryland has a 6-3 record vs. the spread while going 8-1 straight-up. On offense, the Terrapins are shooting 46.9% on their home floor, leading to 75.4 points per game. Defensively, opponents are shooting 40.7% in these contests. The Maryland defense is allowing 62.9 points per game at home.

For the season, Michigan is averaging 73.0 points per game (142nd) while posting an overall field goal percentage of 46.8%. In today’s game, they will be matched up against a Maryland defense that has allowed an average of 64.9 points per contest. This year, opponents have hit 41.6% of their shots vs. Maryland. On the other side, the Maryland Terrapins are coming into the game averaging 70.9 points per game on a shooting percentage of 43.3%. The Terrapins will be facing a defensive unit allowing an average of 70.6 points per contest. So far, teams have hit 42.6% of their shots vs. the Wolverines.

From beyond the arc, Michigan has a shooting percentage of 34.0% while ranking 550th in attempts per game. The Wolverines will be facing a Maryland defense that has a 3-point field goal shooting percentage allowed of 29.8%. Maryland enters the game having hit 32.6% of their looks from deep while averaging 6.91 made 3’s per game. On the other end, Michigan has allowed opponents to hit 34.3% of their shots from beyond the arc.

I expect the Terrapins to play much better tonight, but I still don’t think that they can stay with the Wolverines. Michigan has played everyone tough this season, and yes, they are 1-2 in true road games, but they led Iowa all game before giving it up in overtime, and they fought Michigan State “tooth and nail” down to the wire. They’ve lost seven games this season, but the last six have been close, with only the Iowa game being by more than six points. I’m taking the points. Bet your college hoops picks for free this week by scoring a 100% real cash bonus up to $300 when you use bonus code PREDICT100 at MyBookie Sportsbook!