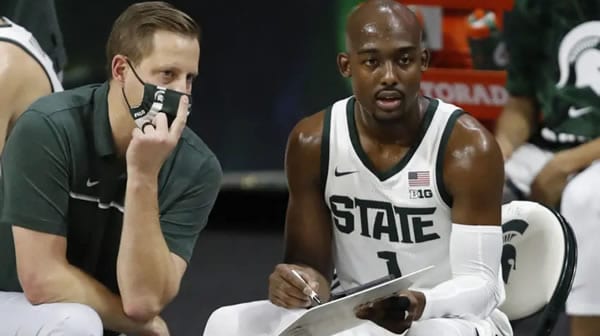 The Champions Classic goes on…in two different locations and without anyone in the stands. Duke and Michigan State were supposed to meet in Indianapolis this year, but while Kansas and Kentucky chose to make the trip to the Circle City, Michigan State opted to take the long journey to Durham. It doesn’t make a heck of a lot of sense for the Spartans, as they’ll be heading right back home for two games before coming back to ACC country in eight days for a showdown with Virginia. But that’s what’s COVID has done, and it does mean that Duke will not have to leave Durham outside of ACC play.

Inside an empty Cameron Indoor Stadium, we’ll see a contrast between youth and experience. The Blue Devils are young again, as they always have been ever since Mike Krzyzewski fully embraced the one-and-done player at Duke. Meanwhile, the Spartans start four juniors and a senior, which could give them an edge at this point in the season. Can Duke’s talent overwhelm Michigan State’s experience, or will Tom Izzo get a rare win (he’s 2-12 all-time against Duke and has never beaten the Blue Devils in the regular season) over his good friend Krzyzewski?

The main thing the Spartans did well against Notre Dame that they didn’t do against Eastern Michigan was they didn’t beat themselves. Michigan State turned the ball over 18 times in the opener against the Eagles, but the Spartans cleaned that up to a more reasonable 12 against the Fighting Irish, seemingly getting themselves on the same page. Most importantly, Joey Hauser and Joshua Langford seem to be figuring out how to play with each other, as the two combined for only one turnover against the Irish.

For this Michigan State team to do anything, those two have to be dominant players. Langford has had his problems staying healthy but appears to be at full strength, and Hauser was a monster on the glass against Notre Dame with 16 rebounds. When both are at their best, they give Michigan State a one-two combination that very few teams can match. Duke is one of those teams, but the Blue Devils don’t have the experience yet that the Spartans enjoy. Michigan State’s starting lineup has a combined 11 years of college basketball under its belt, and the Spartans have to put that to good use in this game.

If Coppin State could have hit its 3-pointers, Duke might very well be 0-1 instead of 1-0. The Eagles lost because they shot just 28 percent from the arc, but they had a chance because Duke kept them from getting blown out by throwing away 22 possessions. That emphasizes rather clearly that Duke is a talented squad, but it’s full of immature talent that doesn’t yet know how to play college basketball. The Blue Devils appear to have their next genuine star in the person of Jalen Johnson, who scored 19 points and pulled down 19 rebounds, but also kept Coppin State in the game by turning the ball over seven times.

The good news for Duke is that it appears that the Blue Devils can count on their defense and rebounding to bail them out in tight spots. Duke pulled down 50 rebounds and held Coppin State to just 32 percent from the floor. The bad news is, Duke shot 53 percent from the field itself in a 10-point win. The reason that’s bad is that when you hit 53 percent from the floor, and the other team shoots 32 percent, you should win that game by 25 points or more, especially when you dominate on the glass as much as the Blue Devils did. Duke instead emerged with a 10-pointer, which says that this team really wasn’t ready for the big stage.

Two games vs. one. Michigan State has not only had a second game to clean things up, but the Spartans have played against a decent opponent from a power conference, something Duke hasn’t seen yet. The Blue Devils weren’t really threatened by Coppin State, but they made some serious errors in judgment that a better team than Coppin State can and will punish them for.

Obviously, Mike Krzyzewski is too good of a coach to let those things go unnoticed, but has he had enough time to get those things out of his team’s system? Getting a second game against a solid mid-major opponent, such as a Wofford or North Carolina-Greensboro, would have gone a long way in Duke settling down and learning how to play at the collegiate level. Unfortunately, the Blue Devils were robbed of that opportunity when Gardner-Webb got COVID and shut its program down for two weeks. Because of that, the Blue Devils will instead go in to face a Michigan State team that already had much more experience than they did and has now had time to clean up its opening-night errors.

The Spartans can put doubt in Duke’s minds right away. Michigan State has been here before and done this before, and the Spartans know how to respond if they hit a tough patch. Duke doesn’t. The Blue Devils have all of one game’s worth of experience in the case of several key players, and it was against a lower-level foe that shouldn’t ever be able to hang with them. If the Spartans can frustrate the Blue Devils early and force them into mistakes, Duke might have a hard time staying positive — especially with no Cameron Indoor Stadium crowd to buoy its effort.

The Blue Devils clean up the mistakes. Duke is the more talented team, and the Blue Devils know how good they are on paper. The problem is that this team is trying to learn how to play college basketball on the fly in an offseason and season, unlike any other. Nobody knew how to deal with the pandemic, and that’s just one more thing that Duke’s freshmen have to adjust to in a season that’s full of adjustments. Duke can’t play like a young team and expect to hang with Michigan State.

Games aren’t played on paper, and I think this one will show that. On paper, Duke should be favored to beat Michigan State, especially at home. But the Blue Devils’ talent edge runs into a sharp experience edge, as the Spartans have done this for the past two seasons while most of the Blue Devils were in high school.

Michigan State might not be the better team in March, but the Spartans look better right now at the start of December. Give me Michigan State here. Start your college hoops bankroll off right by taking advantage of a 100% REAL CASH BONUS on your first deposit of $100 to $1000 at BetNow Sportsbook! The best sportsbook bonus we’ve ever advertised!