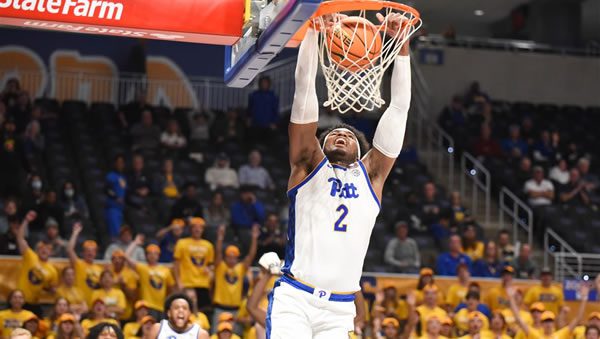 On Friday at the Peterson Events Center, The sizzling Pittsburgh Panthers host the North Carolina Tar Heels. The public is all over the host panthers, but the Tar Heels are also hot right now, the winner of four consecutive games.

This game opened at -5.5 and moved to -6.5 on some boards before falling back down to -5.5, getting both public and sharp action. The total has also been on an upward move, starting at 148.5, and at the time of print, has reached as high as 150 points.

North Carolina is coming off an 80-76 win over Michigan. However, they did not cover the spread in the game as -5.5 point favorites. The combined 156 points finished above the 154.5 total line.

Pittsburgh will be looking for another win, as they most recently defeated Syracuse by a score of 84-82. The Panthers also picked up an ATS victory as they were +3.5 point underdogs. The combined 166 points finished above the 137.5 total line.

North Carolina
Over their last five games, North Carolina, has a straight-up record of 4-1 while going 3-2 vs. the spread. Over this stretch, the Tar Heels offense averages 83.2 points per game while hitting 47.6% of their shots from the field. On the defensive end of the floor, they have allowed opponents to shoot 43.9% from the field while allowing 73.2 points per contest.

Pittsburgh
In their previous five contests, Pittsburgh is 4-1 straight-up and 5-0 vs. the spread. In these five games, they have a scoring average of 79.8 points per game on a shooting percentage of 47.7%. Defensively, they allow teams to hit 39.4% of their shots while giving up 67.8 points per game.

This season, the combined power rating of North Carolina’s opponents comes in at 78.3. On the other side, Pittsburgh’s combined opponent power rating sits at 76.3.

How Does North Carolina Fare On The Road?

For the season, the Tar Heels have played six road games and have a record of 2-4. In these contests, North Carolina is 1-5 vs. the spread. Offensively, they have averaged 80.2 points per game on a shooting percentage of 44.1%. On defense, the Tar Heels allow 82.5 points per contest when playing away from home. So far, opposing teams have a field goal percentage of 46.7% in these games.

How Does Pittsburgh Fare At Home?

For the season, North Carolina is averaging 77.5 points per game (45th) while posting an overall field goal percentage of 45.3%. In today’s game, they will be matched up against a Pittsburgh defense that has allowed an average of 67.5 points per contest. This year, opponents have hit 40.4% of their shots vs. Pittsburgh. On the other side, the Pittsburgh Panthers are coming into the game averaging 61.5 points per game on a shooting percentage of 41.4%. The Panthers will be facing a defensive unit allowing an average of 74.5 points per contest. So far, teams have hit 42.9% of their shots vs. the Tar Heels.

More Picks: Get our Expert’s USC at Washington Pick >>>

From beyond the arc, North Carolina has a shooting percentage of 36.2% while ranking 304th in attempts per game. The Tar Heels will be facing a Pittsburgh defense that has a 3-point field goal shooting percentage allowed of 28.8%. Pittsburgh enters the game, having hit 31.4% of their looks from deep while averaging 5.38 made threes per game. On the other end, North Carolina has allowed opponents to hit 34.2% of their shots from beyond the arc.

I like the total here. Both teams have been lighting it up, with North Carolina averaging 83.2 points on 47.5% shooting and Pittsburgh 79.8 on 47.7. I think each squad can reach or surpass 75 points making the Over 149.5 my play. Place your bets for FREE this week by scoring a 100% real cash bonus up to $500 at the web’s oldest and most trusted online bookie: Everygame Sportsbook! Simply enter promo code PREDICTEM on their Special Offers page after making your first deposit and before placing your first bet and your balance will be automatically updated!