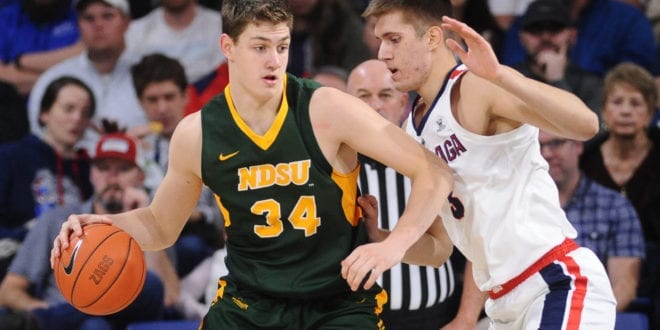 Is the third time the charm for North Carolina Central? This is the Eagles’ third consecutive MEAC championship, and the third straight year that they’ve found themselves sent to Dayton. Things haven’t gone well in the previous two visits, as the Eagles lost a tight one to Cal Poly and were plowed over by Texas Southern a year ago, making this the last chance for the Eagles’ seven seniors.

North Carolina Central is a rarity at the mid-major level: a team that doesn’t try to beat its opponents with the 3-point shot. Instead, the Eagles will try to work the ball inside to Raasean Davis or Jibri Blount, and they’re patient enough to wait out their opponents until an opportunity presents itself. However, patience doesn’t always mean that a team is good at holding the ball, and North Carolina Central isn’t, as it turns the ball over 15 times per game.

North Dakota State was not supposed to be here. The Bison were only a 4 seed in the Summit League, which had been dominated all season by South Dakota State and Nebraska-Omaha. But the Jackrabbits got picked off in the first round by Western Illinois, which opened the door for the Bison to steal the bid. North Dakota State doesn’t have a single senior on its roster, and the Bison feature six freshmen. But their leader is junior guard Vinnie Shahid, who serves as the team leader in points and assists and is firmly in command of his squad.

Duke. While North Dakota State would probably love to get a chance to play the Blue Devils, North Carolina Central has dreamed of this matchup for decades. Despite residing in the same city, the Blue Devils and the Eagles have never played an official matchup. Their one and only meeting came in a bolted gym in 1944, played under complete secrecy because of racial segregation in Durham. This time, they’d be playing in front of millions of television viewers in Columbia, S.C., a dream come true for the Eagles’ players.

That brings pressure, and it can work either way. North Carolina Central will come in motivated to get that matchup with Duke that has eluded it for so long, but they can’t look past the Bison, who will be just as motivated to keep their season alive and get another shot to knock off a giant.

North Carolina Central will Cover if:

Experience matters. The Eagles’ seven seniors have been to Dayton twice before, and they know what it’s like to try to learn about an opponent and get ready for them in less than 72 hours. Nobody from North Dakota State has ever played in the NCAA tournament before, and the Eagles need to use what they’ve learned from two past trips to get the Bison out of their comfort zone early.

North Dakota State will Cover if:

The Bison can turn the game into a free throw shooting contest. For all of its lack of experience, it doesn’t show up when North Dakota State is at the foul line. Of the eight players who play at least 18 minutes per game, Sam Greisel is the only one who doesn’t shoot at least 73 percent from the free throw line. If the game gets down to the wire, it’s essentially over if North Dakota State has the lead, because Jared Samuelson and Tyree Eady both shoot over 90 percent from the stripe.

North Carolina Central has been here before, and it desperately wants to get out of Dayton this time. North Dakota State doesn’t have much in the way of experience, but I’ve got to take the Bison anyway because they are the more talented squad. These teams do not score often, and low-scoring games tend to devolve into free throw shooting contests.

That possibility heavily favors North Dakota State, as seldom-used Julian Waters is the only player for North Carolina Central that shoots better than 76 percent from the foul line. If the Bison get the lead early, they’ll be fine. That’s the outcome that I’m going to expect here, and a line of just five points is an inviting one. At the end of the day, the Bison are better, and I will take them to cover.