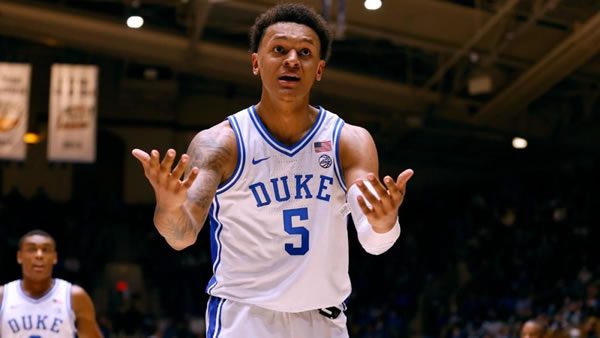 Suddenly, N.C. State is showing signs of life away from home, as it managed to pull off a pair of surprising victories at Louisville and Virginia Tech. The Wolfpack had been struggling through the season with defeats against Miami and Florida State (although the Miami loss is proving to be better than expected) after a weak showing in the nonconference, but a win against Duke would go a long way toward proving that the Wolfpack really are a fringe NCAA tournament team.

Duke, on the other hand, has its sights set on winning the ACC and sending coach Mike Krzyzewski out a winner in his final season on the sidelines. So far, the Blue Devils are getting the job done with defense, much like his teams used to do before the one-and-done craze made that much harder to defense to take control of games. The Blue Devils have seen the under cash in four of their past five overall, and the under is likely going to need to be the play if Duke is going to keep things rolling

Stopping State is built around stopping guard Dereon Seabron, as the 6’7” sophomore is pretty much the do-everything player for the Wolfpack. Seabron currently leads the Wolfpack in points, rebounds and assists, which speaks both to his versatility as a player and the Wolfpack’s lack of depth on each side of the floor. N.C. State hasn’t really been able to establish anyone else as a top threat to opposing defenses, even with Jericole Hellems and Terquavion Smith both averaging close to 15 points per game.

Because State is so dependent on one player, good teams have been able to force someone else to beat them, one reason that the Wolfpack is a mere 9-8 on the season. Seabron puts up a ton of points, but he doesn’t score from the outside and averages almost three turnovers per game, making it fairly straightforward when a good defensive team decides to focus its energy on stopping them.

When you have someone like Paolo Banchero in the paint, it’s a lot easier to play defense, as Duke is finding out. The Blue Devils missed out on the tournament last year for the first time since the mid-1990s, and they’ve put any thought of repeating that to bed with a much stronger freshmen class that actually takes defense seriously.

Duke certainly can put up big numbers on the offensive end of the floor, but this team seems more concerned with slowing down its opponents and not making mistakes of its own. The Blue Devils have an assist-to-turnover ratio of almost 2, almost unheard of for a team that’s as young as Duke always is. The Blue Devils shoot it well and rebound well thanks to Banchero and Mark Williams inside, and they don’t tend to get frustrated and put teams on the line. About the one thing Duke doesn’t do all that well is hit from the outside, but the Blue Devils have been adequate enough from deep to get by.

N.C. State will Cover If: Seabron can find his shooting spots and get his points while making the Duke defense work hard enough that it can’t score as effectively on the other end. State cannot fall in a hole in this game if it hopes to stay within shouting distance; Duke will blow the Wolfpack out of the building if they get off to a poor start. State has to make sure the game is close after 10 minutes.

Duke will Cover If: The Blue Devils can take Seabron out of the game and force someone else in red to beat them. Duke is not going to let Seabron dictate this game; Krzyzewski will try to take away State’s best weapon and force the Wolfpack to come up with a Plan B. If that doesn’t happen, Duke should roll.

Duke’s defense knows its assignment, which means that keeping N.C. State to 69.5 points or less should be something that the Blue Devils can handle. As long as Duke plays its usual strong defensive game, State is going to struggle to score here.

State coming to Cameron after thumping Louisville is not really a situation where I want to place my money on the Wolfpack. This is a lot of points to cover, but State’s offense is just so dependent on Seabron playing well that I think Duke can do the job. The Blue Devils have long excelled when they need to take one team out of the running, and I think that happens again here. Give me Duke. Want more bonus dollars from one of the BEST sportsbooks on the internet? Deposit $100 to $500 and Bovada Sportsbook will give you a 50% real cash bonus! They have the best live betting platform on the web, offer rebates on ALL your bets and pay FAST! Click here to see why they’re one of the most popular bookies on the web!