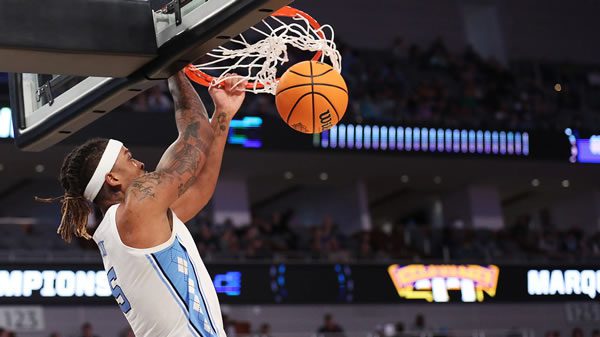 It’s the matchup that everybody and nobody simultaneously wanted on college basketball’s grandest stage. Duke and North Carolina have never before met in the NCAA tournament, and now they face off in what could be Mike Krzyzewski’s final game. Naturally, this represents a terrifying prospect to both fan bases, as neither wants to lose the biggest game in the history of the rivalry, and Duke certainly doesn’t want to see North Carolina end its legendary coach’s career after the Tar Heels already spoiled his final game at Cameron Indoor Stadium.
But which meeting will this game resemble, the first or the second? In the first matchup, the Heels looked like they didn’t belong on the same floor as Duke, as the Blue Devils started hot and never let up in burying Carolina by 20 points in Chapel Hill. But the Heels turned the tables in Durham by locking down Duke’s shooters and spreading out their own offense. What seems clear is that there will be points scored in this matchup; it’s just a question of who is going to be doing most of the scoring. With Duke’s offense hitting 78 in all four of its tournament games, Carolina will have to make sure its offense doesn’t go cold at the worst time if it’s going to reach Monday night.

Armando Bacot represents the matchup nightmare for most teams, but it is clear now that Brady Manek is the glue that holds this team together. With Manek on the floor, Carolina easily slammed Baylor, leading by 25 points until a questionable call led to his ejection. Without him, the Heels saw the lead completely disappear and had to scramble in overtime. Against Duke, the Heels have to make sure that they get to the line often and take good shots when they come.

Caleb Love, for example, made a big difference in the win over Duke, but that was because he kept getting himself to the charity stripe, as he shot 4-for-17 from the field but hit 12 foul shots. The rest of the Heels’ scorers were all around 50 percent, which is what needs to happen if they’re going to best Duke. North Carolina will get good looks in this game; the Heels just have to be careful not to be overwhelmed by the moment.

Duke’s concern is different: making sure the offense doesn’t become one-dimensional again. The Blue Devils aren’t a deep team at all, but they’re also not meant to be a one-man team. Paolo Banchero seemed to miss that memo in the game in Durham, as he took 26 of Duke’s 69 shots against the Heels and only hit 11 of them. It meant he finished with 23 points, but the rest of the Blue Devils didn’t have anywhere near as effective a performance save for Mark Williams.

That can’t repeat itself. It’s OK for Banchero to be Batman if that’s how the game unfolds, but he’s going to need a Robin and possibly even a Nightwing to turn this matchup into a win for the Blue Devils. Williams and Jeremy Roach were both effective against the Tar Heels in the second meeting, but Roach didn’t shoot enough because too much of the offense flowed through Banchero. Duke has to focus on getting better shots for the entire offense.

North Carolina will Cover If: The officials call the game closely. Duke sends teams to the line fewer than anyone in the nation, which leads to far more than a few jokes about the Blue Devils getting all the calls. Carolina has to get the ball inside and make sure that Duke has to either foul their post players or give up the basket. If the Blue Devils are able to play physically, this will be tough for the Heels.

Duke will Cover If: The Blue Devils don’t try to force things and just go with what’s open for them. Duke is going to find shots against this defense. But the Blue Devils have to make sure they are taking the right shots. If they’re going to A and forcing a shot, they might get a few to go down, but they’ll play into the hands of Carolina’s rebounders. The Blue Devils must be willing to take option B when it’s open.

These teams don’t stop each other. Duke got into the 80s in both meetings this season, and Carolina is hitting on all cylinders on offense right now. This number is right where it should be, and I think the over is going to cash here.

With how well Carolina is playing, I don’t want to fade them in this spot. The Blue Devils might very well win the game, but I’m not sure they can cover this number. I think this comes down to the final minute, and in that setting, I want the points with Carolina. Bet your North Carolina Tar Heels vs. Duke Blue Devils pick and ALL your March Madness bets for FREE by taking advantage of a 100% real cash bonus up to $300 at MyBookie Sportsbook! (Must use bonus code PREDICT100).