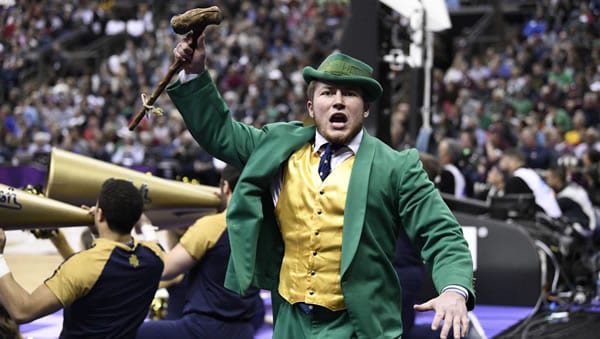 While Notre Dame’s football team makes a run at a national championship, its basketball team starts a gauntlet through some of the most formidable opponents in the nation. The Irish decided to schedule anyone and everyone who was in the neighborhood in their non-conference slate, mainly because Mike Brey figured that just about every game was precarious in the COVID era. It’s a bold play given that the Irish were a middling team, but Brey believes that his team is ready for the challenge.

It’ll have to be in order to take down that’s in transition but still incredibly talented. Joey Hauser is finally eligible to play after being forced to sit out last year, and with Joshua Langford still, around, the Spartans believe they’ve got the talent to make a run in a loaded Big Ten. However, they didn’t impress in their opener against Eastern Michigan. Can they make a stronger showing in their second time out, or will Notre Dame prove that Brey’s belief isn’t just bluster?

On first glance, it’s hard to see how Notre Dame can meet the expectations that Brey has for this year’s squad. Notre Dame has lost both of its two leading scorers from last year, one of whom was John Mooney, the Irish’s top rebounder. However, the Irish do have their point guard back from last season in Prentiss Hubb, and they seemed to be showing signs of building momentum at the end of last year.

The big question for Notre Dame is whether the Irish can play more consistent defense. During its strong finish, Notre Dame held five of its final seven opponents to 71 points or less, but in two of its final three defeats, the Irish conceded more than 80 points. Notre Dame only topped 80 points in one of its final 12 games last season, and without Mooney on the roster, it seems unlikely that the Irish would have the horses to keep up with the likes of Michigan State. In order to stay in this game, the Irish have to keep Michigan State’s offense in check. If this game goes over the total, the Irish have little hope.

Michigan State is definitely in transition at this point in the season, but the Spartans got some unexpected help in their opening game from Foster Loyer. Loyer barely played in his first two years in East Lansing, but against Eastern Michigan, he got hot and drained six 3-pointers on his way to a game-high 20 points.

However, the Spartans also committed 18 turnovers in the win, as Langford and Hauser struggled to get on the same page. Had Michigan State not shot 42 percent from behind the arc and held Eastern to just 18 percent from deep, the Spartans might very well have lost their opener. If Michigan State is going to contend for a title, it’s got to get better performances out of both Hauser and Langford, particularly the latter. Even though he scored 10 points, 37 percent shooting and four turnovers will not cut it.

Preparation vs. Experience: Michigan State has a game under its belt, albeit one in which the Spartans didn’t play all that well. However, game experience is a critical thing, and Michigan State has it while Notre Dame doesn’t. The Spartans might have committed 18 turnovers in their opening game, but the odds are high that they got some of those errors out of their system against a lesser opponent that wasn’t likely to threaten them. The Irish haven’t had the chance to play against anyone except themselves, which means they haven’t had a chance to make those mistakes themselves. Against a more experienced opponent, and with little experience of their own, the Irish might be in a world of trouble.

The Irish can get good shots on the perimeter and knock them down. The one thing that might save the Irish from making mistakes is the fact that they have an experienced point guard, and if Hubb can find shooters such as Robby Carmody, Nate Laszewski, and Ryan Cormac, Notre Dame has the ability to stay in the game and put some real pressure on Michigan State. The Spartans likely won’t shoot 42 percent from deep again, so if the Irish are hitting, the opportunity is there.

What I saw from Michigan State in the opener really worried me, and I’m not sure they can clean up enough mistakes to get through this game and cover a double-digit spread. The Spartans should become a good team eventually, but I think there’s too much to do against a team that wants to prove it can play. I’ll take the Irish and the points here. Bet your college basketball picks LIVE while the game is going on at the sportsbook with the BEST live wagering platform on the planet! —> Bovada Sportsbook! (50% bonus too!)