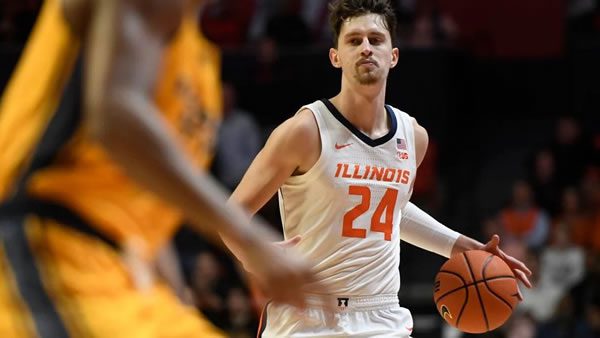 The Illinois Illini host the Ohio State Buckeyes on Tuesday night on the floor of the State Farm Center in Champaign, Illinois. The tip-off for the game is scheduled for 7:00 PM ET and can be watched on ESPN. The CBB betting board lists the host as a -4 favorite with a total line of 144.5.

This line opened with the Illini, a small -1.5 favorite, and betting action by both the public and some sharp money has driven this up to -4. The total has been on the decline, with an opener of 148; it is now on most boards at 145 or fewer points.

Ohio State picked up a victory over Iowa by a score of 93-77. Heading into the game, the Buckeyes were favored to win, with a point spread of -3. The combined 170 points finished above the 154 total line.

Going into their last game, Illinois was the betting favorite at -6.5 but fell to Indiana by a score of 80-65. The combined 145 points did not surpass the 145.5 total line.

Ohio State
Over their last five games, Ohio State has a straight-up record of 1-4 while going 1-4 vs. the spread. Over this stretch, the Buckeyes’ offense averages 71.4 points per game while hitting 41.5% of their shots from the field. On the defensive end of the floor, they have allowed opponents to shoot 43.2% from the field while allowing 71.6 points per contest.

Illinois
In their previous five contests, Illinois is 4-1 straight-up and 4-1 vs. the spread. In these five games, they have a scoring average of 74.6 points per game on a shooting percentage of 45.4%. Defensively, they allow teams to hit 44.4% of their shots while giving up 65.0 points per game.

This season, the combined power rating of Ohio State’s opponents comes in at 80.2. On the other side, Illinois’ combined opponent power rating sits at 78.9.

For the season, the Buckeyes have played seven road games and have a record of 2-5. In these contests, Ohio State is 2-5 vs. the spread. Offensively, they have averaged 71.4 points per game on a shooting percentage of 42.4%. On defense, the Buckeyes allow 70.0 points per contest when playing away from home. So far, opposing teams have a field goal percentage of 40.6% in these games.

How Does Illinois Fare At Home?

In their 11 games at home, Illinois has a 7-4 record vs. the spread while going 9-2 straight-up. On offense, the Fighting Illini are shooting 46.7% on their home floor, leading to 79.3 points per game. Defensively, opponents are shooting 39.7% in these contests. The Illinois defense is allowing 60.1 points per game at home.

For the season, Ohio State is averaging 73.8 points per game (123rd) while posting an overall field goal percentage of 47.4%. In today’s game, they will be matched up against an Illinois defense that has allowed an average of 64.5 points per contest. This year, opponents have hit 40.3% of their shots vs. Illinois. On the other side, the Illinois Fighting Illini are coming into the game averaging 75.8 points per game on a shooting percentage of 45.3%. The Fighting Illini will be facing a defensive unit allowing an average of 66.7 points per contest. So far, teams have hit 40.8% of their shots vs. the Buckeyes.

From beyond the arc, Ohio State has a shooting percentage of 37.3% while ranking 374th in attempts per game. The Buckeyes will be facing an Illinois defense that has a 3-point field goal shooting percentage allowed of 29.4%. Illinois enters the game having hit 36.7% of their looks from deep while averaging 9.23 made 3’s per game. On the other end, Ohio State has allowed opponents to hit 30.2% of their shots from beyond the arc.

The Buckeyes did put up 93 against Iowa, but the Hawkeyes are one of the weakest defensive clubs in the Big Ten. Before that, Ohio State scored 67 or fewer points in three straight with FG% of 37.5, 34.3, and 35.7. The Illini got lit up for 80 points in their last game, but I’m going to toss that out as I think with college kids, there is the tendency for over-confidence. They were riding a four-game win streak, returning home from a blowout win, and facing a shorthanded Indiana team. Ohio State lost five straight before the Iowa win, and I think they’re overmatched here against an Illinois team that has no problem extending the margin with all victories by seven or more points. Take Illinois -4