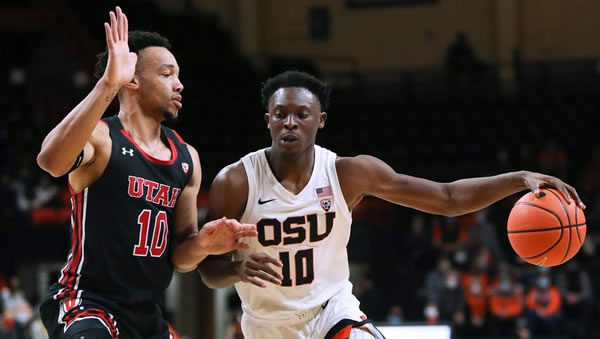 Usually, a rivalry game is chock full of exciting finishes and tight battles throughout the teams’ history. The battle or Oregon and Oregon State is…not that. It’s not so much a one-sided situation in terms of results, as the Ducks only lead the past 20 games by a margin of 12-8, but 17 of the past 20 games between the teams have been decided by nine points or more. Only in a 2015 meeting in Corvallis did the game actually come down to the final possession, with most being blowouts long before the buzzer.

So with that said, you’re not worrying about either the Ducks on the moneyline or the Beavers to cover. Based on the history, the only bets on the board worth pursuing are either Oregon to cover or Oregon State to win the game outright, as this spread is too small in the face of that long history. The Beavers have played a bit better as of late, winning their past two games, but they seem to have lost the magic from last season that made them an Elite Eight squad. Oregon’s not quite that bad in terms of record, but the Ducks have also been a disappointment this season. The good news for the teams is that with the College Football Playoff championship happening, almost nobody’s going to be watching this one. But for bettors, this is going to be a tough one to figure out.

What makes Oregon so maddening is that the talent is there with the Ducks: they’ve shown the ability to give Baylor a real scare in a game where they actually led at halftime before losing by eight. On the other hand, their resume also includes a 29-point loss to Houston and an overtime loss to Arizona State. This team hasn’t yet figured out what it wants to be, as the Ducks sometimes shoot it brilliantly and sometimes can’t hit the Pacific Ocean from 15 feet. Will Richardson is the main man that Oregon counts on for scoring and assists, but beyond him, there’s a bunch of players that are all about equal in terms of their stats. That can be a good thing because it’s hard to stop all five of them, but someone has to step up to pull a game out of the fire.

The Beavers just don’t have enough bodies who can put the ball in the basket. Jarod Lucas and Warith Alatishe have emerged as reliable options, but beyond that, there really isn’t a lot to like about this Oregon State attack. The Beavers are decent shooters, but they don’t get enough looks at the basket beyond their big two to make them a decent attack.

Really, this seems to be a team that caught lightning in a bottle a year ago and hasn’t yet found what made them so effective in March. Oregon State doesn’t seem to believe that it truly should be competing in the top half of the Pac-12, and until the Beavers get that figured out, the struggles will continue.

Oregon will Cover If: The Ducks hit their shots beyond just Will Richardson. Someone else is going to have to step up to give the Ducks more than one option, or the Beavers are going to be able to completely shut the offense down.

Oregon State will Cover If: The Beavers can keep up the momentum that they’ve built in their past two games. Oregon State has gotten the offense going pretty well in wins over Nicholls State and Utah, and there are signs that the Beavers might be turning a corner. But the Beavers have to make plays down the stretch and prevent doubt from creeping in to pull this off.

Oregon State’s defense is less than stellar, which means that points are likely to be fairly easy to come by, even with Oregon’s slow tempo. All three matchups last year went over this number, and I think that can happen again here.

I don’t really trust either team in this situation, as I have major questions about both teams’ offensive efforts. Oregon has shown a little more consistency than Oregon State, though, so I’ll back the Ducks on the spread to keep the Beavers’ misery coming.