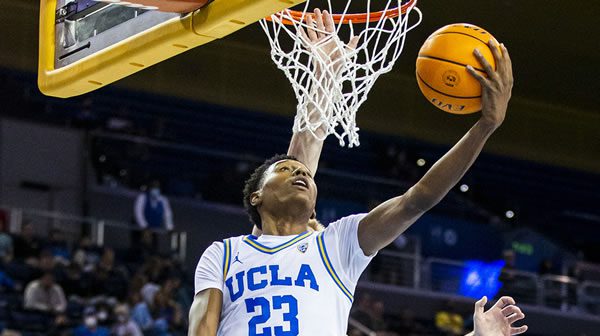 In previous years, this might have been a must-watch game, but Oregon really seems to be down this year. The Ducks haven’t yet shown that they can handle the challenge of a resurgent Pac-12, as they’ve managed just a 2-2 start in league play despite facing three of the four weakest teams in the conference to date. Oregon has been a tournament fixture in years past, but the Ducks seem highly unlikely to make it this time around.
On the other side of the coin, UCLA is trying to knock off the rust from taking a forced several weeks off because of COVID protocols. The Bruins did manage to get their two most recent games played, but they didn’t look sharp in their win over California, managing to emerge with an eight-point victory. That makes this a difficult matchup to pick because the Bruins have the talent to swamp the Ducks if they’re playing their basketball, but if UCLA isn’t on the same page after all of those days away from the court, the Bruins are vulnerable here.

These Ducks can’t play defense. Oregon usually plays defense well enough to have a lot of success, but the Ducks simply are not getting the job done when they don’t have the ball. Oregon’s allowing teams to shoot almost 45 percent from the floor, in part because the Ducks are not good rebounders. What that’s meant is that even when Oregon is able to deny a good look at the basket, it doesn’t always matter because the Ducks can’t prevent the offensive rebound.
Ironically, that’s helped Oregon against guard-heavy teams like Baylor, but that might be a problem against a team with a solid inside presence like UCLA. Myles Johnson isn’t a top center by any means, but the Ducks really have nobody to challenge him inside, so there’s a good chance they’ll have to settle for jump shots and hope for longboards.

UCLA is a guard-heavy team that can rebound, in large part because the Bruins’ guards view it all as a collective responsibility, and four different UCLA guards grab at least four rebounds a game. More importantly, the Bruins know how to score the basketball, as Johnny Juzang and Jaime Jaquez picked up right where they left off during last year’s NCAA tournament. Being guard-heavy means that the Bruins are accurate 3-point shooters. They usually don’t turn the ball over, and depending on whether it’s a short or long rebound, they’re usually a good bet to either have one of their guards or Johnson get the ball.
The Bruins struggle with closing out games, mainly because they only shoot 69 percent from the free-throw line. UCLA does have two reliable options in Juzang and Tyger Campbell to close out games, but outside of those two players, UCLA doesn’t have anyone who shoots better than 73.7 percent from the stripe. When a team can hang with the Bruins, it opens to door for a backdoor cover.

Oregon will Cover If: The Ducks can make their shots. Oregon simply isn’t going to slow down UCLA because the Bruins’ guard play is just too good, so the Ducks’ only real chance is if they make their shots and force UCLA to keep scoring on their end. If the Ducks give up a long run, this isn’t going to work.UCLA will Cover If: The Bruins can clean up on the glass and extend their possessions. Oregon is not great at either defense or rebounding, so UCLA has an excellent chance to get a good lead early if it can establish itself in the paint from the opening minutes. If the Bruins do that, they cover.

I don’t really see much to suggest that Oregon can keep UCLA below its total of 75.5 points in this game. If this was a past Bruins team that didn’t play all that fast, the Bruins might have some problems with scoring the ball, but UCLA is quicker now, and Oregon doesn’t play much defense. The Bruins should score plenty.

I’m just not buying that Oregon is good enough right now after the Ducks barely scraped by Oregon State in their previous game. That’s a rivalry game, but that’s still not a game that Oregon should have had issues with closing out. The Ducks aren’t as good as they’ve been in past years, and I think UCLA can earn a comfortable win here. Give me the Bruins.