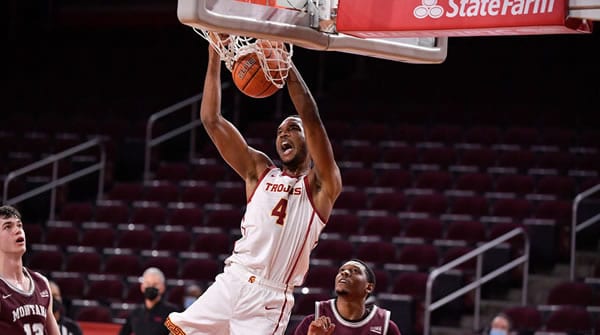 Point Spread: ORE +3.5/USC -3.5 (BetNow - They offer the ultimate bankroll booster! Deposit anywhere from $100 to $500 and they’ll DOUBLE your deposit with a real cash bonus!)

A win here might be enough to push these teams over the line and into the NCAA tournament field. Oregon’s doing all it can to put itself into the mix as well as avoid an unbelievably difficult second-round game with Baylor or Gonzaga, as it has won five straight and pulled itself into third place in the Pac-12. If the Ducks can run the table — and they’ve got two reasonable road games and two difficult ones — they’ve got a good shot to get onto the 7 or even 6 line and earn a reasonable chance to make a run to the Sweet 16.

USC’s already in a good spot as far as the tournament goes and wants to avoid facing a first-round trap if at all possible. The Trojans have been the top team in the Pac-12 for most of the season, but they’re coming off a loss after they got tripped up by Arizona (who isn’t eligible for the postseason at all). With a win here, the Trojans will likely punch their ticket to the tourna-ment, as they don’t really have any potential for a bad loss the rest of the way unless their trip to Oregon State is rescheduled. As it stands, this will be USC’s final home game of the season, which means the last chance for possible No. 1 pick Evan Mobley to play at the Galen Center.

Chris Duarte is trying to will the Ducks back to the NCAA tournament, but it’s been defense more than Duarte’s scoring that’s really getting the job done for Oregon. On paper, Duarte has been scoring the ball well for the Ducks, but that’s only because he’s been taking a lot of shots. In two of Oregon’s past three victories, Duarte shot 33 percent or less, but Oregon survived an-yway because the defense got the job done. Oregon has held each of its past four opponents to 64 points or less, which has helped the Ducks survive the offense hitting a lull during this win-ning streak.

To keep it up, the Ducks have to get a big performance from Eugene Omoruyi in the frontcourt and force plenty of turnovers with their guards. Oregon’s game is based around forcing oppo-nents to waste possessions, and the Ducks average 7.6 steals per game. If the Ducks can keep the ball out of the hands of the Mobleys before it ever gets to the frontcourt, they’ll have a sig-nificant edge.

Stopping USC has been built around one thing: stopping Evan Mobley. Of course, stopping Mobley is a pretty difficult task, which is why he’s likely to be a top-5 pick in the NBA draft. Mobley and brother Isaiah average a combine 26.7 points and 16.5 rebounds, and few teams have the size needed to match up with them down low.

On the rare occasions when a team can match the Mobleys inside, the Trojans have another top weapon in the person of Tahj Eaddy, who is playing like a senior at the moment by averaging 21.3 points per game in the past three contests. Eaddy has only gotten more important to SC as the season has gone on, and his importance to the Trojans was on full display in the loss to Ari-zona, as him fouling out cost USC dearly in defeat.

Three games in a week. This is a rescheduled game because of COVID issues, which means this a rare instance where these teams have to play this game before going off on their regularly scheduled road trips. That puts a lot of pressure on both teams because both will play away after this game is over, and both need to make sure they avoid taking a bad loss.

Oregon, in particular, has plenty to fear because the Ducks could undo any good they do in Los Angeles if they manage to lose on Saturday at California in their third game of the week. USC doesn’t have to worry about an anchor like the Golden Bears, but the Trojans face the toughest trip in the Pac-12 after getting through Oregon, as they’ve got to go to the Rockies and face Colorado and Utah. With both teams knowing what’s coming, this could result in a slower-paced first half, as both try to pace themselves to make sure they don’t tank their chances for the rest of the week.

The Ducks can keep the ball out of the low post. Oregon cannot match up with the Mobleys down low, so its best chance is to keep the ball from getting there in the first place. While Eaddy has been a scoring machine in the past three games for the Trojans, he’s also turned it over five times in those games and could be susceptible to the Ducks’ pressure.

The Trojans can work the ball inside and avoid mistakes. If USC can keep the ball down low, Oregon’s going to have a hard time doing much of anything on defense to keep the Mobleys from dominating the game. If the Trojans get their key players in foul trouble again, they’re going to have problems.

Oregon’s been playing very well on defense as of late, but the Ducks haven’t seen a challenge quite like the Trojans’ interior game. Oregon’s offense simply isn’t playing well enough to stand up to the Mobleys the way Arizona did, as the Ducks don’t shoot the 3 well enough to neutralize the rebounding and interior scoring edge that USC naturally has.

I’m betting the under in this situation, but if you want to pick a team, I’d take the Trojans and the chalk. Question: Did you know that you could be betting on games at -105 odds (BetAnySports Review) instead of the spendy -110 option your book is dealing you? Making the switch to reduced juice betting will save you THOUSANDS of dollars over the long haul! Click here to start saving big bucks TODAY!