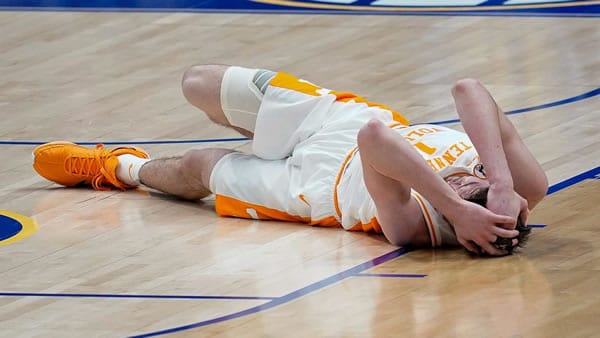 One thing we can say for sure: the winner will be orange. The hot team from the West Coast brings its nasty perimeter defense to Indianapolis, as Oregon State tries to ride its strong finish to its first NCAA tournament victory since 1982. The Beavers are only in the field for the second time in 30 years after beating UCLA, Oregon, and Colorado to win the Pac-12 tournament and likely securing coach Wayne Tinkle’s job for at least another few seasons in Corvallis.

On paper, this is a winnable matchup for the Beavers, as Tennessee was supposed to be the best in the SEC but has underachieved all season long. But the Volunteers showed what they could be in the SEC tournament by pushing Alabama to the limit before failing to hold on, and they’ve got the kind of team that could make life very difficult for the Beavers. The Volunteers like to punish teams inside, while Oregon State prefers to do its best work around the 3-point arc. Which team can impose its will here?

Ethan Thompson will shoot it frequently, and if he’s hitting, Oregon State can be pretty tough to beat. The Beavers’ goal is to win with defense, but they also do a pretty solid job of hitting 3-pointers and scoring from the free-throw line. Other than Warith Alatishe, the one big man in the Oregon State starting five, the Beavers all shoot 80 percent from the stripe or better, so if they get a lead in the last five minutes, a comeback is pretty difficult to pull off.

That’s also because of what the Beavers do best: taking away the arc. Oregon State was easily the best in the Pac-12 at defending the 3-pointer this season, and their 3-point defense was the biggest reason that they handed Oregon two losses, including a relatively easy win in the Pac-12 tournament. On the other side of the coin, the Beavers are really weak inside on the defensive glass, ranking behind everyone in the Pac-12 except Washington in that category. If Tennessee cleans up on the glass and gets multiple shots per possession, the Beavers are in big trouble.

More Picks: Get Dan’s Colgate vs. Arkansas Pick to Bet >>>

The biggest question for Tennessee is what they’re going to look like inside. Tennessee likes to pound the ball inside whenever it can, usually with forward John Fulkerson. However, Fulkerson took a shot to the face in the Volunteers’ win over Florida and was absent for the loss to Alabama. He’s had surgery on his face since the SEC tournament, and he’s a question mark for this one.

If he doesn’t go, Tennessee’s still going to try to get the ball inside; the Volunteers are just going to rely on their guards to do it instead. Jaden Springer actually can shoot the 3-pointer very well, hitting over 40 percent of his deep shots, but only about 1 in 6 shots he takes is from beyond the arc. Ditto for Keon Johnson, Tennessee’s second-leading scorer. In fact, of Tennessee’s top six scorers, the only one who seems to prefer hanging out around the arc is Santiago Vescovi, who has taken 77 percent of his field-goal attempts this year from distance. Otherwise, Tennessee’s not really a threat to shoot the three unless it has to, as only Victor Bailey tends to shoot much from beyond the arc.

John Fulkerson. Is he healthy, and if so, how effective is he going to be? Tennessee has left the big man questionable for this game, and his presence will go a long way toward determining how this game will go. Oregon State is not a good rebounding team by any stretch of the imagination (it has a 7’1″ guy averaging 2.4 boards per game; you can do the math), and with Fulkerson operating in the paint, Tennessee could have a boatload of second-chance points available.

But of course, this strategy only works if Fulkerson’s facial surgery leaves him able to play Friday, as this injury is not easy to recover from. If there’s any setback with him playing, Oregon State is in much better shape. To make this work in your favor, I wouldn’t make a bet on the spread in this game one way or another until I know for sure whether or not Fulkerson will be on the court.

The Beavers can keep Santiago Vescovi under wraps. Vescovi is the one player on Tennessee’s roster who unquestionably looks for the 3-pointer on a regular basis, and if he’s hitting, Oregon State’s going to struggle to keep pace. The Beavers’ defense has a different challenge in facing a team that doesn’t shoot a ton of 3’s, but Vescovi will shoot 3’s whenever they’re available. The Beavers have to make sure they don’t get lazy and allow Tennessee to turn their strength against them.

The Volunteers can get the ball inside and hit their shots. Vegas and the public don’t think it’s going to happen, which is why the total is moving toward the under. But the Volunteers have been able to put up big numbers for most of the season, and now that they’re facing a team that doesn’t have a great interior defense, they should be expected to do their fair share of scoring. If they don’t, Oregon State has a chance.

Boy, did Oregon State get the wrong matchup here. The Beavers’ big strength is their dominant 3-point defense, but it’s not that helpful in this game because Tennessee is not a 3-point shooting team. I honestly think Oregon State would have been better off drawing Baylor than Tennessee because their strengths would play incredibly well in that matchup.

In this game, the Beavers face a team that will not settle for deep shots (other than Vescovi) and has no qualms about attacking the basket. That’s not the kind of game Oregon State is built to win. As long as Fulkerson plays, give me the Volunteers. Question: When you bet on college basketball, what odds are you betting into? There’s a 99.5% chance you’re laying -110 odds on sides and totals. Did you know that there’s a ROCK solid book out there where you only are required to lay -105? If you take a minute to do the math on how much you bet over a month or a year, then compare it laying -110 to -105, there’s a REAL GOOD chance you’d have saved HUNDREDS (if not thousands) of dollars in risked money by wagering at the lesser -105 odds. Stop the insanity TODAY and start saving money by signing up at BetAnySports! You’ll be SOOOOO glad you did!