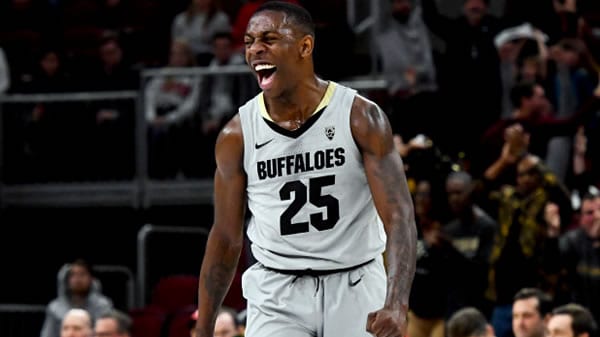 America, meet your potential West Coast bid thief, as Oregon State is now 40 minutes away from qualifying for the NCAA tournament and claiming its first-ever Pac-12 tournament champion. The Beavers haven’t played for the conference tournament title since 1988, but after beating Oregon for the second time this season, they’ve now got a shot to swipe a bid and eliminate a bubble team from the tournament picture.

But to get to Indianapolis, the Beavers will have to solve Colorado, which beat them twice in a span of 12 days back in February. Oregon State wasn’t even close against the Buffaloes when the teams met in Boulder, but fell just four points short of picking them off in Corvallis. That win started a six-game winning streak for Colorado, which is seeking its second Pac-12 tournament title in program history. The Buffaloes have gotten here because of their defense, as they’ve held eight of their past 10 opponents under 65 points, including a 49-point effort from these same Beavers in Boulder. But Colorado doesn’t have the same kind of pressure as Oregon State, as the Buffaloes know that only a case of COVID would keep them out of the NCAA tournament. Can they match the Beavers’ intensity and keep Oregon State out of the Big Dance?

There’s one reason why Oregon State is going to be playing in this game: 6-for-25. That’s what Oregon shot from behind the arc against the Beavers, a mark of Oregon State’s outstanding 3-point defense. The Beavers led the Pac-12 in defending the 3-pointer this season, and Colorado knows all too well about the sting of Oregon State’s defense. When the teams met in Corvallis, the Buffaloes shot 4-for-18 from behind the arc, and if the Beavers had shot well at all, they would have won the game.

That was the main thing the Beavers cleaned up against Oregon, as Ethan Thompson struck for 16 points and played a large role in keeping the Ducks at bay. The problem for Oregon State is that Thompson hasn’t shot it well against anyone but Oregon as of late, which has put a lot of pressure on the rest of the lineup. Warith Alatishe and Jarod Lucas came through for the Beavers against UCLA, but Oregon State’s job would be much easier if all three scorers were contributing against the Buffaloes.

The first few minutes were about as good as Colorado could have hoped for, but the deeper the Buffaloes got into the game, the more precarious their hold on it became. Only the shooting of Jeriah Horne and McKinley Wright IV kept the Buffaloes from losing the lead completely, as both drained four 3-pointers on their way to combining for 43 of the Buffaloes’ 72 points.

And that’s both a reason for Colorado to breathe a sigh of relief and a reason for concern. The Buffaloes were able to defeat the Trojans without getting much from the rest of the team, but that probably isn’t going to work against Oregon State and its perimeter defense. What Colorado will have to do in this game is play tough defense of its own and win the rebounding battle, both of which it did in each of its two wins over the Beavers. Colorado was able to win the rebounding battle against USC and the Mobleys, but that’s also a double-edged sword: will the Buffaloes have anything left in their legs 24 hours after battling the Trojans’ bigs for 40 minutes?

All or nothing. There is no tomorrow for Oregon State if it loses this game, as the Beavers’ record isn’t good enough to get them in the NCAA field and probably isn’t even NIT-worthy. As such, the Beavers are going to give everything they’ve got, which can work either way. When a team that otherwise has no shot to reach the NCAAs gets to this point in a power conference, it tends to throw caution to the wind and become much better than anything it’s shown all season.

Plus, the Beavers have some experience in this situation on their bench. Nobody from Oregon State has ever played in a conference title game, but coach Wayne Tinkle has been in this situation before on four separate occasions when he was the coach at Montana. All of those games were all-or-nothing games, as the Big Sky is a one-bid league, and Tinkle went 3-1 in those situations. Colorado has to find a way to match Oregon State’s intensity if it’s going to derail the Beavers’ dream.

The Beavers can force Colorado to either take bad shots from deep or play inside without fouling. The last place that Oregon State wants to play this game is from the free throw line, because nobody in the country shoots better from the stripe than Colorado’s 83.8 percent. The Beavers will be much better off if the Buffaloes either try to shoot their way through Oregon State’s 3-point defense or opt to pass on the idea altogether and try to attack the interior with mid-range jumpers.

Colorado will Cover If:

The Buffaloes can throw Thompson off his game and force other players to step up to beat them. Oregon State is not a team of great scorers, and when Thompson isn’t hitting, the Beavers usually have a hard time getting wins. If Colorado can frustrate him and keep the score in the low 60s, which they’ve done pretty well as of late, they have the edge.

Colorado is a good team, but the Buffaloes appear to be staggering to the finish line, and I’m not sure if they can match Oregon State’s intensity in this situation. The Beavers should be the more rested and more motivated team, and that’s a strong combination, especially with Oregon State’s perimeter defense. Give me the Beavers to steal a bid to Indianapolis. Make today the day you commit to saving money! Stop wasting your hard earned loot on -110 odds! Take 5 minutes and make the switch to -105 at BetAnySports! You’ll be so glad you did!