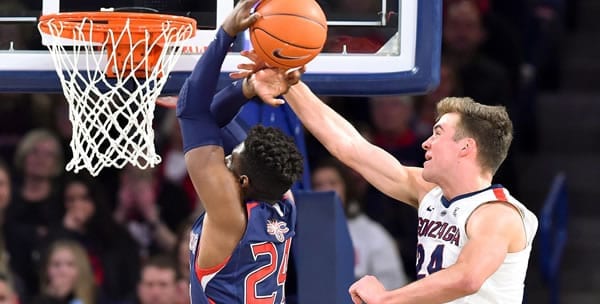 The high-flying scores of the past haven’t been happening as of late for the Waves, who have been struggling to crack 40 percent from the field. A large part of that is Colbey Ross has been struggling to hit from 3-point range. Ross is the Waves’ leader, and when he’s not scoring, it isn’t very easy for Pepperdine to put up much in the way of points. In the Waves’ past two games, Ross shot under 30 percent and just 16 percent from deep. He got away with it against Santa Clara because he got to the free-throw line enough to score 18 points, but against BYU, the Waves couldn’t get anything going, as Ross and Kameron Edwards combined to shoot only 7-for-26 from the field. If Pepperdine isn’t scoring, the hard reality for the Waves is that they don’t have a good enough defense to make up for it against most teams.

Saint Mary’s picked the right year to be the No. 3 squad in the WCC, because the league is strong enough (and the rest of the country is enough of a basket case) for three bids to be a very real thing. Really, it would take a head-scratching loss to keep the Gaels out at this point, and even that might not be enough considering that the only teams Saint Mary’s has lost to in the past six weeks are Gonzaga and BYU, and there’s no shame in losing in either Spokane or Provo.

What helps the Gaels go is their standard pace of play under Randy Bennett and the play of Jordan Ford, who has been the team leader all season and has scored 61 points in Saint Mary’s past two games. Against Pepperdine in the teams’ only meeting, Ford got 26 points and got some help from Malik Fitts and Tanner Krebs, creating a mountain too high for the Waves to wash away. When those three are on, Saint Mary’s is tough to beat.

Rest. The Gaels are in the odd situation of having been sitting around since Feb. 29 because of the WCC’s obscure stepladder bracket. The league created the strange bracket in 2003 after watching its No. 1 seed go down in the championship game and have to settle for the NIT in two out of three years. These days, of course, that isn’t a problem, as Gonzaga has participated in every NCAA tournament since 1999 and has won every WCC regular-season title except 2012 since 2000. But the bracket persists, and that means that higher seeds enter the bracket only after other teams have already been playing. Pepperdine comes in off a win the night before, and that begs the question as to whether the Gaels or the Waves have the advantage with a quick turnaround.

Pepperdine will Cover if:

The Waves can get Ross going, as well as at least one of the two Edwards. Pepperdine has to score and score repeatedly because possessions are going to be at a premium given the slow pace that Saint Mary’s likes to play. The Gaels are one of the slowest teams in the country, and Pepperdine doesn’t play defense well enough to speed up the Gaels. The Waves have to score to get Saint Mary’s out of their comfort zone.

The Gaels can get the lead at the 10-minute mark of the second half. Pepperdine is not great at overcoming deficits, and the Waves definitely can’t count on overcoming a deficit against this squad, because Saint Mary’s has four starters who shoot 75 percent or better from the free-throw line, including its three top scorers. All three of Jordan Ford, Malik Fitts, and Tanner Krebs shoot above 80 percent from the foul line, and if the Gaels get themselves a lead, Pepperdine’s only chance will be to hit 3-pointers.

Don’t underestimate the Waves’ ability to play with their opponent until the end. Pepperdine has shown a surprising ability to make life difficult for some of the better teams in the WCC. They took San Francisco to overtime on the road, dropped two to Gonzaga by an average of 8.5 points, and played Saint Mary’s to a nine-point tussle. However, Pepperdine isn’t quite scoring the way that it usually does. The Waves come into this game having failed to score 70 points in three of their past four games, and that’s music to Saint Mary’s ears, because the Gaels love to slow the game down.

If this line were a little bit higher, I’d be all over Pepperdine. But when the Waves aren’t scoring a ton, they’re much easier to beat, and lately, the only team they’ve been putting up points against is the Santa Clara team that they just knocked out of the tournament. Give me the Gaels here! Bet this game and ALL your sports bets at -105 odds instead of -110! Making the switch to reduced juice betting WILL save you THOUSANDS of dollars over the years! It trumps any bonus you can get! Click here to start betting wiser TODAY!