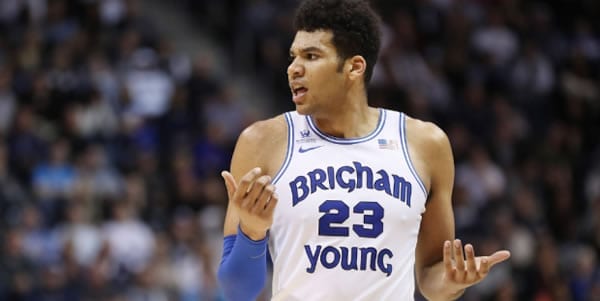 Jordan Ford and Saint Mary’s had to work for their win over Pepperdine, but they got it, and they’ve set up a showdown with BYU in the non-Gonzaga semifinal. These two teams were basically even in terms of who they were and the way they liked to play, which is why they split their meetings this season, and the two matchups were decided by a total of five points between them. Saint Mary’s is one of the rare teams that can score with both BYU and Gonzaga, and the reason is that the Gaels get good looks at the hoop.

Nobody in red and blue does this better than Ford. He has proven so adept at both scoring and decision making that he hasn’t come out of four of the Gaels’ past five contests, and the one match he did sit for was a 92-63 pasting of San Diego, where Ford didn’t need to be on the court for all 40 minutes in a well-decided ball game. Ford sat for just three minutes in that contest, despite the lopsided margin of victory. Against BYU, there won’t be a lopsided anything, and the Gaels will have to work for everything they get. With Ford coming off 42 points against Pepperdine, the Gaels simply have to get him some help. Getting Malik Fitts going would make for a great start.

Remember Jimmer Fredette and his success at Brigham Young? Well, here’s one thing that Jimmer never did in Provo: win a conference tournament. BYU hasn’t won one since 2001, but the Cougars have often been good enough to make the tournament without getting success inside the league.

But Yoeli Childs anchors the BYU attack well enough to have won nine consecutive games, vaulting BYU from being on the bubble a month ago to being safely in the field and likely to get a pretty high seed. The Cougars have made Childs the main focus of their attack during their win streak, and he has more than responded, scoring in double figures in all but one game this year. In the past four games, he’s combined for 105 points, an average of 26.25 points per game. That’s lifted BYU to the fifth-most efficient offense in the country and made the Cougars a nightmare for other squads to try to stop. BYU doesn’t play particularly fast, but the thing that the Cougars don’t do is they don’t waste their possessions. When BYU attacks, it’s usually with a high-percentage look at the basket. Over time, that turns into a lot of points, which is one reason that the Cougars have hit 80 or more points in eight of their past ten contests.

Fatigue or lack thereof. The WCC tournament is unlike any other conference tournament in the country because of the presence of BYU. The entire tournament must take Sunday off in case the Cougars were set to play in that round because the team will not play on Sundays under any circumstance. That could play a role in this matchup because Saint Mary’s had to go double overtime with Pepperdine in the quarterfinals, which could have been devastating if the Gaels had to play again in less than 24 hours. However, Saint Mary’s has had a chance to rest because of the Sunday rule, and that could give the Gaels a significant advantage because they’ve got the experience of shooting in Las Vegas in a game situation without having to sacrifice their energy. BYU has to get off to a strong start and adjust quickly to Vegas.

The Gaels can turn their rebounding edge into points. Saint Mary’s didn’t win the rebounding battle by much in the teams’ first two meetings, but it did win the battle. In Moraga, The Gaels are kind of a weird team to figure out, because Saint Mary’s plays a slower tempo but puts up a lot of points. That’s because Saint Mary’s also gets a good amount of offensive rebounds, grabbing 11 in the win over BYU earlier in the year. Second-chance point are a killer, and Saint Mary’s needs to make them work.

BYU will Cover if:

The Cougars can dominate the interior. The easiest way to neutralize a great rebounding team is not to give them a chance to extend their possessions. BYU has the height inside to keep Saint Mary’s off the glass, and if the Cougars can use that size properly, they can give themselves a lead that Saint Mary’s cannot match.

These teams tend to play games that go down to the wire, so I don’t want to give up points with either squad. Both games were decided by a possession, both teams are talented, both sides are motivated, and both know that they can beat the other. This game is as close to a coin flip as it gets, so I want my free four points with the Gaels here in a game that is far too close for me to consider betting. Give me Saint Mary’s, and if you must wager on it, consider the over. Bet this game for FREE by depositing $100 at MyBookie! They will then add a FREE $100 bet to your account balance! (You can use it for smaller plays too). Must sign up through this link and use promo code PREDICT100.