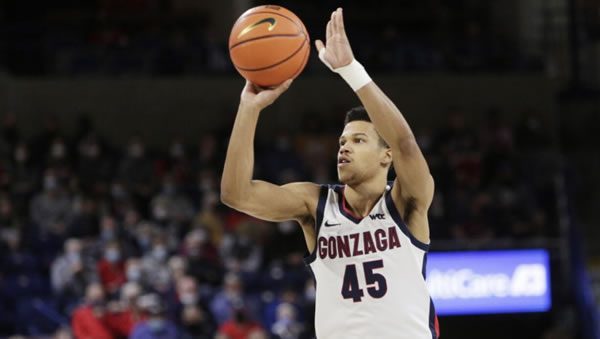 In a week, San Francisco will be appearing in NCAA brackets for the first time since 1998, and almost nobody really has any clue just how good this team is. That’s because the Dons are the first real example of a team using the metrics and nothing else to earn their way into the field. The best win the Dons have all season is either BYU in Vegas or Davidson at home, and neither of those teams are certain to make the field. Otherwise, San Francisco’s entire profile consists of nothing but being able to play against teams like Gonzaga, Saint Mary’s and Loyola-Chicago and lose all of those contests.

And yet, the Dons project as a No. 9 seed, because their metrics are excellent and Gonzaga and Saint Mary’s are both seen to be on another level entirely this season. The Dons have taken two losses to the Bulldogs this year, and both came by 16 points. A win here would absolutely leave no doubt about their spot in the field, but even a close loss would probably leave the Dons feeling very secure. About the only thing San Francisco can’t afford to do is lose by 30.

They should be able to avoid that, but the question is whether that will be enough to earn the cover. Gonzaga doesn’t really have anything to play for here, as the Bulldogs have long since locked up a No. 1 seed and know that they’ll be opening against some No. 16 in Portland in a little over a week. But the Bulldogs are actually facing the Dons at an awful time for San Francisco, because Gonzaga is coming off a rare loss and to a WCC opponent. The last thing the Bulldogs want is to go into the tournament having lost two straight, so this could be a situation where San Francisco is grateful for the work it’s already done, because the Dons might be in the wrong place at the wrong time.

Jamaree Bouyea is exactly the kind of player that can frustrate a big-name opponent in the NCAA tournament, as he’s put up big numbers against WCC competition and is one of the biggest reasons why the Dons have gradually built themselves into team No. 3 in the league behind Gonzaga and Saint Mary’s.

If San Francisco is going to have a chance to beat Gonzaga, Bouyea has to step up more than he did in the teams’ most recent meeting, an 89-73 win for the Bulldogs in San Francisco. In that game, the Dons got contributions from all over the floor point-wise, including 17 from Khalil Shabazz, but the problem was that the Dons had to take 65 shots to score 73 points.

Beating Gonzaga’s defense won’t be easy, especially because San Francisco is going to have a hard time getting any rebounds against the Gonzaga frontcourt. The Dons have to be prepared to his some shots in this one.

They’re also excellent shooters and willing to make teams run with them. Gonzaga has the ability to play slowdown, but it’s clearly not the way the Bulldogs like to play (which is why Saint Mary’s is always the one team that has a chance against them). That’s actually led to them being an under team more often than not, as their reputation precedes them so much that people intrinsically think Gonzaga means points. While the Bulldogs usually do put up a lot of points (they lead the nation at 88.3 PPG), they can also play pretty solid defense. Teams only shoot 37.6% against Gonzaga, third in the nation.More Picks: Get Our capper’s Santa Clara Broncos vs Saint Mary’s Gaels Best Bet >>>

San Francisco will Cover If: The Dons can hit a few shots. San Francisco cannot afford to play this game on the glass, because it will not work out for them. The Dons have to stay in the game by finding good shots and hitting them to mitigate Gonzaga’s huge edge on the boards.

Gonzaga will Cover If: The Bulldogs can get off to a quick start. This is the kind of game where the Bulldogs need to simply bury their opponent in the opening 10 minutes and get themselves ready for what will likely be a rubber match with Saint Mary’s tomorrow. The Bulldogs have the talent for a blowout; it’s a question of mentality.

This is the bet I feel best about, as Gonzaga has been stewing for nine days about not only losing to Saint Mary’s, but having to play at the Gaels’ pace. San Francisco is much more willing to run than Saint Mary’s, and the Dons have only played one game in Las Vegas (and did it Saturday thanks to BYU’s refusal to play on Sundays) and should be rested enough to keep up. I really like the over here.

If Gonzaga were coming off a win, I’d back the Dons in this spot. However, the Bulldogs are going to come in looking to make a statement, and when the Bulldogs get in that kind of mood, nobody in the WCC has the talent to stop them. San Francisco will fight gamely, but there’s a big difference between a top overall seed and a team that’s heading for a No. 9 or No. 10 seed. Give me the Bulldogs. Bet your Dons/Zags pick and ALL your college hoops picks for FREE this week by taking advantage of a 100% REAL CASH bonus on your first deposit of $100 to $1000 at Betnow Sportsbook!