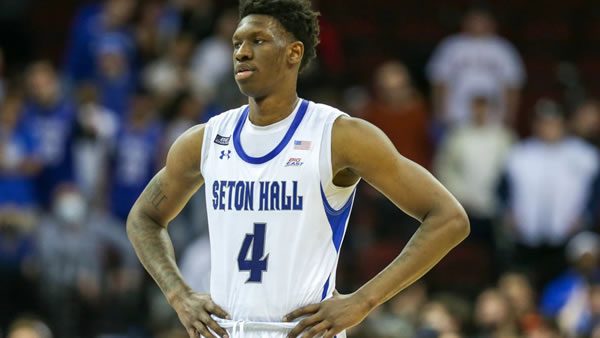 The Seton Hall Pirates are a large -8.5 favorite when they head to Washington to take on the struggling Georgetown Hoyas, losers of seven consecutive games. Tip-off for Tuesday night game is 8:30 PM ET.

This game opened as high as Seton Hall -9.5 at some of the books that cater to more recreational bettors but has now settled in at -8.5 across the board. The O/U line hasn’t seen any movement holding at the openers of 142 to 142.5.

Seton Hall picked up a victory over Butler by a score of 76-51. Heading into the game, the Pirates were favored to win, with a point spread of -4.5. The combined 127 points were below the 131.5 total line.

Georgetown most recently fell to Marquette (95-73). Not only did the Hoyas lose straight-up, but they picked up an ATS defeat as +18 point underdogs. The combined 168 points finished above the 156 total line.

Seton Hall
Over their last five games, Seton Hall has a straight-up record of 2-3 while going 3-2 vs. the spread. Over this stretch, the Pirates’ offense is averaging 72.8 points per game while hitting 47.1% of their shots from the field. On the defensive end of the floor, they have allowed opponents to shoot 43.6% from the field while allowing 71.2 points per contest.

Georgetown
In their previous five contests, Georgetown is 0-5 straight-up and 1-4 vs. the spread. In these five games, they have a scoring average of 66.0 points per game on a shooting percentage of 42.1%. Defensively, they are allowing teams to hit 48.4% of their shots while giving up 83.0 points per game.

This season, the combined power rating of Seton Hall’s opponents comes in at 77.2. On the other side, Georgetown’s combined opponent power rating sits at 78.1.

How Does Seton Hall Fare On The Road?

For the season, the Pirates have played six road games and have a record of 2-4. In these contests, Seton Hall is 3-3 vs. the spread. Offensively, they have averaged 63.3 points per game on a shooting percentage of 41.2%. On defense, the Pirates are allowing 73.7 points per contest when playing away from home. So far, opposing teams have a field goal percentage of 47.4% in these games.

How Does Georgetown Fare At Home?

For the season, Seton Hall is averaging 72.9 points per game (150th) while posting an overall field goal percentage of 42.3%. In today’s game, they will be matched up against a Georgetown defense that has allowed an average of 78.4 points per contest. This year, opponents have hit 45.7% of their shots vs. Georgetown. On the other side, the Georgetown Hoyas are coming into the game averaging 70.7 points per game on a shooting percentage of 40.0%. The Hoyas will be facing a defensive unit allowing an average of 64.4 points per contest. So far, teams have hit 40.3% of their shots vs. the Pirates.

From beyond the arc, Seton Hall has a shooting percentage of 34.0% while ranking 379th in attempts per game. The Pirates will be facing a Georgetown defense that has a 3-point field goal shooting percentage allowed of 36.8%. Georgetown enters the game, hitting 34.2% of their looks from deep while averaging 7.65 made 3’s per game. On the other end, Seton Hall has allowed opponents to hit 29.2% of their shots from beyond the arc.

The Hoyas have been blown out in their last three at home, but they played reasonably well in the first half in the last three, leading Marquette 36-34 at the break, and were an even 35-35 versus Villanova. Seton Hall has improved in recent games, but they do average just 29.2 first-half points on the road and 34.9 against. The Hoyas have a positive differential, having outscored the opposition at the half in their home matches 36.1 to 34.6. Take Georgetown +4.5 in the first half. Bet your NCAA basketball  predictions for FREE this week by scoring a 100% real cash bonus up to $500 when you enter bonus promo code PREDICTEM at Betnow Sportsbook!