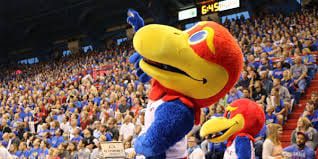 TCU has won nine consecutive games, but up until edging Baylor, the Frogs hadn’t really played anyone of consequence. This win showed that TCU can beat solid teams even without its point guard, as the Frogs found themselves down Jaylen Fisher but had enough left to get past the Bears. TCU gets the job done well at both ends of the floor and is versatile enough to win games by both outscoring its opponents and locking down on defense. But the best thing about TCU is how well it moves the ball around to make smart decisions without making mistakes. The Frogs average 20 assists to 12 turnovers per game, a sign of a well-coached team.

It wasn’t bad enough for Kansas that it again fell victim to Hilton Magic on its trip to Ames with Udoka Azubuike on the sidelines. Things got worse for the Jayhawks when they learned after the game that Azubuike is done for the year with an injured hand. That’s going to put even more pressure on Dedric Lawson to carry the load for the Jayhawks, who don’t have the inside presence that has normally been a part of Bill Self’s top teams. Kansas has already had its problems with making smart decisions this season, and losing their top interior offensive weapon will turn the Jayhawks into more of a perimeter-based team — which means shooting 30 percent from 3-point range while allowing the opponent to shoot 52 percent, as Iowa State did, simply won’t work.

Allen Fieldhouse. For whatever reason, the Jayhawks’ legendary home court isn’t the intimidating feature it usually is when the Frogs are the visitors. TCU hasn’t yet managed to go into Lawrence and win, but it’s played Kansas much tougher than one would expect. Despite what has generally been a wide gulf in talent between the Jayhawks and the Frogs, three of their past four meetings at Allen Fieldhouse have been decided by nine points or less, including last year’s 81-74 tilt. But on the other side of the coin, TCU is catching Kansas at a time when it hasn’t played anyone on the road but SMU, which could make intimidation the factor that it hasn’t previously been this time around.

TCU will Cover if:

The Frogs can win the battle on the perimeter. Kansas is still trying to adjust to its new realities, and TCU can shoot the ball well enough to take advantage of that fact. This game will be the ultimate test of just how well TCU can move the ball and just how good the Frogs’ decision-making really is. Iowa State showed that Kansas is vulnerable against an opponent that can find the open man and get good looks, and if TCU can knock them down, this game is there for the Frogs to take.

The Jayhawks can control the rebounding battle. If ever there was a game where it’s OK for Kansas to be without its inside presence, this might be the one. Kansas isn’t a great rebounding team, but the Frogs’ one veteran rebounder, Yuat Alok, is out with a broken wrist, leaving TCU vulnerable on the glass. If Kansas can get itself two or three looks at the basket on the majority of its possessions, TCU won’t be able to keep up.

If TCU was at full strength, I’d have to take the Frogs here. The reality is that there are a lot of question marks with Kansas and how well it will adjust to losing Azubuike after Iowa State crushed the Jayhawks over the weekend. But if there’s one thing I’ve learned in college basketball over the past decade, it’s that you don’t tend to make money going against Bill Self in Allen Fieldhouse.

There’s a reason that Kansas has won at least a share of the Big 12 title every year since 2004, and it’s not because the Jayhawks tend to be vulnerable at home. When Kansas seems to be at its most vulnerable, that’s usually when Self is at his best.

There’s another reason why I’ve got to take the Jayhawks here: TCU hasn’t shown that it can do anything on the road. The Frogs have played all of one road game, and it was against Metroplex rival SMU, which hardly counts. Taking a team in its first real road test when that road test is in Lawrence is almost always a bad strategy. Throw in that Jaylen Fisher either won’t play or won’t be at full strength if he does, and I’m just too skittish about TCU to gamble on the upset. I’ll take the Jayhawks and lay the six.