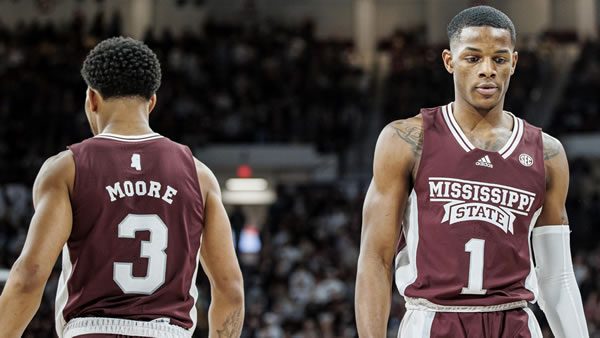 The good news for Mississippi State is that the Bulldogs have just one loss at home all season. The bad news is that none of the NCAA tournament games will be played there, meaning the Bulldogs’ resume is a gigantic mess that has them on the outside looking in at the field. Mississippi State is in “better not lose” territory for this game, as the Bulldogs don’t really have a lot of time left to build their profile and really can’t afford any defeats at home, even against a team as talented as Tennessee.

The Volunteers have a much stronger resume and far more of a reason to feel good about their situation going into March. Tennessee has won five of its past six, with the loss being a one-point loss in Austin that won’t damage their profile in the slightest. At this point, as long as the Vols don’t stub their toe against Missouri or Georgia, they’ll be in fine shape for the NCAAs. Any win they can get besides those two games is only going to help build their profile and get them a more reasonable first-round matchup, so there’s a lot on the line for both sides. There’s another significant factor working here: the double-bye in the SEC tournament. With Auburn and Kentucky basically locked into a top-four spot and Arkansas surging, Mississippi State needs to win to avoid falling out of the race for the top four. If Tennessee claims a win, the Vols will be two games up on the rest of the conference for fourth place.

When you keep your opponent around 40 to 45 percent from the field, you can usually get away with taking your time to get the offense going. The Volunteers tend to struggle in the opening few minutes and make bettors wonder why they bothered backing them, but if they can hang around for the first 10 minutes, Tennessee usually finds its gear at that point and starts to get rolling.

That proved the case in the Florida game, where Tennessee built itself a double-digit deficit before coming back to earn the cover. The Vols have ridden their defense all season, and it’s only recently that overs have entered the equation as Tennessee develops a combination of improving their offense and facing a few weak defenses.

Two things make the Vols dangerous on offense. First, even though Santiago Vescovi and Kennedy Chandler lead them in scoring, almost everyone the Vols put on the floor contributes to the attack in some way. Second, if Tennessee gets a lead in the final 10 minutes, the game is essentially on ice: save for Chandler, all five Tennessee starters shoot 70% or better at the line.

It’s a good thing this game is at home because the Bulldogs have a grand total of zero wins away from Humphrey Coliseum. One of the biggest disparities between the Bulldogs at home and Mississippi State on the road came in the season series with Mississippi, as Mississippi State shot 54.7 percent in the game in Starkville and 44.1 percent from the floor in a loss in Oxford.

This is not a team that will try to beat you with the 3-point shot. This team is instead going to focus on trying to find good shots and knock them down, and it’s usually willing to work the ball around to do that. The problem is that when one of their shooters has a bad night, it’s tough for them to get things done. Against Arkansas, Iverson Molinar was the Bulldogs’ primary shooter, but he connected on just 7 of 18 shots, leaving the Bulldogs scrambling for points.

Tennessee will Cover If: The Volunteers can avoid falling behind early. Tennessee cannot afford to build the hole too deep against a Mississippi State squad that really needs this game. If the Bulldogs can build momentum, this won’t work.

Mississippi State will Cover If: The Bulldogs can find a few good shots and knock them down early. This is likely one to live-bet because the first 10 minutes will tell a lot about both squads.

Don’t look for this to turn into a rock fight. Mississippi State is much more willing to run in Starkville, and the Bulldogs have gotten above 67.5 12 times in 13 games at Humphrey Coliseum this season, with the lone exception being a 20-point rout of Morehead State. The Bulldogs can score when they want to, and I think they will here.

When you’re getting points with a desperate home team that has just one loss in its building, take them and run with it. Mississippi State must have this game to stay in the mix for a bid. I’ll back the Bulldogs to get it. Bet your Vols/Bulldogs pick and ALL your college basketball bets for FREE this week by scoring a 100% real cash bonus on your first deposit of $100 to $500 at GTBets!