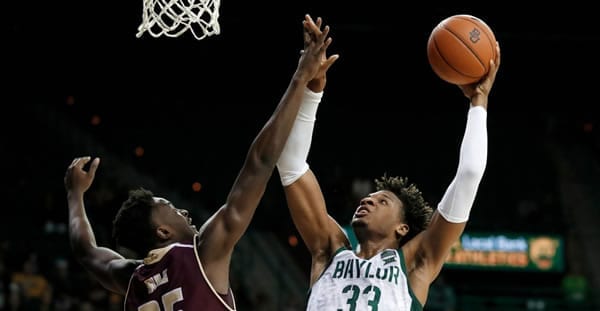 What happens when Texas Tech sees its offense disintegrate? The results are not pretty. The Red Raiders have now lost three of their past five games and have failed to exceed 70 points in four of their previous five games. The one exception was against a collapsing Iowa State squad, and other than that, Texas Tech has been struggling badly on offense as of late. Case in point: the Red Raiders managed a mere 58 points against Texas at home. Games against the Longhorns tend to be low-scoring affairs. But, the reality is that that’s the lowest the Red Raiders have scored in Lubbock against anyone but Baylor.

Here’s the other reality: while Texas Tech was missing shots, Texas shot 45.5 percent from the line. Texas Tech needs to have its defense in top form on a good day to succeed; when Davide Moretti and Kyler Edwards are a combined 5-for-20 from the floor, and the defense goes missing in action, losses are the only inevitable consequence.

Sitting on top of the college basketball world for so long finally took its toll on the Bears, who have been getting everyone’s best shot for a long time and eventually succumbed to both Kansas and TCU, with the latter defeat coming at home. But the question now must be asked: was this merely a bad game for the Bears, or was it a sign of things to come?

Nobody saw this coming with Baylor this year, and the Bears have a long history of folding when it matters most. The reason for the concern is that Baylor lost to the Frogs by falling apart on defense. The defense has been the most consistent strength of its squad as long as the opponent hasn’t been Oklahoma State. Even against Kansas in the loss in Waco, the Bears only fell because their offense let them down, rather than the defense. If the Bears are letting opponents shoot 45 percent from beyond the 3-point arc, this team could be ripe for an early upset.

But at the same time, it’s one game. It’s far too early to panic about the defense for a team that has been excellent at that end all season long. Baylor has still only trailed in the second half in 3 of 16 Big 12 games all season, so there’s still reason to trust Scott Drew and his team.

Mental mindset. Baylor and Texas Tech are both defense-oriented teams who have seen their defense let them down in their most recent appearance on the floor. That’s tough to overcome when your biggest strength gets exploited by an opponent, and it can cause you to have doubts about your abilities as a player. That can easily allow you to turn one loss into two, and when that happens, it’s tough to start pushing the boulder back up the mountain. These teams need to get some positive signs of progress before the Big 12 tournament.

The Red Raiders can at least compete on the boards. In Lubbock, Texas Tech never came close to being competitive on the glass, as Baylor won the rebounding battle 44-25 on its way to a five-point win. The Red Raiders have to make sure they’re at least ending Baylor’s possessions after one or two looks at the basket and not giving the Bears extra looks at the hoop. If they can do that, they have a chance here.

The Bears can take care of the basketball. The one reason that Baylor played such a tight game in Lubbock despite winning the rebounding battle and both teams struggling to shoot was that the Bears couldn’t stop turning the ball over. Baylor finished that game with 20 turnovers, and the Bears were honestly a little fortunate to escape with a five-point win. This time, Baylor has to take care of the ball and prevent Texas Tech from building confidence.

If totals are your thing, you might want to bet the under here. It’s rather high for a matchup between these two squads, as it’s expecting the Red Raiders to figure out what ails the offense here and push the game to feature a lot more scoring than the 57-52 affair in Lubbock. But there’s no guarantee that Texas Tech does figure out the offense, and it seems that the Red Raiders are catching Baylor at the wrong time. Not only are the Bears angry about a loss, but they’re motivated to get that No. 1 seed and be able to play the regionals in Houston.

Texas Tech just isn’t on that level this season, and I cannot see the Red Raiders figuring things out in Waco. Give me the Bears to get the cover. STOP laying -110 odds on games! You’re overpaying! Start laying only -105 today at the web’s best betting site —> 5Dimes!